The Sanjak of Smederevo (Turkish : Semendire Sancağı; Serbian : Смедеревски санџак / Smederevski sandžak), also known in historiography as the Pashalik of Belgrade (Turkish : Belgrad Paşalığı; Serbian : Београдски пашалук / Beogradski pašaluk), was an Ottoman administrative unit (sanjak), that existed between the 15th and the outset of the 19th centuries. It was located in the territory of present-day Central Serbia, Serbia.

During the governorship of Hadji Mustafa Pasha (1793–1801), the administration was expanded eastwards to include the Kladovo area, until then part of the Sanjak of Vidin. [1]

The Sanjak of Smederevo was formed after the fall of the Serbian Despotate in 1459, and its administrative seat was Smederevo. Ottoman sources note a migration of "Vlachs" (pastoralists) to the Sanjak of Smederevo and parts of the Sanjak of Kruševac and Sanjak of Vidin; in 1476 there were 7,600 Vlach households and 15,000 peasant households. [2] In the 1470s, because of the fighting with the Hungarians many areas in northern Serbia were deserted. Ottomans start colonize that area with Vlachs as a military element, and this colonization includes entire territory of the Sanjak of Smederevo, most of Sanjak of Kruševac and Vidin. Vlachs to that area coming from Bosnia, Herzegovina, Montenegro and from Stari Vlah (İstari Eflak) region in the southwestern Serbia. [3] [4]

After the Ottoman Empire conquered Belgrade in 1521, the administrative seat of the Sanjak was moved to this city. In this period when the Battle of Mohács took place the sanjakbey of Smederevo was Kučuk Bali-beg. [5] Ottoman campaigns against Hungary in 16th century reduced part of the population which migrated to the Hungarian territory, according to tax registrations from 1476 and 1516 about 17% villages were abandoned. Ottoman resettle abandoned lands with populations from neighboring district which were mostly semi-nomadic Vlach groups from area of Bosnia, Hercegovina, Montenegro, and Stari Vlah in Serbia. Vlachs made up 15% of the population in Smederevo in 1516. [6] According to Noel Malcolm in Ottoman defters from 16th century, in Smederevo area there were about 82,000 of mostly Vlach families. [7] Benedikt Kuri-pečič in the 16th century noted that (Orthodox) Serbs "who call themselves Vlachs" moved from Smederevo and Belgrade to Bosnia and are part of three peoples inhabited in Bosnia alongside with (Muslim) Turks and (Catholic) old Bosnians. [8]

The Sanjak was occupied by the Habsburg Monarchy as the Kingdom of Serbia (1718–39), however, with the Treaty of Belgrade, the area was ceded to the Ottoman Empire. Belgrade, the center of the region while under Austrian rule, was neglected under the Ottomans and Smederevo (Semendire) was the administrative center. Nevertheless, Belgrade eventually became the seat of a pasha with the title of vizier and the Sanjak began to be referred to as the Pashaluk of Belgrade, although it was still called the Sanjak of Smederevo in official documents.

In 1788, Koča's frontier rebellion saw eastern Šumadija occupied by Austrian Serbian freikorps and hajduks. From 1788–91, Belgrade was again under Austrian rule after Koča's rebellion. The Siege of Belgrade from 15 September to 8 October 1789, a Habsburg Austrian force besieged the fortress of Belgrade. The Austrians held the city until 1791 when it handed Belgrade back to the Ottomans according to the terms of the Treaty of Sistova.

In 1793 and 1796 Sultan Selim III proclaimed firmans which gave more rights to Serbs. Among other things, taxes were to be collected by the obor-knez (dukes); freedom of trade and religion were granted and there was peace. Selim III also decreed that some unpopular janissaries were to leave the Belgrade Pashaluk as he saw them as a threat to the central authority of Hadji Mustafa Pasha. Many of those janissaries were employed by or found refuge with Osman Pazvantoğlu, a renegade opponent of Sultan Selim III in the Sanjak of Vidin. Fearing the dissolution of the Janissary command in the Sanjak of Smederevo, Osman Pazvantoğlu launched a series of raids against Serbians without the permission of Sultan Selim III, causing much volatility and fear in the region. [9] Pazvantoğlu was defeated in 1793 by the Serbs at the Battle of Kolari. [10]

In the summer of 1797 the sultan appointed Mustafa Pasha on position of beglerbeg of Rumelia Eyalet and he left Serbia for Plovdiv to fight against the Vidin rebels of Pazvantoğlu. [11] During the absence of Mustafa Pasha, the forces of Pazvantoğlu captured Požarevac and besieged the Belgrade fortress. [12] At the end of November 1797 obor-knezes Aleksa Nenadović, Ilija Birčanin and Nikola Grbović from Valjevo brought their forces to Belgrade and forced the besieging janissary forces to retreat to Smederevo. [13] [14] By 1799 the janissary corps had returned, as they were pardoned by Sultan's decree, and they immediately suspended the Serbian autonomy and drastically increased taxes, enforcing martial law in Serbia.

On 15 December 1801, the popular Vizier of Belgrade Hadji Mustafa Pasha, a trusted ally of Selim III, was murdered by Kučuk Alija. Alija was one of the four leading Dahijas, Janissary commanders who were opposed to the Sultan's reforms. [15] [16] This resulted in the Sanjak of Smederevo being ruled by these renegade janissaries independently from the Ottoman government. Several district chiefs were murdered in the Slaughter of the Knezes on February 4, 1804, by the renegade janissaries. This sparked the First Serbian Uprising (1804–13), the first phase of the Serbian Revolution. Despite suppression of the uprising in 1813 and Hadži Prodan's Revolt in 1814, the Second Serbian Uprising led by Duke Miloš Obrenović succeeded with creation of semi-independent Principality of Serbia in 1817 (confirmed with Ferman from Mahmud II in 1830), gained independence in 1878 by Treaty of San Stefano and evolved to Kingdom of Serbia in 1882. This marked the end of the Sanjak.

The majority of Slavic-speaking Muslims (called "Serb-Muslims" in historiography) in the Belgrade Pashalik were immigrants. [17] These were mostly villagers, but also feudals, soldiers, officials, and some were among the highest social class, in the administration. [17]

The proportion of Muslims was notably decreased in the late 17th and first half of the 18th century, after a major influx of Serbs (Christians) from outlying territories, mostly from Dinaric areas. [1]

The Sanjak of Smederevo was one of six Ottoman sanjaks with most developed shipbuilding (besides sanjaks of Vidin, Nicopolis, Požega, Zvornik and Mohač). [18]

Veljko Petrović, known simply as Hajduk Veljko, was one of the vojvodas of the Serbian Revolutionary forces in the First Serbian Uprising against the Ottoman Empire, in charge of the Negotin area. He was one of the biggest heroes of the Uprising. 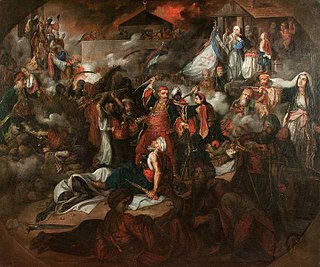 Osman Pazvantoğlu was an Ottoman soldier, a governor of the Vidin district after 1794, and a rebel against Ottoman rule. 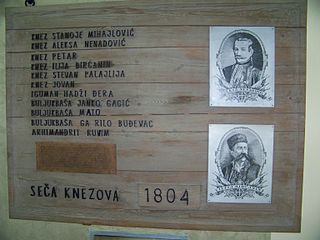 The Slaughter of the Knezes was the organized assassinations and assaults of noble Serbs in the Sanjak of Smederevo in January 1804 by the rebellious Dahije. Fearing that the Sultan would make use of the Serbs to oust them, they decided to execute leading Serbs throughout the Sanjak. A total of 72 noble Serbs were assassinated, and their heads were put on public display. Notable victims were Aleksa Nenadović and Ilija Birčanin. The event triggered the First Serbian Uprising, aimed at putting an end to the centuries of Ottoman occupation. 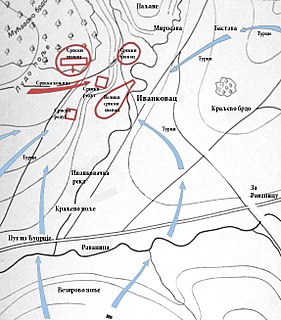 The Battle of Ivankovac was the first full-scale confrontation between Serbian revolutionaries and the regular forces of the Ottoman Empire during the First Serbian Uprising. The battle ended with a Serbian victory and prompted Ottoman Sultan Selim III to declare jihad against the Serbs. 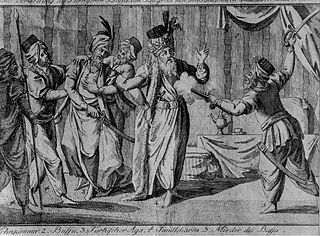 Hadji Mustafa Pasha was an Ottoman commander and politician of Greek Muslim origin who lived in Sanjak of Smederevo. He fought in the Austro-Turkish War (1787–1791) and the Russo-Turkish War (1768–1774). In the period between 1793 and 1801 he was Vizier of the Sanjak of Smederevo. On 15 December 1801 he was murdered by Kuchuk Alija, one of four rebel Janissary leaders (dahije) who took control over the sanjak.

Aleksa Nenadović was ober knyaz of Tamnava—Posavina district of Valjevo nahiyah of the Belgrade Pashaluk.

Kučuk-Alija was a janissary, mutesellim of Kragujevac and one of four Dahiyas who controlled the Sanjak of Smederevo in the period between 15 December 1801 and the beginning of the First Serbian Uprising in Spring 1804. He was a brother of Sali Aga, a mutesellim of Rudnik Ottoman nahiyah at the beginning of 19th century. 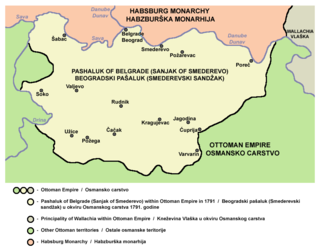 Obor-knez was a title borne by elected local native Serbian chiefs (Knyaz) of the nahiyah in the Ottoman Sanjak of Smederevo. The obor-knez was senior chief and responsible for his district's people and was their spokesman (intermediary) in direct relations with the Pasha, though usually through the sipahi, and was in charge of the transfer of taxes levied on the villages. The vojvoda and obor-knez titles were given to people approved by the Pasha. The title was hereditary, being succeeded by one's son. The obor-knez, as a senior, had several knezes under him, who held sub-districts or one village each. 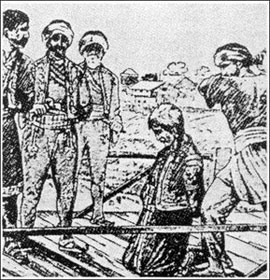 The Dahije or Dahijas were the renegade Janissary officers who took power in the Sanjak of Smederevo, after murdering the Vizier Hadži Mustafa Pasha of Belgrade on 15 December 1801. The four supreme dahije leaders were Kučuk Alija, Aganlija, Mula Jusuf and Mehmed-aga Fočić. Rebels against the Ottoman sultan, they were defeated by the Serbs in the initial phase of the First Serbian Uprising, which is also called "Uprising against the Dahije".

The Serbs in Turkey are Turkish citizens of Serbian descent or Serbia-born people who reside in Turkey.

Konda was a mercenary in Alija Gušanac's Dahije detachment in the Sanjak of Smederevo who switched sides to the Serb rebels during the First Serbian Uprising, proclaimed a hero for his efforts in the Siege of Belgrade (1806).

Nikola Grbović was a Serbian obor-knez of the Kolubara knežina of the Valjevo nahija in the Sanjak of Smederevo, who later became a Serbian Revolutionary. He was born in Mratišić. He was active in the formation of the district and the Ottoman Serb civil army from 1793–94 to 1796, and took part in the operations against Janissary leader Osman Pazvantoğlu. At the end of November 1797 obor-knezes Aleksa Nenadović, Ilija Birčanin and Nikola Grbović from Valjevo brought their forces to Belgrade and forced the besieging janissary forces to retreat to Smederevo. He participated since the outbreak of the First Serbian Uprising, organizing a detachment of his knežina together with his son Milovan. He was a rebel delegate in the talks with Bekir Pasha in 1804. He participated in the liberation of Valjevo and in the first fights around Belgrade.

Aganlija was an Ottoman janissary leader that defected and along with three other janissary leaders took control over the Sanjak of Smederevo in 1801. These renegade janissaries were known as the Dahije.