A Tier 2 network is an Internet service provider which engages in the practice of peering with other networks, but which also purchases IP transit to reach some portion of the Internet.

Tier 2 providers are the most common Internet service providers, as it is much easier to purchase transit from a Tier 1 network than to peer with them and attempt to become a Tier 1 carrier.

The term Tier 3 is sometimes also used to describe networks who solely purchase IP transit from other networks to reach the Internet.

The Internet is the global system of interconnected computer networks that uses the Internet protocol suite (TCP/IP) to communicate between networks and devices. It is a network of networks that consists of private, public, academic, business, and government networks of local to global scope, linked by a broad array of electronic, wireless, and optical networking technologies. The Internet carries a vast range of information resources and services, such as the inter-linked hypertext documents and applications of the World Wide Web (WWW), electronic mail, telephony, and file sharing.

In computer networking, peering is a voluntary interconnection of administratively separate Internet networks for the purpose of exchanging traffic between the "down-stream" users of each network. Peering is settlement-free, also known as "bill-and-keep," or "sender keeps all," meaning that neither party pays the other in association with the exchange of traffic; instead, each derives and retains revenue from its own customers.

The Internet backbone may be defined by the principal data routes between large, strategically interconnected computer networks and core routers of the Internet. These data routes are hosted by commercial, government, academic and other high-capacity network centers, as well as the Internet exchange points and network access points, that exchange Internet traffic between the countries, continents, and across the oceans. Internet service providers, often Tier 1 networks, participate in Internet backbone traffic by privately negotiated interconnection agreements, primarily governed by the principle of settlement-free peering.

A Tier 1 network is an Internet Protocol (IP) network that can reach every other network on the Internet solely via settlement-free interconnection. Tier 1 networks can exchange traffic with other Tier 1 networks without paying any fees for the exchange of traffic in either direction. In contrast, some Tier 2 networks and all Tier 3 networks must pay to transmit traffic on other networks.

An autonomous system (AS) is a collection of connected Internet Protocol (IP) routing prefixes under the control of one or more network operators on behalf of a single administrative entity or domain, that presents a common and clearly defined routing policy to the Internet. Each AS is assigned an autonomous system number (ASN), for use in Border Gateway Protocol (BGP) routing. Autonomous System Numbers are assigned to Local Internet Registries (LIRs) and end user organizations by their respective Regional Internet Registries (RIRs), which in turn receive blocks of ASNs for reassignment from the Internet Assigned Numbers Authority (IANA). The IANA also maintains a registry of ASNs which are reserved for private use.

Internet exchange points are common grounds of IP networking, allowing participant Internet service providers (ISPs) to exchange data destined for their respective networks. IXPs are generally located at places with preexisting connections to multiple distinct networks, i.e., datacenters, and operate physical infrastructure (switches) to connect their participants. Organizationally, most IXPs are each independent not-for-profit associations of their constituent participating networks. The primary alternative to IXPs is private peering, where ISPs directly connect their networks to each other.

LyonIX is the Internet eXchange point (IXP) of Lyon. LyonIX is managed by Rezopole, the non-profit organization supported by the Métropole de Lyon and the Auvergne – Rhône-Alpes region.

Level 3 Communications was an American multinational telecommunications and Internet service provider company headquartered in Broomfield, Colorado. It ultimately became a part of CenturyLink, where Level 3 President and CEO Jeff Storey was installed as Chief Operating Officer, becoming CEO of CenturyLink one year later in a prearranged succession plan.

Comcast Cable Communications, LLC, doing business as Xfinity, is an American telecommunications company and division of Comcast Corporation used to market consumer cable television, internet, telephone, and wireless services provided by the company. The brand was first introduced in 2010; prior to that, these services were marketed primarily under the Comcast name.

Internet transit is the service of allowing network traffic to cross or "transit" a computer network, usually used to connect a smaller Internet service provider (ISP) to the larger Internet. Technically, it consists of two bundled services: 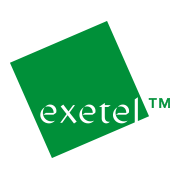 Exetel is an Australian ISP which provides ADSL, web hosting, VoIP, and other internet services to customers across Australia. Exetel's headquarters are in offices in Sydney, and its switching centres are distributed in capital city secure data centre facilities around mainland Australia.

Average Per-Bit Delivery Cost, or APBDC, is the cost accounting method by which Internet Service Providers (ISPs) calculate their cost of goods sold.

PacketExchange is a British multinational network services provider based in London. Founded in 2002 by Jason Velody and Kieron O'Brien who were supported by Nigel Titley, Giles Heron, and Katie Snowball as the founder team, its network connected 45 points of presence across Europe, Asia and the United States over a private backbone consisting primarily of multiple 10 Gigabit Ethernet links over dedicated wavelengths on a fiber-optic mesh.

IP exchange or (IPX) is a telecommunications interconnection model for the exchange of IP based traffic between customers of separate mobile and fixed operators as well as other types of service provider, via IP based Network-to-Network Interface. IPX is developed by the GSM Association.

Hurricane Electric is a global Internet service provider offering internet transit, tools, and network applications, as well as data center colocation and hosting services at 2 locations in Fremont, California, where the company is based.

Net bias is the counter-principle to net neutrality, which indicates differentiation or discrimination of price and the quality of content or applications on the Internet by ISPs. Similar terms include data discrimination, digital redlining, and network management.