Tontowi Ahmad (born 18 July 1987) is a retired Indonesian badminton player. He plays for PB. Djarum, a badminton club in Kudus, Central Java and joined the club in 2005. Tontowi Ahmad rose to prominence in the world badminton in 2010 when he paired with the established mixed doubles star Liliyana Natsir. With Natsir he won the 2016 Olympic gold medal in the mixed doubles category. [2]

Ahmad made his debut at the Olympic Games in 2012 London. He competed in the mixed doubles event with partner Liliyana Natsir and finished fourth.

Ahmad made his second appearances at the Olympic Games in 2016 Rio. Paired with Liliyana Natsir, the duo won the gold medal at the end after beating Chan Peng Soon and Goh Liu Ying of Malaysia. Ahmad and Natsir won all of their matches in straight sets, including against the current no. 1-ranked Zhang Nan and Zhao Yunlei.

The BWF Superseries, which was launched on 14 December 2006 and implemented in 2007, [5] is a series of elite badminton tournaments, sanctioned by the Badminton World Federation (BWF). BWF Superseries levels are Superseries and Superseries Premier. A season of Superseries consists of twelve tournaments around the world that have been introduced since 2011. [6] Successful players are invited to the Superseries Finals, which are held at the end of each year.

Robert Bogumił Mateusiak is a male badminton player from Poland. 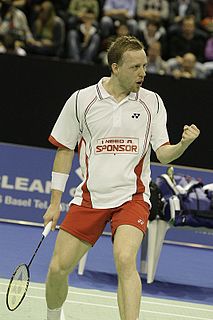 Thomas Laybourn is a retired badminton player from Denmark. He is a World Champions, two times European Champions and was ranked as world number 1 in the mixed doubles in January 2011. 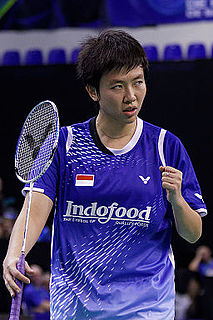 Liliyana Natsir is an Indonesian former badminton player who specialized in doubles. With one gold and silver from the Olympic Games, and four gold medals at the BWF World Championships, she is regarded as one of the greatest mixed doubles players of all time. Natsir was the second Indonesian woman Olympic gold medalist, after Susi Susanti won gold in 1992. She gained huge success by partnering with two different players. Her last partner was Tontowi Ahmad after being separated from her previous partner, Nova Widianto. She also won three titles in a row from 2012–2014 at All England Badminton Championships, one of the most prestigious and oldest tournaments in the sport. Her tactical awareness, game vision, and dominance at the front court are considered among the best in the tour. In 2016, she and Tontowi Ahmad became the first Indonesian mixed doubles pair to win a gold medal at the Olympic Games after beating Chan Peng Soon and Goh Liu Ying of Malaysia. As of 2019, she holds the highest number of BWF World Championship titles for mixed doubles.

Kunchala Voravichitchaikul is an internationally elite badminton player from Thailand. She competed at the 2006, 2010 and 2014 Asian Games. 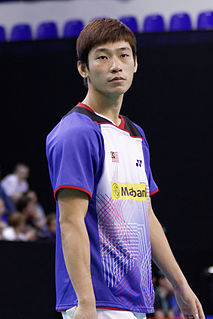 Chan Peng Soon is a Malaysian professional badminton player specialised in the mixed doubles event. He is best known for his partnership with Goh Liu Ying where they have been consistently ranked among the top 10 mixed doubles pair in the world. Chan and Goh reached their career high ranking of world No. 3 in 2012 and won the silver medal at the 2016 Rio Olympics.

Goh Liu Ying is a Malaysian professional badminton player. She has been consistently ranked among the top 10 mixed doubles player in the world with her partner, Chan Peng Soon. Together, they were ranked as high as world No. 3. They won the silver medal at the 2016 Summer Olympics. 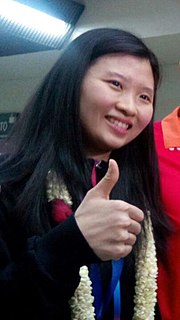 Debby Susanto is a former Indonesian badminton player who specializes in doubles, especially mixed doubles. She joined PB Djarum, a badminton club in Kudus, Central Java from 2006 until her retirement. Susanto known as Muhammad Rijal's longtime partner in the mixed doubles. The partnership ended in the end of the 2013 shortly after they won gold medal in 2013 Southeast Asian Games in Myanmar due to Rijal's resignation from national team. 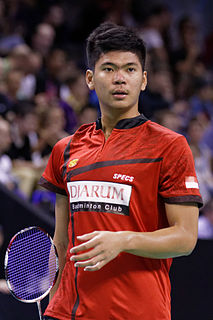 Praveen Jordan is an Indonesian badminton player who specialises in doubles. He is the reigning and two-time All England Open champion in mixed doubles, winning in 2016 with Debby Susanto and in 2020 with Melati Daeva Oktavianti. He has played for the badminton club PB Djarum since 2008.

Ronald Alexander is an Indonesian badminton player specializes in doubles. He is joined the Jaya Raya Jakarta badminton club in 2008, and moved to Jaya Raya Suryanaga Surabaya in 2011.

Melati Daeva Oktavianti is an Indonesian badminton player. She is a doubles specialist. She was the 2012 World Junior mixed doubles champion partnered with Edi Subaktiar. She is from PB. Djarum, a badminton club in Kudus, Central Java, having joined the club in 2008.

The 2015 Hong Kong Open Super Series was the twelfth Superseries tournament of the 2015 BWF Super Series. The tournament was contested in Kowloon, Hong Kong from November 17–22, 2015 with a total purse of $350,000. A qualification will occur to fill four places in all five disciplines of the main draws.

The 2016 Malaysia Super Series Premier was the third super series tournament of the 2016 BWF Super Series. The tournament took place in Shah Alam, Malaysia from April 5–April 10, 2016 and had a total purse of $550,000.