Triodos Bank N.V. is an ethical bank based in the Netherlands with branches in Belgium, Germany, United Kingdom and Spain. It was founded in 1980. Triodos Bank finances companies which it believes add cultural value and benefit to both people and the environment. That includes companies in the fields of solar energy, organic farming or culture. As of 2021, Triodos Bank has over 750,000 customers worldwide. [1]

The name Triodos is derived from the Greek "τρὶ ὁδος - tri hodos," meaning "three roads" (people, planet, profit). The bank was initially founded as an anthroposophical initiative with a mission to realise and promote quality of life in the broadest sense, not just here and now but over the long-term and from a global perspective. [2] [3]

In 1980 Triodos launched the first "green fund", a fund for environmentally friendly projects, on the Amsterdam Stock Exchange. [4] Friends of the Earth in the Netherlands claims that transferring 10,000 euros in savings from a "climate laggard" such as ABN Amro to Triodos will effectively result in a carbon dioxide emissions saving equivalent to what would be achieved by not driving a car for six months. [5] The bank compensates 100% of its own CO2 emissions. [6]

Triodos took over the British ethical bank Mercury Provident in 1994. [7]

The bank operations and customer support are mainly offered digitally, but adapt to local business norms. In Spain, for example, several physical offices have been opened in major towns.

Triodos Bank received the Sustainable Bank of the Year 2009 award from the Financial Times and the International Finance Corporation (IFC), an organization of the World Bank, having been selected from 165 institutes from 42 countries. [9]

The Triodos Bank refers to their work as the anthroposophical principle of social threefolding. [10] The bank transfers its customers' deposits exclusively to the real economy, [11] thereby financing companies, organizations and projects which it believes contribute to ecological, social or cultural change. [11] In accordance with this philosophy, Triodos Bank in Germany purchases electricity from the green energy provider Naturstrom AG. [12]

Triodos "publish details of every organisation [they] lend to, and invest in". [13] The bank displays its annual report online for loans and funds entrusted, which highlights key Triodos Bank facts and figures. [14]

Savers can open conventional savings accounts, as well as ethical funds and venture capital. Triodos also offer conventional personal current accounts and business banking services. Triodos also has an active international department, supporting microfinance initiatives across the developing world. Triodos is the only commercial bank in the UK to provide an annual list of all the loans the bank has made. [15]

Triodos is unusual in that it only lends to businesses and charities judged to be of social or ecological benefit. [16] [17] [18] [19] This "positive screening" extends its policies beyond those of ethical banks which solely avoid investing in companies judged to be doing harm ("negative screening"). [20] [21] The bank uses money deposited by close to 100,000 savers and lends it to hundreds of organisations, such as fair trade initiatives, organic farms, cultural and arts initiatives, renewable energy projects, and social enterprises.

"[Triodos] does not lend to organisations, businesses and projects that are directly involved for more than 5% of its activities in non-sustainable products and services or non-sustainable working processes. Triodos Bank will however, to the best of its knowledge, exclude all organisations, businesses and activities that produce or distribute nuclear energy, weapons, fur, pornography and environmentally hazardous substances" [22] [18]

Triodos is owned through depositary receipts by private investors and a small number of institutional investors. At the end of 2021 the bank had 43,521 depository receipt holders. [23]

Triodos Bank's shares are owned by the Stichting Administratiekantoor Aandelen Triodos Bank (SAAT), which subsequently issues depositary receipts to individuals and institutions, which entitle them to payment of a dividend, but to which only a limited voting right is attached. Depositary receipts for shares of the bank are not traded on any stock exchange. Holders are not allowed to own more than 10% of the shares and the maximum number of votes per holder in the general meeting of depositary receipt holders is limited to 1,000. This construction was chosen to prevent hostile takeovers.

Triodos has managed trading in certificates itself since its inception. Mainly as a result of the COVID-19 epidemic, an imbalance arose between buyers and sellers of certificates, whereby there were more sellers than buyers. The bank therefore temporarily suspended trading on 18 March 2020. Trading resumed on 13 October 2020, with a cap of €5,000 for sales, which was later reduced to just €1,000. Trading was halted again on 5 January 2021. This led to a reaction from certificate holders. They joined forces in November 2021 in the 'Triodom' platform, from which the Triodos Bank Depositary Receipt Holders Foundation was established in March 2022, representing concerned customers with a combined depository capacity of €120 million. On 10 October 2022 the foundation filed a petition with the Enterprise Chamber of the Amsterdam Court of Appeal asking it to investigate, [24] which the bank regrets.

On 21 December 2021, Triodos decided to start trading the certificates on a multilateral trading facility (MTF), a trading platform that is only accessible to registered participants and can therefore protect the autonomy and mission of the bank. [25] The price of the certificates will then be determined by supply and demand rather than, as previously, on the basis of the net asset value of the bank. With a view to tax reporting obligations, the bank has applied an administrative discount of 30% to the value of the certificates from 31 December 2021. The last traded price of certificates was €84 on 5 January 2021 but for tax purposes they are valued at only €59. Because trading is not expected to restart until the 2nd quarter of 2023, [26] a restrictive certificate buyback programme was planned in 2021 for certificate holders with an urgent need to sell their shares. However in August 2022, the bank announced that this plan would be withdrawn and proposed instead to pay an extraordinary dividend of €1.01 per depository receipt (before withholding tax).

An American depositary receipt is a negotiable security that represents securities of a foreign company and allows that company's shares to trade in the U.S. financial markets.

The Depository Trust & Clearing Corporation (DTCC) is an American post-trade financial services company providing clearing and settlement services to the financial markets. It performs the exchange of securities on behalf of buyers and sellers and functions as a central securities depository by providing central custody of securities.

Clearstream is a financial services company that specializes in the settlement of securities transactions and is owned by Deutsche Börse AG. It provides settlement and custody as well as other related services for securities across all asset classes. It is one of two European International central securities depositories.

A depository bank or depositary bank is a specialist financial entity which, depending on jurisdiction, facilitates investment in securities markets.

Close Brothers Group plc is a UK merchant banking group, providing lending, deposit taking, wealth management and securities trading. The company is listed on the London Stock Exchange and is a constituent of the FTSE 250 Index.

A global depository receipt is a general name for a depositary receipt where a certificate issued by a depository bank, which purchases shares of foreign companies, creates a security on a local exchange backed by those shares. They are the global equivalent of the original American depositary receipts (ADR) on which they are based. GDRs represent ownership of an underlying number of shares of a foreign company and are commonly used to invest in companies from developing or emerging markets by investors in developed markets.

A Demat account is a necessary account to hold financial securities in a digital form and to trade shares in the share market. In India, Demat accounts are maintained by two depository organizations, the National Securities Depository Limited and the Central Depository Services Limited. A depository participant, such as a bank, acts as an intermediary between the investor and the depository. In India, a Depository Participant (DP) is described as an Agent of the depository. They are the intermediaries between the depository and the investors. The relationship between the DPs and the depository is governed by an agreement made between the two under the Depositories Act. The Demat account number is quoted for all transactions to enable electronic settlements of trades to take place. Access to the dematerialized account requires an internet password and a transaction password. Transfers or purchases of securities can then be initiated. A security is a tradable financial asset. The term commonly refers to any form of a financial instrument, but its legal definition varies by jurisdiction. Purchases and sales of securities on the dematerialized account are automatically made once transactions are confirmed and completed.

An ethical bank, also known as a social, alternative, civic, or sustainable bank, is a bank concerned with the social and environmental impacts of its investments and loans. The ethical banking movement includes: ethical investment, impact investment, socially responsible investment, corporate social responsibility, and is also related to such movements as the fair trade movement, ethical consumerism, and social enterprise.

HDFC Bank Limited is an Indian banking and financial services company headquartered in Mumbai. It is India's largest private sector bank by assets and world's 10th largest bank by market capitalisation as of April 2021. It is the third largest company by market capitalisation of $122.50 billion on the Indian stock exchanges. It is also the fifteenth largest employer in India with nearly 150,000 employees. 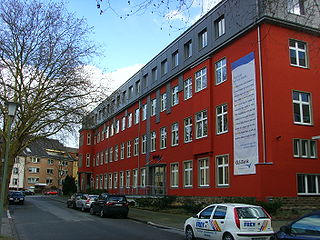 GLS Bank is a German ethical bank that was founded in 1974 as an anthroposophical initiative by Wilhelm Ernst Barkhoff and Gisela Reuther. It was the first bank in Germany that operated with an ethical philosophy. According to GLS Bank, its focus is on cultural, social and ecological initiatives, initiated by people, and not anonymous interests seeking capital or maximum profit. The name stands for Gemeinschaftsbank für Leihen und Schenken which translates as Community bank for loaning and giving.

Bank of Georgia Group PLC is a UK incorporated holding company. The group comprises a retail banking and payments business, and a corporate banking and investment banking business, both operating in Georgia. The company is listed on the London Stock Exchange and is a constituent of the FTSE 250 Index.

Social enterprise lending is a form of social finance which refers to the practice of offering loans and other financing vehicles below current market rates to social enterprises and other organisations pursuing social goals. This is often referred to as "patient lending," or financing with "soft" terms. Patient lending recognises that projects with social outcomes often reach profitability later than commercial projects. Softening the terms of a loan means that a social lender may offer provisions such as longer loan terms, lower interest rates and repayment "holidays" where capital and interest repayments are not due until the project is profitable. Social lenders might also offer small grants as part of an investment package.

New Resource Bank is a San Francisco, California-based bank which is a part of Amalgamated Bank.

Mercury Provident was the first British ethical bank, noted for its "Target Accounts" which allowed depositors to select a rate of interest and a field to invest in. It was founded in 1974 and merged with Triodos Bank in 1994.