Trongate is one of the oldest streets in the city of Glasgow, Scotland. Trongate begins at Glasgow Cross, where the steeple of the old Glasgow Tolbooth is situated, being the original centre of medieval Glasgow, and goes westward changing its name to Argyle Street at Glassford Street.

Previously known as St Thenew's Gait (the way to the supposed site of St Thenew`s burial) it was around the start of the 1500s that the name Trongate first began to be used. The name comes by virtue of a weighbeam erected in the mid-16th century, used for all goods requiring to be weighed for duty reasons, including from early shipping on the Clyde. Tron is a Scots word of Norman origin for weighing scales. [1]

The Trongate was one of the areas which was affected by a large fire on 17 June 1652 which destroyed a third of the town and left around 1,000 families homeless. The fire also affected the areas of Saltmarket and Gallowgate. [2]

The Tron church was founded as the Collegiate Church of Our Lady and St Anne in 1525 by James Houston. It became a Protestant church after the Reformation and the tower was added in the late 16th century. The steeple was added in 1628. Most of the building was destroyed by a fire in 1793, only the tower surviving. [3] The current church was built in 1794, separately from the tower. [4] It was substantially redeveloped in the 1980s as the Tron Theatre. [5] [6] [7]

Trongate was used as a route for the trams of Glasgow Corporation Tramways until this system was abandoned in 1962. The tramlines were subsequently removed. [8] Glasgow Cross railway station was situated at the eastern end of the street between 1895 and 1964 (the tracks – part of the extant Argyle Line – and parts of the station are still present below ground). The Trongate remains a major bus corridor for services travelling to and from the east and south-eastern parts of the city (largely along the old tram routes), which use the one-way systems on the Gallowgate and London Road but merge at Glasgow Cross.

Bridgeton is a district to the east of Glasgow city centre. Historically part of Lanarkshire, it is bounded by Glasgow Green to the west, Dalmarnock to the east and south, Calton to the north-west at Abercromby Street/London Road and Gallowgate to the north-east.

The St George's Tron Church, in Glasgow, Scotland, is a Church of Scotland church in the city centre, located in Nelson Mandela Place, previously known as St George's Place, fronting Buchanan Street at West George Street, along from Queen Street Station. It should not be confused with the 17th-century Tron Church, which lies to the south-west on Trongate and was redeveloped in the 1980s as the Tron Theatre. Located right on the busiest shopping street in Scotland, the building is a significant presence, and the oldest in the area. It stands as a terminating vista for West George Street.

The Merchant City is the area close to George Square and Glasgow City Chambers, and reaching Glasgow Cross, some parts dating from the medieval period, in the centre of Glasgow, Scotland. It contains offices, flats, retail shops, restaurants, and bars. It is also home to the former Royal Exchange at Queen Street, GoMA, the Gallery of Modern Art, City Halls & Old Fruitmarket, Merchant Square, and the Scottish Youth Theatre. It hosts many annual festivals.

The Glasgow Museum of Transport in Glasgow, Scotland was established in 1964 and initially located at a former tram depot in Pollokshields. In 1988 the museum was relocated to the city's Kelvin Hall, then moved to its current location in the Riverside Museum building at Glasgow Harbour in 2011. 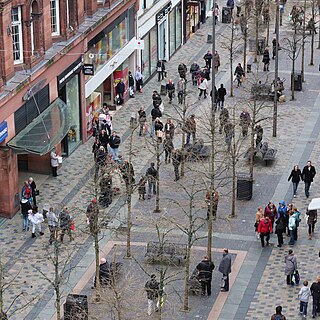 Sauchiehall Street is one of the main shopping streets in the city centre of Glasgow, Scotland, along with Buchanan Street and Argyle Street.

The A730 road in Scotland runs between the centre of Glasgow and the south-eastern edge of the city's urban area at Cathkin.

The Tron Theatre is located at the corner of Trongate and Chisholm Street, in what was formerly the Collegiate Church of Our Lady and St Anne in the Merchant City area of Glasgow, Scotland. The Tron Steeple still stands adjacent to the theatre.

Glasgow Cross is at the hub of the ancient royal burgh and now city of Glasgow, Scotland, close to its first crossing over the River Clyde. As a major junction in the city centre, its five streets run: north up the High Street to Glasgow Cathedral, Cathedral Square and the Royal Infirmary; east along Gallowgate and London Road, close to St Andrew's Square; south on the Saltmarket to Glasgow Green and the High Court; and west along Trongate continuing as Argyle Street towards St Enoch Square and Buchanan Street.

The Collegiate Church of the Blessed Virgin Mary and St Anne, Glasgow, was founded in the middle of the sixteenth century by James Houstoun, Subdean of Glasgow and Rector of the University of Glasgow from 1534–41. The church was located on the south side of Trongate. Two copies of its Latin constitution, dating from 1549, have survived in the city archives. These provide detailed information about the structure of the college and its funding. James Houstoun's original provision was for a Provost, eight canons or prebends, and three choristers, but later benefactions extended this. The prebends were supported by property scattered across the city, and in Dalry, Maybole and Rutherglen. 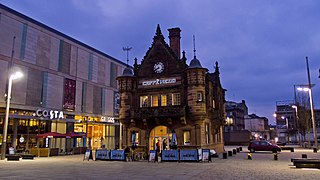 St. Enoch Square is a large public square in Glasgow, Scotland, situated south of the junction of Buchanan Street and Argyle Street, the two of the city's busiest shopping streets.

Glasgow Corporation Tramways were formerly one of the largest urban tramway systems in Europe. Over 1000 municipally-owned trams served the city of Glasgow, Scotland with over 100 route miles by 1922. The system closed in 1962 and was the last city tramway in Great Britain. 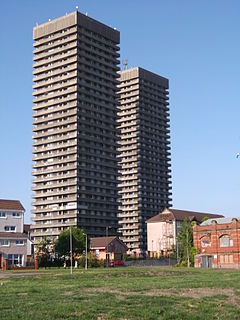 The Bluevale and Whitevale Towers were twin tower block flats situated in the Camlachie district within the East End of Glasgow, Scotland. Officially named 109 Bluevale Street and 51 Whitevale Street, and often nicknamed the Gallowgate Twins or the Camlachie Twin Towers, the two towers were for a time the tallest buildings in Scotland.

Argyle Street is a major thoroughfare in the city centre of Glasgow, Scotland.

The A749 road in Scotland connects East Kilbride with Glasgow city centre via Rutherglen and Bridgeton.

Glasgow city centre is the central business district of Glasgow, Scotland. Is bounded by Saltmarket, High Street and Castle Street to the east, The River Clyde to the south and the M8 motorway to its west and north. Glasgow City Centre is composed of the areas of Garnethill, Blythswood Hill and Merchant City as well as parts of Cowcaddens, Townhead, Anderston and Calton.

St Andrew's Cross, also known as Eglinton Toll, is a road junction in the south side of the city of Glasgow, Scotland. 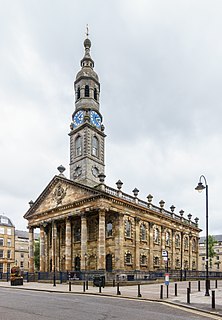 St Andrew's Square is a public square in the city of Glasgow, Scotland and lies to the south east corner of Glasgow Cross, close to Glasgow Green. The square is noted for its immense 18th-century classical church, St Andrew's in the Square, from which the square takes its name. The church was completed in 1758, to the designs of architect Allan Dreghorn and master mason Mungo Naismith and is among the finest of its type anywhere in Britain. The interior has lavish 18th century rococo plasterwork. The building is Category A listed. It is one of six squares in the city centre. 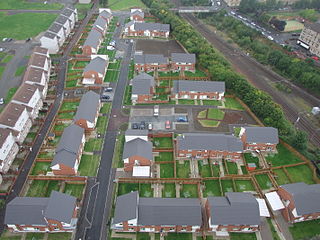 Gallowgate is a neighbourhood of the city of Glasgow, Scotland. It takes its name from the major thoroughfare through the territory, which is part of the A89 road. Administratively, it is part of the Calton ward of the Glasgow City Council area.

Sandyford is an area of Glasgow, Scotland. It is north of the River Clyde and forms part of the western periphery of the city centre. Formerly the name of a ward under Glasgow Town Council in the first part of the 20th century, it is within a continuous area of fairly dense urban development bordering several other neighbourhoods whose mutual boundaries have blurred over time, and is possibly less well known than all of the places which adjoin it, particularly Anderston and Finnieston.