The Vermont Historical Society is a 501(c)(3) nonprofit that connects residents, scholars, educators, and students with Vermont's rich heritage and with one another. It strives to set a high standard for statewide work in Vermont history and provide leadership in Vermont history education by providing access to the Society's collections and programming.

"The Vermont Historical Society engages both Vermonters and "Vermonters at heart" in the exploration of our state's rich heritage. Our purpose is to reach a broad audience through our outstanding collections, statewide outreach, and dynamic programming. We believe that an understanding of the past changes lives and builds better communities."

Named after Howard and Alba Leahy, the Leahy Library opened to the public in July 2002 and is a valuable resource for individualized research. The library offers access to 50,000 catalogued books and serial titles, 1,500 linear feet of manuscripts, 30,000 photographs, 8,700 broadsides, more than 1,000 maps and an online public access catalogue. In addition, the library has the largest printed genealogical collection in the state.

Vermont Historical Society also operates the Vermont History Museum, which is located in Montpelier and housed in the Pavilion building next to the state capital. It boasts a collection of 20,000 artifacts including fine arts, crafts, household goods, clothing, agricultural tools, and industrial products from the pre-contact period to present.

The Vermont History Museum's award-winning permanent exhibit, "Freedom and Unity: One Ideal, Many Stories," allows visitors to walk through 350 years of Vermont history (1600s–present). Opened in March 2004, the multimedia exhibit fills 5,000 square feet (460 m2) of the Pavilion building in Montpelier. Visitors move through a visual timeline and experience such recreations as a full-sized Abenaki wigwam, the Catamount Tavern where Ethan Allen's Green Mountain Boys gathered, a railroad station complete with a working telegraph and a WWII living room furnished with period music and magazines.

This exhibit is also presented online.

The Vermont History Center is the home of the Vermont Heritage Galleries, located in the beautiful historic Spaulding school building at 60 Washington Street in Barre, Vermont. The three exhibit galleries offer rotating exhibits on various aspects of Vermont history. The center also houses the Society's library and museum collections, administration offices, and a public meeting space.

From 2000 to 2016 VHS presented the Vermont History Expo, a weekend-long celebration of the state's rich heritage in scenic Tunbridge, Vermont. Each Expo featured a variety of themed attractions and events, including exhibits from 150+ local historical societies, museums, and heritage organizations; music; family activities; food; presentations; performances; and more.

Vermont Historical Society's education department provides a wide range of programming for families, teachers, and students. Students and teachers can experience history with free field trips to the museum, history lending kits, and Vermont History Day, which allows students to delve thoroughly into a historical topic.

The Vermont Women's History Project is a program that highlights the role women have played in shaping Vermont's history. By providing resources and programs, Vermont Historical Society makes this important information available to students, researchers, and anyone interested in Vermont women and their accomplishments.

Since 1943, the Vermont Historical Society has provided outreach and support to Vermont's local history community through the League of Local Historical Societies and Museums. The League partners with all 192 of the state's small public libraries and 200 local museums and heritage organizations to provide free consultation on collections care and using technology to enhance rural access to historical information. This technical assistance includes collections care, e-newsletters, achievement awards program annual conference, and a publication listing all of Vermont's local historical societies. 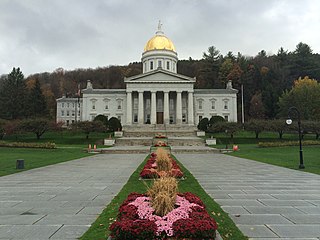 Montpelier is the capital city of the U.S. state of Vermont and the seat of Washington County. As the site of Vermont's state government, it is the least populous state capital in the United States. The population was 7,855 as of the 2010 census. However, the daytime population grows to about 21,000, due to the large number of jobs within city limits. The Vermont College of Fine Arts and New England Culinary Institute are located in the municipality. It was named after Montpellier, a city in the south of France.

Vermont Technical College is a public technical college in Vermont with its main campuses in Randolph Center, Williston, and Norwich. In addition, there are regional campuses in Brattleboro and Bennington, and nursing campuses in six locations throughout the state.

The Great Seal of the State of Vermont is the official seal of the U.S. state of Vermont, used to emboss and authenticate official documents. It was designed by Ira Allen, brother of Ethan Allen and one of the state's founders.

History Park at Kelley Park in San Jose, California, USA is designed as an indoor/outdoor museum, arranged to appear as a small US town might have in the early 1900s (decade). Since its inauguration in 1971, 32 historic buildings and other landmarks have either been moved from their original San Jose locations or are represented by replicas. 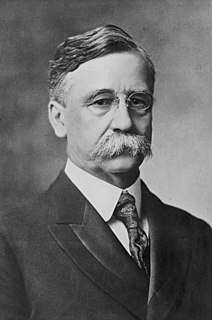 During the American Civil War, the State of Vermont continued the military tradition started by the Green Mountain Boys of American Revolutionary War fame, contributing a significant portion of its eligible men to the war effort. 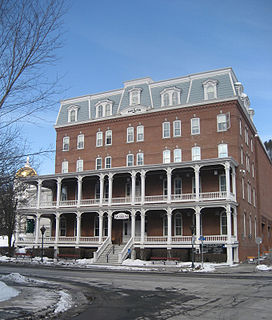 The Pavilion is the principal workplace of the Governor of Vermont, located at 109 State Street in Montpelier, capital of the U.S. state of Vermont. The building is built in the French Second Empire style, and houses the working offices, reception room, press briefing room, and living apartments of Vermont's governor. The term "The Fifth Floor" is sometimes used as a metonym for a governor's administration, or the Vermont governorship, which refers to the location of the governor's offices on the fifth floor of the Pavilion. The offices of two other elected statewide officials, the Vermont Attorney General and the Vermont State Treasurer, are housed in the Pavilion along with the Agency of Administration and the Vermont Historical Society and its museum.

Spaulding High School and the Central Vermont Career Center has a long history in the city of Barre. Established in 1890, the school is located at 155 Ayers Street with Brenda Waterhouse as principal of the high school and Penny Chamberlain director of the Career Center.

The Missouri Historical Society was founded in St. Louis on August 11, 1866. Founding members created the historical society "for the purpose of saving from oblivion the early history of the city and state".

The Kansas Historical Society is the official state historical society of Kansas.

The Chemung County Historical Society is headquartered in the historic Chemung Canal Bank Building in Elmira, New York. It is dedicated to the collection, preservation, and presentation of the history of the Chemung River Valley region. The society was founded in 1923 and first chartered by New York State in 1947. It is accredited by the American Alliance of Museums, and currently operates two cultural repositories, the Chemung Valley History Museum and the Booth Library, both as non-profit educational institutions.

The New Hampshire Historical Society is an independent nonprofit in Concord that saves, preserves, and shares New Hampshire history.

The former Spaulding School Building is a historic structure that has overlooked the city of Barre, Vermont, United States, since 1891. It now houses the Vermont History Center, the home of the Vermont Historical Society.

John Spaulding was a Montpelier, Vermont businessman who served as Vermont State Treasurer.

Founded in 1916, the Columbia County Historical Society and CCHS Museum & Library collects, preserves, interprets, and presents the history, heritage, and culture of Columbia County, New York, and serves residents of all eighteen Columbia County towns and the city of Hudson.

Horace W. Bailey was a Vermont politician and government official. A Republican, he was most notable for his service as a member of the Vermont Senate from Orange County (1894-1896), a member of the Vermont House of Representatives from Newbury (1902-1904), and the United States Marshal for the District of Vermont from 1903 until his death.

The Vermont Department of Libraries Is the official state library agency of Vermont located in Barre, Vermont. It is a department under Vermont's Agency of Administration.