Year 1447 ( MCDXLVII ) was a common year starting on Sunday (link will display the full calendar) of the Julian calendar.

Year 1431 (MCDXXXI) was a common year starting on Monday of the Julian calendar.

Year 1442 (MCDXLII) was a common year starting on Monday of the Julian calendar.

Year 1443 (MCDXLIII) was a common year starting on Tuesday of the Julian calendar.

Year 1445 (MCDXLV) was a common year starting on Friday of the Julian calendar.

Year 1448 (MCDXLVIII) was a leap year starting on Monday of the Julian calendar.

Mircea the Elder was the Voivode of Wallachia from 1386 until his death in 1418. He was the son of Radu I of Wallachia and brother of Dan I of Wallachia, after whose death he inherited the throne.

Radu III of Wallachia, commonly called Radu the Handsome or Radu the Fair, was the younger brother of Vlad III and Prince of the principality of Wallachia. They were both sons of Vlad II Dracul and his wife, Princess Cneajna of Moldavia. In addition to Vlad III, Radu also had two older siblings, Mircea II and Vlad Călugărul, both of whom would also briefly rule Wallachia.

Vlad II, also known as Vlad Dracul or Vlad the Dragon, was Voivode of Wallachia from 1436 to 1442, and again from 1443 to 1447. He is internationally known as the father of Vlad the Impaler, or Dracula. Born an illegitimate son of Mircea I of Wallachia, he spent his youth at the court of Sigismund of Luxembourg, who made him a member of the Order of the Dragon in 1431. Sigismund also recognized him as the lawful voivode of Wallachia, allowing him to settle in nearby Transylvania. Vlad could not assert his claim during the life of his half-brother, Alexander I Aldea, who acknowledged the suzerainty of the Ottoman Sultan, Murad II.

Vlad III, commonly known as Vlad the Impaler or Vlad Dracula, was Voivode of Wallachia three times between 1448 and his death in 1476/77. He is often considered one of the most important rulers in Wallachian history and a national hero of Romania.

Dan II was a voivode of the principality of Wallachia, ruling an extraordinary five times, and succeeded four times by Radu II Chelul, his rival for the throne. Of those five periods on the throne of Wallachia, four were within a period of only seven years.

Alexander I Aldea was a Voivode of Wallachia (1431–1436) from the House of Basarab, son of Mircea the Elder. He came to rule Wallachia during an extremely turbulent time when rule of the country changed hands by violence eighteen times during the 15th century. Alexander I took the throne by ousting Dan II of Wallachia, father to Basarab II. Dan II was on his 5th rule of Wallachia, having gone back and forth with Radu II several times over the course of seven years during the 1420s. He was strong enough to hold the throne for what was then a considerable time, a stretch of five years. However, in the winter of 1436 he died, most probably from illness, as there are no rumours to the contrary. Upon his death, his half-brother Vlad II Dracul assumed the throne and would hold it off and on until he was killed in 1447.

Mircea II (1428–1447) was a onetime Voivode of the principality of Wallachia, in the year 1442. He was the oldest son of Vlad II Dracul and brother of Vlad Țepeș and Radu the Handsome. He was the grandson of his namesake Mircea cel Bătrân. 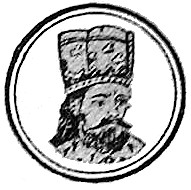 The House of Drăculești were one of two major rival lines of Wallachian voivodes of the House of Basarab, the other being the House of Dănești. These lines were in constant contest for the throne from the late fourteenth to the early sixteenth centuries. Descendants of the line of Drăculești would eventually come to dominate the principality until its common rule with Transylvania and Moldavia by Mihai Viteazul in 1600.

Vlad V cel Tânăr was the Prince of Wallachia (1510–1512). He took the throne from Mircea III Dracul on 8 April 1510 with the help of the Ottomans and with the support of the Craiovești family. In exchange, the prince vowed protection to Mehmet and his family and Parvu Craiovescu, a member of the Craiovești family, became the head of the Divan of Wallachia. Parvu was then followed by Danciu and in 1511, by Bogdan, the Prince's brother-in-law.