A brigantine is a two-masted sailing vessel with a fully square-rigged foremast and at least two sails on the main mast: a square topsail and a gaff sail mainsail (behind the mast). [1] The main mast is the second and taller of the two masts.

Older usages are looser; in addition to the rigorous definition above (attested from 1695), the Oxford English Dictionary has about 1525 definitions of "a small vessel equipped both for sailing and rowing, swifter and more easily manœuvred than larger ships" and "(loosely) various kinds of foreign sailing and rowing vessels, as the galleon, galliot, etc." [2]

Modern American definitions include vessels without the square sails on the main mast.

In the Mediterranean Basin during the 13th century, a brigantine referred to a sail- and oar-driven war vessel. [3] It was lateen rigged on two masts and had between eight and 12 oars on each side. Its speed, maneuverability, and ease of handling made it a favourite of Mediterranean pirates. Its name is derived from the Italian word brigantino , which in turn is derived from brigante [4] "brigand". Other than in names, this vessel has no relation to the later brigantines developed in Northern Europe.[ citation needed ]

By the 17th century, the term was adopted by Atlantic maritime nations. The vessel had no lateen sails, but was instead square-rigged on the foremast and had a gaff-rigged mainsail with square rig above it on the mainmast. [5] The mainmast of a brigantine is the aft one.

By the first half of the 18th century, the word had evolved to refer not to a kind of vessel, but rather to a particular type of rigging: two-masted, with her foremast fully square-rigged and her mainmast rigged with both a fore-and-aft mainsail (a gaff sail) and square topsails and possibly topgallant sails. [1]

The brigantine was the second-most popular rig for ships built in the British colonies in North America before 1775 [6] The most popular type of vessel was the sloop. The brigantine was swifter and more easily maneuvered than a sloop or schooner, hence was employed for piracy, espionage, and reconnoitering, and as an outlying attendant upon large ships for protecting a ship, or for supply or landing purposes in a fleet.

The brigantine could be of various sizes, ranging from 50 to 200 tons burden. [6] The brigantine was generally larger than a sloop or schooner, but smaller than a brig. [3]

The last sailing true brigantine in the world is the Eye of the Wind . [1]

The definition given above describes the international usage of the term brigantine. In modern American terminology, the term brigantine now usually means a vessel with the foremast square rigged and the mainmast fore-and-aft rigged, without any square sails. Historically, this rig used was called a schooner brig' or hermaphrodite brig. [7] In Europe, the distinction is typically still made. The training ship Zebu, which circumnavigated the Earth as part of Operation Raleigh, is an example of a schooner brig.

The word brig is an 18th-century shortening of the word brigantine, but came to mean a different type of rigging. The gaff-rigged mainsail on a brigantine distinguishes it from the brig, which is principally square-rigged on both masts. In addition to the different sail configuration, the brigantine's mainmast is made from two parts and equal to that of a schooner, a quite long mast and a top mast. The mainmast of a brig is made from three parts and equal to that of a fully rigged ship - a mast, topmast, and topgallant mast. With the advent of modern (metal) pole masts, this last difference typically no longer exists. 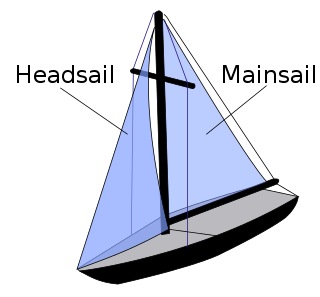 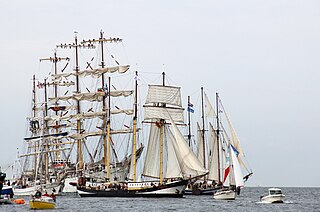 In sailing, a snow, snaw or snauw is a square-rigged vessel with two masts, complemented by a snow- or trysail-mast stepped immediately abaft (behind) the main mast.

A cutter is a sailing vessel which is distinguished from a sloop by having more than one foresails, and the main mast stepped slightly farther back. Cutters are most commonly private yachts but the term may also be used for some rowing or power boats, for example, the United States Coast Guard Cutter. 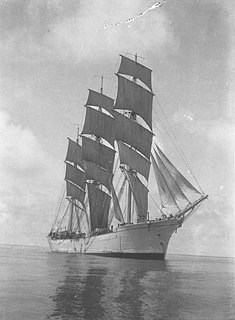 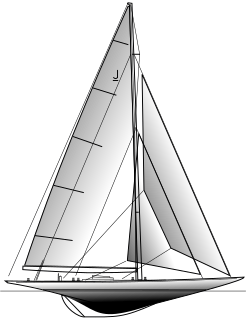 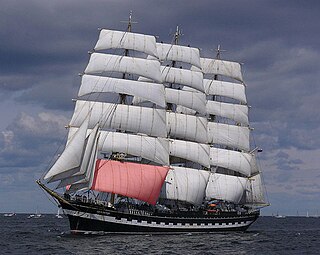 A foresail is one of a few different types of sail set on the foremost mast (foremast) of a sailing vessel: 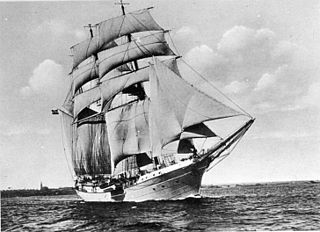 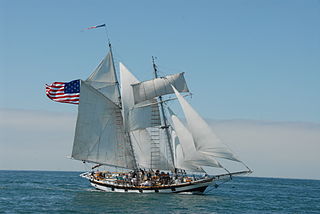 Amazing Grace is an 83' topsail schooner. Her home port is in San Juan, Puerto Rico. The ship serves as the platform for the non-profit Maritime Leadership and is also available for private charters and memorials at sea. Maritime Leadership provides traditional sail training adventures through sailings ranging from 3–48 hours.