The channel is designed for men and was launched in November 2011. [1]

The 2012 UEFA European Championship, commonly referred to as UEFA Euro 2012 or simply Euro 2012, was the 14th European Championship for men's national football teams organised by UEFA. The final tournament, held between 8 June and 1 July 2012, was co-hosted for the first time by Poland and Ukraine, and was won by Spain, who beat Italy 4–0 in the final at the Olympic Stadium, Kiev, Ukraine.

Serie A, also called Serie A TIM due to sponsorship by TIM, is a professional league competition for football clubs located at the top of the Italian football league system and the winner is awarded the Coppa Campioni d'Italia. It has been operating for over ninety years since the 1929–30 season. It had been organized by Lega Calcio until 2010, when the Lega Serie A was created for the 2010–11 season. Serie A is regarded as one of the best football leagues in the world and it is often depicted as the most tactical national league. Serie A was the world's second-strongest national league in 2014 according to IFFHS. Serie A is ranked third among European leagues according to UEFA's league coefficient, behind La Liga, Premier League, and ahead of Bundesliga and Ligue 1, which is based on the performance of Italian clubs in the Champions League and the Europa League during the last five years. Serie A led the UEFA ranking from 1986 to 1988 and from 1990 to 1999.

Aker Stadion, formerly known as Molde Stadion, is a football stadium located at Reknes in Molde, Norway, and is the home of Eliteserien club Molde. The stadium has a current capacity of 11,249 spectators.

Television was introduced in Finland in 1955. Color television started in 1969. Prior to 1986, Yle monopolized the Finnish television. All terrestrial analogue stations stopped broadcasting on 1 September 2007 after introducing digital television; cable providers were allowed to continue analog broadcasting in their networks until 1 March 2008.

The 2011-season is the 106th season of competitive football in Norway.

Below is the list of confirmed broadcasting right holders for UEFA Euro 2012. European Broadcasting Union and Sportfive acts as the agent who responsible for TV right sales in Europe and Asia-Pacific respectively. Eurosport has also secured the rights to broadcast the matches on tape delay in 58 European countries.

The 2012-season was the 107th season of competitive football in Norway.

The 2012 Tippeligaen was the 67th completed season of top division football in Norway. The competition began on 23 March 2012 and ended on 18 November 2012, with a summer break from 28 May to 30 June. Molde were the defending champions, while Hønefoss and Sandnes Ulf entered as the promoted teams from the 2011 1. divisjon.

The 2012 season was Molde's 5th consecutive year in Tippeligaen, and their 36th season in the top flight of Norwegian football. It was Ole Gunnar Solskjær's second season as the club's manager. Molde were defending champions in Tippeligaen and played through qualification for UEFA Champions League. Molde entered the Champions League in the second qualifying round, where they eliminated Ventspils before and facing Basel of Switzerland in the third qualifying round. They lost 1–2 on aggregate and where knocked out, dropping down into the Play off round of the UEFA Europa League. Molde successfully defended their title on 11 November 2012, when they beat Hønefoss 1–0, whilst their closest title challengers, Strømsgodset lost 2–1 away to Sandnes Ulf.

Univision Deportes Network is a Spanish language American sports channel. Owned by Univision Communications, it serves the Hispanic and Latino community in the United States as an extension of the company's sports division, Univision Deportes. The network's prime properties include major Latin American soccer events, including per-team coverage of Liga MX, the Spanish portion of the Major League Soccer package, the Copa América, and CONCACAF's Champions League and Gold Cup tourneys. Univision Deportes Network began broadcasting on April 7, 2012 and on DirecTV on March 17, 2013, along with Univision tlNovelas and FOROtv. 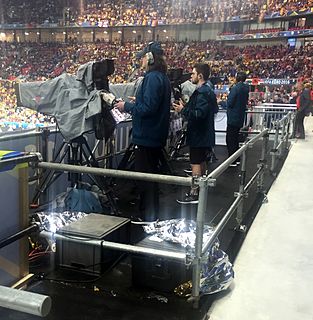 UEFA Euro 2016 is a football tournament scheduled to take place in June and July 2016 involving 24 men's national teams from nations affiliated to the Union of European Football Associations (UEFA). The tournament was broadcast via television and radio all over the world, with the rights divided between various nations and wider territories.

beIN Sports is a global network of sports channels owned and operated by beIN Media Group. Its Chairman is Nasser Al-Khelaifi, and its CEO is Yousef Al-Obaidly.

Caroline Graham Hansen is a Norwegian footballer who plays as a winger for Primera División club FC Barcelona and the Norway women's national football team. She spent the second part of the 2013 Damallsvenskan season in Sweden, playing for Tyresö FF. Hansen represented Norway at youth international level, and made her debut for the senior team in 2011. In 2013, she was a part of the Norwegian team that won silver at UEFA Women's Euro 2013.

Energy is a private Spanish television channel owned by Mediaset España Comunicación. Its programming is aimed towards a male audience. It began test broadcasts on 27 December 2011 before fully launching on 9 January 2012.