Gomphotheres are any members of the diverse, extinct taxonomic family Gomphotheriidae. Gomphotheres were elephant-like proboscideans, but not belonging to the family Elephantidae. They were widespread in North America during the Miocene and Pliocene epochs, 12–1.6 million years ago. Some lived in parts of Eurasia, Beringia, and in South America following the Great American Interchange. While most famous forms like Gomphotherium had long lower jaws with tusks, which is the ancestral condition for the group, after these forms became extinct the surviving gomphotheres had short jaws with either vestigal or no lower tusks (brevirostrine), looking very similar to modern elephants, an example of parallel evolution. Beginning after 5 million years ago, they were gradually replaced by mammoths and mastodons in most of North America, with the last two genera Cuvieronius persisting in Mexico and Notiomastodon having a wide range over most of South America until the end of the Pleistocene.

Gomphotheres differed from elephants in their tooth structure, particularly the chewing surfaces on the molar teeth. The earlier species had four tusks, and their retracted facial and nasal bones prompted paleontologists to believe that gomphotheres had elephant-like trunks. [2]

Both the genus Gomphotherium and family Gomphotheriidae were erected by the German zoologist Karl Hermann Konrad Burmeister (1807-1892) in 1837.

The term Gomphothere as historically used (sensu lato) is paraphyletic, containing all proboscideans more derived than mammutids but less derived than elephantids. The term gomphothere senu stricto refers specifically to trilophodont gomphotheres. The genera Anancus , Morrillia , Paratetralophodon , and Tetralophodon , but also the families Choerolophodontidae and Amebelodontidae were formerly classified as gomphotheres sensu lato. Tetralophodont gompotheres are more closely related to Elephantidae and amebelodonts and choerolophodonts more primitive than trilophodont gomphotheres. [3] [4] [5] In 2019 a study using collagen sequencing found Notiomastodon to form a clade with the American Mastodon, rather than closer to Elephantidae as had previously been supposed. [6] The idea that Mammutidae and Gomphotheriidae are closely related was supported by a morphological study in 2020, which noted the similarity of the molars of the newly resurrected Mammutid genus Miomastodon and those of Gomphotherium subtapiroideum/tassyi. [7] Phylogeny of trilophodont gomphotheres according to Mothé et al., 2016: [5]

Isotopic analyses of South American gomphotheres suggest a wide diet for Notiomastodon platensis , except for the fossils unearthed at the localities in Santiago del Estero and La Carolina in Ecuador. Isotope analyses suggested an exclusive C4 diet, whereas every other South American locality indicates an exclusive C3 or mixed C3 and C4 diet. The results also support the latitudinal gradient of C3 and C4 grasses. The stereomicrowear analyses for N. platensis exhibited average scratch and pit values, which place it within the extant mixed-feeder morphospace and the higher frequency of fine scratches indicated the ingestion of C3 grasses.

Alternatively, the presence of coarse and hypercoarse scratches along with gouges and large pits suggests the ingestion of foliage and lignified portions. The plant microfossil analysis recovered fragments of conifer tracheid and vessel elements with a ray of parenchyma cells, which corroborates the consumption of wood plants, pollen grains, spores, and fibers.

The Aguas de Araxa gomphotheres were generalist feeders and consumed wood elements, leaves, and C3 grasses. [8] Cuvieronius specimens from Chile were exclusively C3 plant eaters, whereas specimens from Bolivia and Ecuador are classified as having a mixed C3 and C4 diet. Notiomastodon showed a wider range of dietary adaptations. Specimens from Quequen Salado in Buenos Aires Province were entirely C3 feeders, whereas the diet of specimens from La Carolina Peninsula in Ecuador was exclusively C4. [9]

The results confirm that ancient diets cannot always be interpreted solely from dental morphology or extrapolated from present relatives. The data from Middle and Late Pleistocene periods indicate that over time, there was a shift in dietary patterns away from predominantly mixed feeders to more specialized feeders. This dietary evolution may have been one of the factors that contributed to the disappearance of South American gomphotheres at the end of the Pleistocene. [10] Climatic change and human predation have also been discussed as possible causes of the extinction. [11]

Gomphothere remains are common at South American Paleo-indian sites. [12] Examples include the early human settlement at Monte Verde, Chile, dating to approximately 14,000 years ago, and the Altiplano Cundiboyacense (Tibitó, 11,740 BP) and the Valle del Magdalena of Colombia. [13] In 2011, remains dating between 10,600 and 11,600 years ago were also found in the El Fin del Mundo (End of the World) site in Sonora, Mexico's Clovis location – the first time such an association was found in a northern part of the continent where gomphotheres had been thought to have gone extinct 30,000 years ago. [14] In July 2014, it was announced that the "position and proximity of Clovis weapon fragments relative to the gomphothere bones at the site suggest that humans did in fact kill the two animals there. Of the seven Clovis points found at the site, four were in place among the bones, including one with bone and teeth fragments above and below. The other three points had clearly eroded away from the bone bed and were found scattered nearby." [15] 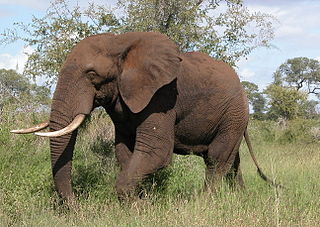 The Proboscidea are a taxonomic order of afrotherian mammals containing one living family (Elephantidae) and several extinct families. This order, first described by J. Illiger in 1811, encompasses the trunked mammals. In addition to their enormous size, later proboscideans are distinguished by tusks and long, muscular trunks; these features were less developed or absent in the smaller early proboscideans. Beginning in the mid-Miocene, most members of this order were very large animals. The largest land mammal today is the African elephant weighing up to 10.4 tonnes with a shoulder height of up to 4 m (13.1 ft). The largest land mammal of all time may have also been a proboscidean: Palaeoloxodon namadicus, which may have weighed up to 22 t with a shoulder height up to 5.2 m (17.1 ft), surpassing several sauropod dinosaurs. 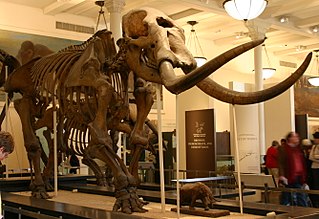 A mastodon is any proboscidean belonging to the extinct genus Mammut that inhabited North and Central America during the late Miocene or late Pliocene up to their extinction at the end of the Pleistocene 10,000 to 11,000 years ago. Mastodons lived in herds and were predominantly forest-dwelling animals that lived on a mixed diet obtained by browsing and grazing, somewhat similar to their distant relatives, modern elephants, but probably with greater emphasis on browsing. 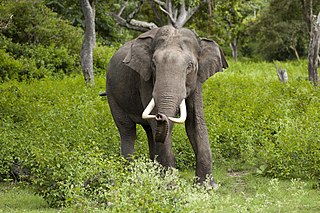 The Elephantidae are a family of large, herbivorous mammals collectively called elephants and mammoths. These are terrestrial large mammals with a snout modified into a trunk and teeth modified into tusks. Most genera and species in the family are extinct. Only two genera, Loxodonta and Elephas, are living. 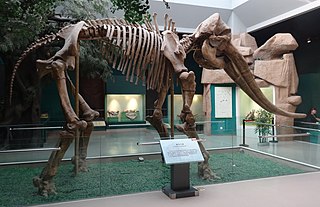 Stegodon, meaning "roofed tooth" because of the distinctive ridges on the animal's molars, is a genus of the extinct subfamily Stegodontinae of the order Proboscidea. It was assigned to the family Elephantidae, but has also been placed in the Stegodontidae. Stegodonts were present from 11.6 million years ago (Mya) to the late Pleistocene, with unconfirmed records of localized survival until 4,100 years ago. Fossils are found in Asian and African strata dating from the late Miocene; during the Pleistocene, they lived across large parts of Asia and East and Central Africa, and in Wallacea as far east as Timor. 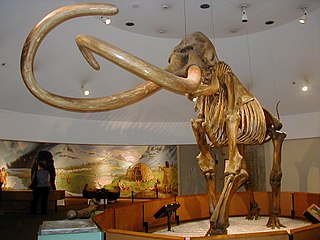 The Columbian mammoth is an extinct species of mammoth that inhabited North America as far north as the northern United States and as far south as Costa Rica during the Pleistocene epoch. It was one of the last in a line of mammoth species, beginning with Mammuthus subplanifrons in the early Pliocene. The Columbian mammoth evolved from the steppe mammoth, which entered North America from Asia about 1.5 million years ago. The pygmy mammoths of the Channel Islands of California evolved from Columbian mammoths. The closest extant relative of the Columbian and other mammoths is the Asian elephant.

Gomphotherium is an extinct genus of proboscids from the Neogene and early Pliocene of Eurasia, Africa, and North America.

Anancus is an extinct genus of anancid proboscidean endemic to Africa, Europe, and Asia, that lived during the Turolian age of the late Miocene until the genus' extinction during the early Pleistocene, roughly from 7—1.5 million years ago.

Cuvieronius is an extinct New World genus of gomphotheres and is named after the French naturalist Georges Cuvier. Alive, specimens typically stood about 2.3 m (7.5 ft) tall at the shoulder, weighed about 3.5 t and would have superficially resembled modern elephants with spiral-shaped tusks. 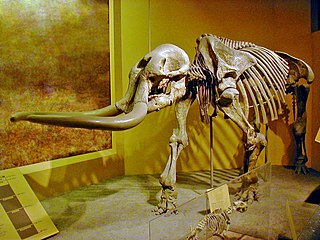 Stegomastodon is an extinct genus of gomphotheres, a family of proboscideans. Its ranged throughout North America from the early Blancan ~4 Ma, to the early Irvingtonian. The South American species have been synonymized with Notiomastodon platensis. 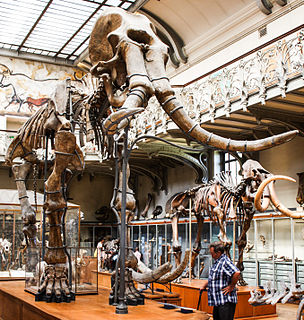 Mammuthus meridionalis, or the southern mammoth, is an extinct species of mammoth native to Europe and Central Asia from the Gelasian stage of the Early Pleistocene, living from 2.5–0.8 mya.

Sinomastodon is an extinct gomphothere genus, from the Late Miocene to the Early Pleistocene deposits of Asia. It is not to be confused with the genus Mammut from a different proboscidean family, whose members are commonly called "mastodons". 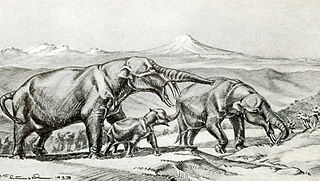 Rhynchotherium is an extinct genus of proboscidea endemic to North America and Central America during the Miocene through Pliocene from 13.650—3.6 Ma, living for approximately 10 million years. 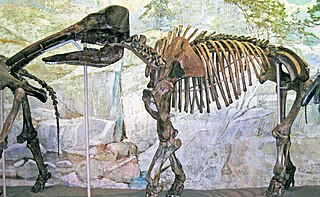 Eubelodon is an extinct genus of gomphothere which lived in North America during the Miocene Epoch. It contains a single species: Eubelodon morrilli. Like other gomphotheres it had a superficially elephant-like appearance with a trunk and tusks.

Notiomastodon is an extinct proboscidean genus of gomphotheres endemic to South America from the Pleistocene to the Holocene. It was among the last known gomphotheres and one of two South American gomphotheres alongside Cuvieronius and was the predominant gomphothere on the continent ranging widely over most of South America excluding the High Andes. The species has a long and convoluted taxonomic history due to its morphological variability and confusion with related gomphothere taxa, which was only resolved during the 2010's.

Elephantida is a group that contains the elephants as well as their extinct relatives, the gomphotheres and stegodontids. The following cladogram shows the relationships among elephantidans, based on hyoid characteristics:

Surameryx is an extinct genus of herbivorous even-toed ungulates belonging to the extinct family Palaeomerycidae. A single species, S. acrensis, is known from the Late Miocene of the Madre de Dios Formation, South America. It is one of the few northern mammals that entered South America before the Pliocene.

Choerolophodontidae is an extinct family of large herbivorous mammals that were closely related to elephants. Two genera are known, Afrochoerodon and Choerolophodon.

The Anancidae are an extinct family of large herbivorous mammals that were closely related to modern elephants. They were assigned to the Gomphotheriidae in the past, but recent authors consider them a distinct family. Under the Gomphotheriidae sensu lato, they were known as the tetralophodont gompotheres based on their molar morphology.