Krakeel River is a town in Sarah Baartman District Municipality in the Eastern Cape province of South Africa.

Village in the Langkloof, east of Avontuur and some 200 km from Port Elizabeth. The name is taken from that of the river. The form Krakeelrivier is preferred for official purposes. [2]

Avontuur is a town situated in the Garden Route District Municipality in the Western Cape province of South Africa. The town is located 13km south-east of Uniondale on an intersection of the R339 and R62 regional routes. The name is Afrikaans for adventure; its origin, however, remains uncertain. The river from which the town takes its name was known in 1778. 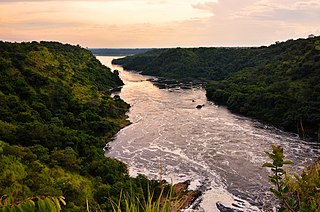 The Nile is a major north-flowing river in northeastern Africa, and is the longest river in Africa and in the world, though some sources cite the Amazon River as the longest. The Nile, which is about 6,650 km (4,130 mi) long, is an "international" river as its drainage basin covers eleven countries, namely, Tanzania, Uganda, Rwanda, Burundi, the Democratic Republic of the Congo, Kenya, Ethiopia, Eritrea, South Sudan, Republic of the Sudan and Egypt. In particular, the Nile is the primary water source of Egypt and Sudan.

The great Congo River, formerly known as the Zaire River under the Mobutu regime, is the second longest river in Africa, shorter only than the Nile, as well as the second largest river in the world by discharge volume, following only the Amazon. It is also the world's deepest recorded river, with measured depths in excess of 220 m (720 ft). The Congo-Lualaba-Chambeshi River system has an overall length of 4,700 km (2,920 mi), which makes it the world's ninth-longest river. The Chambeshi is a tributary of the Lualaba River, and Lualaba is the name of the Congo River upstream of Boyoma Falls, extending for 1,800 km (1,120 mi).

The Democratic Republic of the Congo, also known as DR Congo, the DRC, DROC, Congo-Kinshasa, or simply the Congo, is a country located in Central Africa. It is sometimes anachronistically referred to by its former name of Zaire, which was its official name between 1971 and 1997. It is, by area, the largest country in Sub-Saharan Africa, the second-largest in all of Africa, and the 11th-largest in the world. With a population of over 78 million, the Democratic Republic of the Congo is the most populated officially Francophone country, the fourth-most-populated country in Africa, and the 16th-most-populated country in the world. Currently, eastern DR Congo is the scene of ongoing military conflict in Kivu, since 2015.

The Zambezi is the fourth-longest river in Africa, the longest east-flowing river in Africa and the largest flowing into the Indian Ocean from Africa. The area of its basin is 1,390,000 square kilometres (540,000 sq mi), slightly less than half of the Nile's. The 2,574-kilometre-long river (1,599 mi) rises in Zambia and flows through eastern Angola, along the north-eastern border of Namibia and the northern border of Botswana, then along the border between Zambia and Zimbabwe to Mozambique, where it crosses the country to empty into the Indian Ocean. 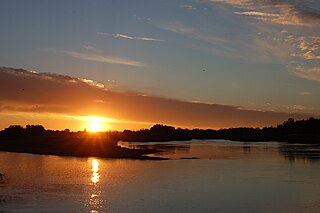 Modimolle, formerly Nylstroom, is a town located near the southern edge of the Waterberg Massif in Limpopo province, South Africa. It is a medium-sized town that focuses primarily on agriculture and farming as well as wildlife and tourism. Modimolle is also located approximately 135 kilometres north of Pretoria, South Africa's capital city.

Koster is a small farming town situated on the watershed between the Orange and Limpopo Rivers in North West Province of South Africa. 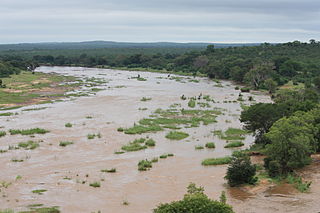 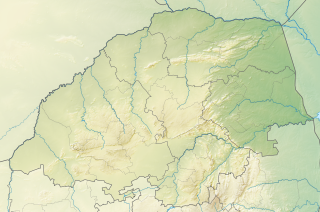 The Kingdom of Mapungubwe (c.1075–1220) was a pre-colonial state in Southern Africa located at the confluence of the Shashe and Limpopo rivers, south of Great Zimbabwe. The name is derived from either TjiKalanga and Tshivenda. The name means "Hill of Jackals". The kingdom was the first stage in a development that would culminate in the creation of the Kingdom of Zimbabwe in the 13th century, and with gold trading links to Rhapta and Kilwa Kisiwani on the African east coast. The Kingdom of Mapungubwe lasted about 80 years, and at its height its population was about 5000 people. The Mapungubwe Collection is a museum collection of artifacts found at the archaeological site and is housed in the Mapungubwe Museum in Pretoria. 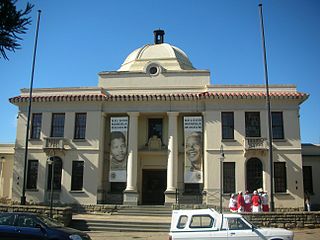 Mthatha , or Umtata, is the main town of the King Sabata Dalindyebo Local Municipality in Eastern Cape province of South Africa and the capital of OR Tambo District Municipality. The town has an airport, previously known by the name K. D. Matanzima Airport after former leader Kaiser Matanzima. Mthatha derives its name from the nearby Mthatha River which was named after the Sneezewood (umtati) trees, famous for their wood and medicinal properties. 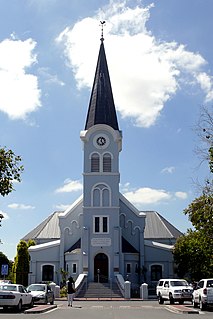 Kuils River is a town in the Western Cape, South Africa, 25 km east of Cape Town. 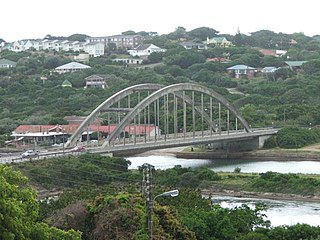 Prieska is a town on the south bank of the Orange River, in the province of the Northern Cape, in western South Africa.

Little Brak River is a settlement in Garden Route District Municipality in the Western Cape province of South Africa.

A ford is a shallow place with good footing where a river or stream may be crossed by wading, or inside a vehicle getting its wheels wet. A ford may occur naturally or be constructed. Fords may be impassable during high water. A low water crossing is a low bridge that allows crossing over a river or stream when water is low but may be covered by deep water when the river is high.