Josef Berger, or Joseph Isadore Berger, was an American journalist, author and speechwriter.

Sherburne Friend Cook was a physiologist by training, and served as professor and chairman of the department of physiology at the University of California, Berkeley. He was also a noted pioneer in population studies of the native peoples of North America and Mesoamerica and in field methods and quantitative analysis in archaeology. 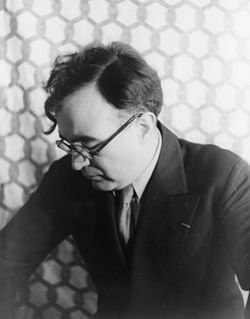 Carlos Antonio de Padua Chávez y Ramírez was a Mexican composer, conductor, music theorist, educator, journalist, and founder and director of the Mexican Symphonic Orchestra. He was influenced by native Mexican cultures. Of his six symphonies, the second, or Sinfonía india, which uses native Yaqui percussion instruments, is probably the most popular.

Leopoldo Méndez was one of Mexico's most important graphic artists and one of country's the most important artists from the 20th century. Méndez's work mostly focused on engraving for illustrations and other print work generally connected to his political and social activism. His most influential work was connected to organizations such as the Liga de Escritores y Artistas Revolucionarios and the Taller de Gráfica Popular creating propaganda related to the ideals of the Mexican Revolution and against the rise of Fascism in the 1930s. Despite his importance in 20th-century artistic and political circles, Méndez was a relatively obscure figure during his life, and remains so afterwards. The reasons for this generally relate to the fact that he believed in working collaboratively and anonymously for the good of society rather than for monetary gain and because the socialist and communist themes of his work fell out of favor with later generations. Despite this, he has received some posthumous recognition with Mexican scholarship considering him to be the successor to graphics artist José Guadalupe Posada.