Daniel Alarcón is a Peruvian-American author. He has been a distinguished visiting writer at Mills College and a visiting writer at California College of the Arts. In spring 2013, he was an investigative reporting fellow at the University of California, Berkeley. Currently, he is an assistant professor of broadcast journalism at Columbia University, his undergraduate alma mater.

Warwick Hugh Anderson, medical doctor, poet, and historian, is Janet Dora Hine Professor of Politics, Governance and Ethics in the Department of History and the Charles Perkins Centre, University of Sydney, where he was previously an Australian Research Council Laureate Fellow (2012-17). He is also honorary professor in the School of Population and Global Health, University of Melbourne. He is a fellow of the Australian Academy of the Humanities, the Academy of Social Sciences in Australia, the Australian Academy of Health and Medical Sciences and the Royal Society of New South Wales from which he received the History and Philosophy of Science Medal in 2015. For the 2018-19 academic year, Anderson will be the Gough Whitlam and Malcolm Fraser chair of Australian Studies at Harvard University. As a historian of science and medicine, Anderson focuses on the biomedical dimensions of racial thought, especially in colonial settings, and the globalisation of medicine and science. He has introduced anthropological insights and themes to the history of medicine and science; developed innovative frameworks for the analysis of science and globalisation; and conducted historical research into the material cultures of scientific exchange. His influential formulation of the postcolonial studies of science and medicine has generated a new style of inquiry within science and technology studies.

Saurabh Dube is an Indian scholar whose work combines history and anthropology, archival and field research, and subaltern studies and postcolonial perspectives. After teaching at the University of Delhi, since 1995 he is Professor of History at the Center of Asian and African Studies at El Colegio de México in Mexico City. Dube has been described as having "...long been one of the most interesting and perceptive scholars addressing the dilemmas of modernity in South Asia." His work has been appreciated for setting up conversations between scholarship on South Asia and Latin America, combining "...sociology, history, anthropology, and postcolonial studies to present a nuanced analysis of the challenges confronting our contemporary understandings of empire and modernity, power and difference, and nation and history." Dube's work has been read for "...its lyrical tenor, conversational approach and inspired indecision between the archive and the field. ... an irresistible feast for the historical imagination... that is visibly kind to theoretical abstractions", while it closely addresses details, especially of the Chhattisgargh region. His last authored book, Subjects of Modernity has been heralded as “ranging widely and globally - from histories of empires and genealogies of disciplines to recent Dalit artwork from India - to explore and carefully delineate a tension he regards as fundamental to the formation of the modern: the modern subject's inevitable entanglement with those subject to modernity. A tour de force, this book offers a critical, timely and powerful sequel to postcolonial and subaltern studies”. The work has also been appreciated as modelling “a form of critical scholarship that is generous in its engagement with the work of its interlocutors even as it pushes against the latest clichés to chart new directions”. Others, however, have found Dube's writing to be far too theoretical and vastly broad in scope.

Ernesto Oroza is a Cuban artist and designer. 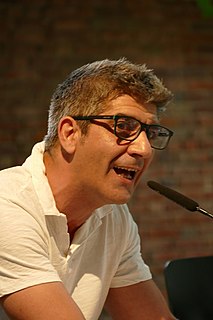 Sergio Raimondi is an Argentine poet. He is also a professor at Universidad Nacional del Sur, where he is in charge of the subject Contemporary Literature. Until June, 2011, he was the director of the Museo del Puerto de Ingeniero White.