Lower Nubia is the northernmost part of Nubia, downstream on the Nile from Upper Nubia. Sometimes, it overlapped Upper Egypt stretching to the First and Second Cataracts (the region known to Greco-Roman geographers as Triakontaschoinos), so roughly until Aswan. A great deal of Upper Egypt and northern Lower Nubia were flooded with the construction of the Aswan High Dam and the creation of Lake Nasser. However the intensive archaeological work conducted prior to the flooding means that the history of the area is much better known than that of Upper Nubia. Its history is also known from its long relations with Egypt.

During the Middle Kingdom Lower Nubia was occupied by Egypt, when the Egyptians withdrew during the First Intermediate Period Lower Nubia seems to have become part of the Upper Nubian Kingdom of Kerma. The New Kingdom occupied all of Nubia and Lower Nubia was especially closely integrated into Egypt, but with the Second Intermediate Period it became the centre of the independent state of Kush based at Napata at some point. Perhaps around 591 BC the capital of Kush was transferred south to Meroe and Lower Nubia became dominated by the Island of Meroe.

With the fall of the Meroitic Empire in the fourth century AD the area became home to X-Group, also known as the Ballana culture who were likely the Nobatae. This evolved into the Christian state of Nobatia by the fifth century. Nobatia was merged with the Upper Nubian state of Makuria, but Lower Nubia became steadily more Arabized and Islamicized and eventually became de facto independent as the state of al-Maris. Most of Lower Nubia was formally annexed by Egypt during the Ottoman conquest of 1517, and it has remained a part of Egypt since then, with only the south being Sudan.

Julien Cooper (2017) states that in antiquity, Cushitic languages were spoken in Lower Nubia (located in the northernmost part of modern day Sudan):

In antiquity, Afroasiatic languages in Sudan belonged chiefly to the phylum known as Cushitic, spoken on the eastern seaboard of Africa and from Sudan to Kenya, including the Ethiopian Highlands." [5]

Julien Cooper (2017) states that in antiquity, Cushitic languages were spoken in Lower Nubia (the northernmost part of modern day Sudan):

In antiquity, Afroasiatic languages in Sudan belonged chiefly to the phylum known as Cushitic, spoken on the eastern seaboard of Africa and from Sudan to Kenya, including the Ethiopian Highlands." [6]

In Lower Nubia there was an Afroasiatic language, likely a branch of Cushitic. By the end of the first millennium CE this region had been encroached upon and replaced by Eastern Sudanic speakers arriving from the south and west, to be identified first with Meroitic and later migrations attributable to Nubian speakers." [7]

The Blemmyes are another Cushitic speaking tribe, or more likely a subdivision of the Medjay/Beja people, which is attested in Napatan and Egyptian texts from the 6th century BC on." [9]

From the end of the 4th century until the 6th century AD, they held parts of Lower Nubia and some cities of Upper Egypt." [10]

He mentions the linguistic relationship between the modern Beja language and the ancient Cushitic Blemmyan language which dominated Lower Nubia and that the Blemmyes can be regarded as a particular tribe of the Medjay:

The Blemmyan language is so close to modern Beja that it is probably nothing else than an early dialect of the same language. In this case, the Blemmyes can be regarded as a particular tribe of the Medjay." [11]

In Upper Egypt and Northern Lower Nubia was present a series of cultures, the Badarian, Amratian, Gerzean, A-Group, B-Group, and C-Group. Linguistic evidence indicates that Cushitic languages were spoken in Lower Nubia, an ancient region which straddles present day Southern Egypt and Northern Sudan, before the arrival of North Eastern Sudanic languages in the Middle Nile Valley. [12] 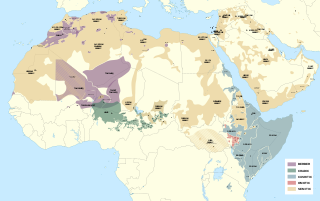 Afroasiatic (Afro-Asiatic), also known as Afrasian or Hamito-Semitic or Semito-Hamitic, is a large language family of about 300 languages that are spoken predominantly in West Asia, North Africa, the Horn of Africa and parts of the Sahel.

The Nubian languages are a group of related languages spoken by the Nubians. They form a branch of the Eastern Sudanic languages, which is part of the wider Nilo-Saharan phylum. Initially, Nubian languages were spoken throughout much of Sudan, but as a result of arabization they are today mostly limited to the Nile Valley between Aswan and Al Dabbah as well as a few villages in the Nuba mountains and Darfur.

Nubians are an ethno-linguistic group of people who are indigenous to the region which is now present-day Northern Sudan and southern Egypt. They originate from the early inhabitants of the central Nile valley, believed to be one of the earliest cradles of civilization. They speak Nubian languages, part of the Northern Eastern Sudanic languages.

Cush or Kush was, according to the Bible, the eldest son of Ham, a son of Noah. He was the brother of Canaan, Mizraim (Egypt) and Phut (Somalia), and the father of the biblical Nimrod mentioned in the "Table of Nations" in Genesis 10:6 and I Chronicles 1:8.

The Beja people are an ethnic Cushitic people inhabiting Sudan, Egypt, and Eritrea. In recent history, they have lived primarily in the Eastern Desert. They number around 1,237,000 people. The majority of Beja people speak the Beja language as a mother tongue, which belongs to the Cushitic branch of the Afro-Asiatic family. In Eritrea and southeastern Sudan, many members of the Beni Amer grouping speak Tigre. While many secondary sources identify the Ababda as an Arabic-speaking Beja tribe due to their cultural links with the Bishaari, this is a misconception: The Ababda do not consider themselves Beja, nor are they so considered by other Beja peoples.

Meroë was an ancient city on the east bank of the Nile about 6 km north-east of the Kabushiya station near Shendi, Sudan, approximately 200 km north-east of Khartoum. Near the site is a group of villages called Bagrawiyah. This city was the capital of the Kingdom of Kush for several centuries from around 590 BC, until its collapse in the fourth century CE. The Kushitic Kingdom of Meroë gave its name to the "Island of Meroë", which was the modern region of Butana, a region bounded by the Nile, the Atbarah and the Blue Nile. 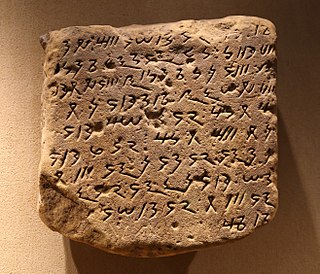 The Meroitic language was spoken in Meroë during the Meroitic period and became extinct about 400 CE. It was written in two forms of the Meroitic alphabet: Meroitic Cursive, which was written with a stylus and was used for general record-keeping; and Meroitic Hieroglyphic, which was carved in stone or used for royal or religious documents. It is poorly understood, owing to the scarcity of bilingual texts.

Medjay was a demonym used in various ways throughout ancient Egyptian history to refer initially to a nomadic group from Nubia and later as a generic term for desert-ranger police. 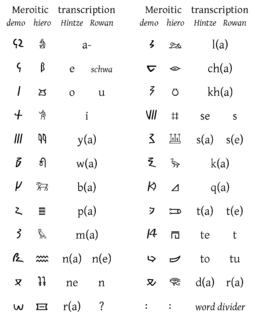 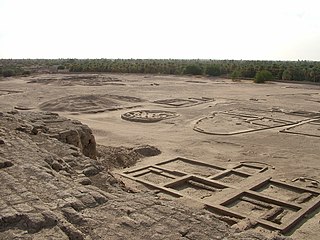 The Kerma culture or Kerma kingdom was an early civilization centered in Kerma, Sudan. It flourished from around 2500 BCE to 1500 BCE in ancient Nubia. The Kerma culture was based in the southern part of Nubia, or "Upper Nubia", and later extended its reach northward into Lower Nubia and the border of Egypt. The polity seems to have been one of a number of Nile Valley states during the Middle Kingdom of Egypt. In the Kingdom of Kerma's latest phase, lasting from about 1700–1500 BCE, it absorbed the Sudanese kingdom of Sai and became a sizable, populous empire rivaling Egypt. Around 1500 BCE, it was absorbed into the New Kingdom of Egypt, but rebellions continued for centuries. By the eleventh century BCE, the more-Egyptianized Kingdom of Kush emerged, possibly from Kerma, and regained the region's independence from Egypt. 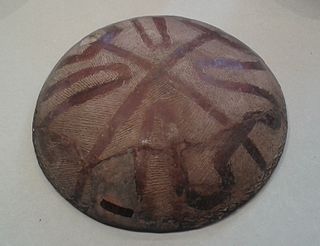 The C-Group culture is an archaeological culture found in Lower Nubia, which dates from ca. 2400 BCE to ca. 1550 BCE. It was named by George A. Reisner. With no central site and no written evidence about what these people called themselves, Reisner assigned the culture a letter. The C-Group arose after Reisner's A-Group and B-Group cultures, and around the time the Old Kingdom was ending in Ancient Egypt. 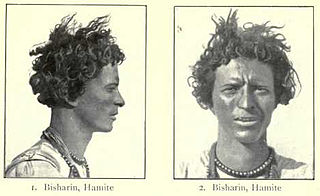 The Bishari(Arabic: البشارية al-Bishāriyyah or البشاريين al-Bishāriyyīn; Beja: Oobshaari) are an ethnic group inhabiting Northeast Africa. They are one of the major divisions of the Beja people. The Bishari speak the Beja language, which belongs to the Afroasiatic family. 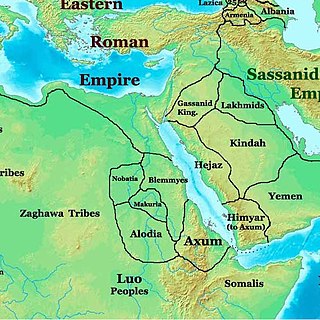 The term Blemmyes is a demonym employed by Greeks, Romans, and possibly Egyptians to denote Eastern Desert people who appeared in written sources from the 7th century BC until the 8th century AD. By the late 4th century, they had occupied Lower Nubia and established a kingdom. From inscriptions in the temple of Isis at Philae, a considerable amount is known about the structure of the Blemmyan state.

The A-Group culture was an ancient civilization that flourished between the First and Second Cataracts of the Nile in Nubia. It lasted from c. 3800 BCE to c. 3100 BCE. 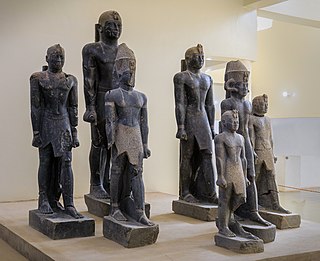 Nubia is a region along the Nile river encompassing the area between the first cataract of the Nile and the confluence of the Blue and White Niles, or more strictly, Al Dabbah. It was the seat of one of the earliest civilizations of ancient Africa, the Kerma culture, which lasted from around 2500 BC until its conquest by the New Kingdom of Egypt under Pharaoh Thutmose I around 1500 BC. Nubia was home to several empires, most prominently the kingdom of Kush, which conquered Egypt in eighth-century BC during the reign of Piye and ruled the country as its 25th Dynasty.

The Kingdom of Kush was an ancient kingdom in Nubia, centered along the Nile Valley in what is now northern Sudan and southern Egypt. 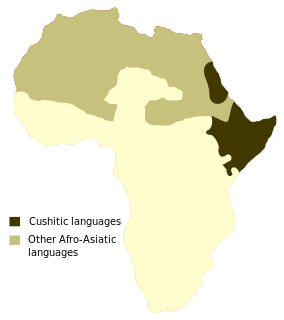 The Cushitic peoples are a grouping of people who are primarily indigenous to Northeast Africa and speak or have historically spoken Cushitic languages of the Afroasiatic language family. Cushitic languages are spoken primarily in the Horn of Africa, as well as the Nile Valley, and parts of the African Great Lakes region. Some examples of these peoples include the Cushitic speaking ethnic groups. In some cases, non-Cushitic language speaking ethnic groups with substantial Cushitic ancestry and who have had a language shift towards speaking Ethiosemitic, Central Semitic, Nilo-Saharan and Omotic languages as their native, heritage, or ancestral language, as well as those who adopt a different langue through immigration in the diaspora are considered Cushitic peoples.