The National Submariners' War Memorial [1] is a war memorial on the Victoria Embankment in London, England, between Waterloo Bridge and Blackfriars Bridge. The memorial is also referred to as the National Submarine War Memorial, [2] the National Submarine Memorial, [3] the Submarine War Memorial [4] and the Submariner Memorial. [5] It commemorates the Royal Navy submariners who died in the First and Second World Wars. The Royal Navy Submarine Service had 57 operational vessels at the start of the First World War in 1914, but expanded to 137 vessels by the time the war ended in 1918, with another 78 under construction. During the war, 54 of its submarines were sunk, and over 1,300 Royal Navy submariners were killed. The memorial is a Grade II* listed building, [4] and it is the focal point of a special memorial walk and laying of wreaths held each year by submariners on the Sunday preceding Remembrance Sunday.

The memorial was funded by public subscription. It was designed by the architect Arthur Heron Ryan Tenison, and bears a bronze sculpture by Frederick Brook Hitch which was cast by the Parlanti Foundry. Tenison and Hitch also collaborated on the memorial to the 8th and 9th Submarine Flotillas at St Mary's Church, Shotley. The memorial was built into a granite pier that former part of the entrance to Temple Pier, a boat landing stage on the Victoria Embankment.

The memorial stands on granite steps, supporting a large bronze bas relief within an architectural frame. The bas relief shows the interior of a submarine and another with nereids swimming on either side. To the right and left are allegorical figures representing Truth and Justice. On either side of the central bronze plaques are 40 bronze wreath hooks in the form of anchors. At the top of the memorial is the inscription "Erected to the memory of the officers and men of the British Navy /who lost their lives serving in submarines 1914–1918 and 1939–1945". On the left hand side is a list of 50 submarines lost during the First World War, and on the right a list of 82 submarines lost during the Second World War. It was unveiled on 15 December 1922 by the Chief of the Submarine Service, Rear Admiral Sir Hugh Sinclair, and dedicated by the Chaplain of the Fleet, Archdeacon Charles Ingles. [6]

Further panels commemorating the Second World War were unveiled on 15 November 1959 by Rear-Admiral Bertram Taylor. An additional plaque was added in 1992 to commemorate the 70th anniversary of the unveiling of the original memorial. The 70th anniversary plaque reads: "National Submarine War Memorial (1922) This plaque commemorates the memorial’s seventieth anniversary and the contribution by the members of the submariners old comrades, London, in their devotion to the upkeep of this memorial, unveiled by Peter P. Rigby C.B.E.J.P.". [6] 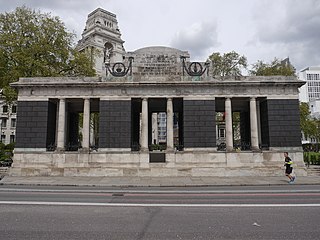 The Tower Hill Memorial is a pair of Commonwealth War Graves Commission memorials in Trinity Square, on Tower Hill in London, England. The memorials, one for the First World War and one for the Second, commemorate civilian merchant sailors and fishermen who were killed as a result of enemy action and have no known grave. The first, the Mercantile Marine War Memorial, was designed by Sir Edwin Lutyens and unveiled in 1928; the second, the Merchant Seamen's Memorial, was designed by Sir Edward Maufe and unveiled in 1955. A third memorial, commemorating merchant sailors who were killed in the 1982 Falklands War, was added to the site in 2005. 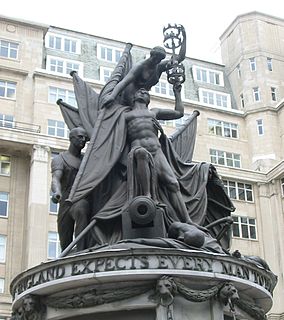 The Nelson Monument is a monument to Admiral Horatio Nelson, in Exchange Flags, Liverpool, England. It was designed by Matthew Cotes Wyatt and sculpted by Richard Westmacott. It stands to the north of the Town Hall and was unveiled in 1813.

Oliver P. Morton and Reliefs is a public artwork by Austrian artist Rudolph Schwarz, located on the east side of the Indiana Statehouse in Indianapolis, Indiana, at the intersection of North Capitol Avenue and West Market Street.

Frederick Brook Hitch (1897–1957), the son of architectural sculptor Nathaniel Hitch, was a British sculptor. He attended the Royal Academy and was a Fellow of the Royal Society of British Sculptors and lived in Hertford, Hertfordshire, England. 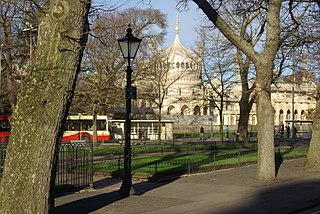 The Old Steine Gardens in Brighton, Brighton and Hove, East Sussex, England, adjacent to the Old Steine thoroughfare, are the site of several monuments of national historic significance.

The Imperial Camel Corps Memorial is an outdoor sculpture commemorating the Imperial Camel Corps, located in Victoria Embankment Gardens, on the Thames Embankment to the east of Charing Cross station, in London, England. The unit of mounted infantry was created in December 1916 from troop that had served in the Gallipoli campaign in the Dardanelles. 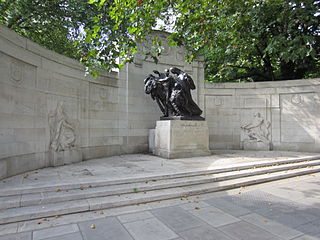 The Anglo-Belgian Memorial, also known as the Belgian Gratitude Memorial or the Belgian Refugees Memorial, is a war memorial on Victoria Embankment in London, opposite Cleopatra's Needle. It was a gift from Belgium, as a mark of thanks for assistance given by the UK during the First World War, and in particular for sheltering thousands of Belgian refugees who fled from the war. It is a Grade II* listed building. 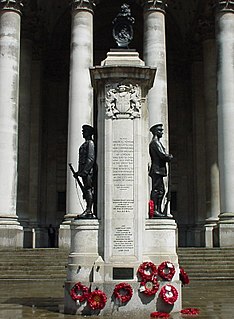 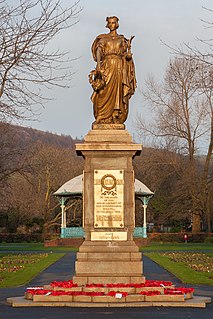 The war memorial at Port Talbot, Wales, commemorates local men killed in the First World War and Second World War. It is located in the Talbot Memorial Park, where it was erected in 1925; the names from the Second World War were added later. It was sculpted by Louis Frederick Roslyn, and was unveiled on 4 July 1925 by Sir William R. Robertson. The park in which it stands was donated to the town by Miss Emily Charlotte Talbot of Margam Castle, and opened to the public in 1926. The memorial has been Grade II* listed since the year 2000.

The London and North Western Railway War Memorial is a First World War memorial outside Euston railway station in central London, England. The memorial was designed by Reginald Wynn Owen, architect to the London and North Western Railway (LNWR) and commemorates employees of the LNWR who were killed in the First World War. The memorial is today a grade II* listed building. 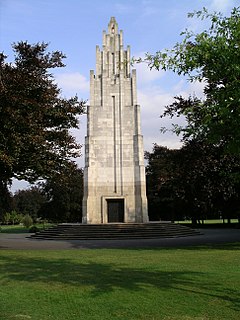 Coventry War Memorial stands at the centre of War Memorial Park, to the south of the city of Coventry in England. The memorial is a tapering tower 87 feet (27 m) high, completed in 1927. It was restored in 2011, and designated as a Grade II* listed building in January 2013. At the same time, the park was itself listed at Grade II, and the gates and gate posts at the park's main entrance were separately Grade II listed.

The Dulwich College War Memorial is located at the eastern front of Dulwich College on College Road in Dulwich in the London Borough of Southwark. It commemorates the alumni of the college who died in both the First and Second World Wars. The memorial was designed by W. H. Atkin-Berry, an alumnus of the college. It was unveiled on 17 June 1921, the Dulwich College Founder's Day, by Major General Sir Webb Gillman, and dedicated by the Dean of Durham, James Welldon. Gillman was an alumnus of the college, and Welldon had served as Master of Dulwich College from 1883 to 1885. It has been Grade II listed on the National Heritage List for England since May 2010. The heritage listing places the memorial within a "visual and contextual relationship" with the Grade II* listed Main College building. 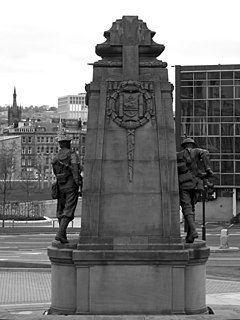 Bradford War Memorial commemorates the 37,000 men the English city of Bradford who served in the British Armed Forces in the First World War. Many of the 5,000 dead had served in the two Bradford Pals battalions and were killed on 1 July 1916, the first day of the First Battle of the Somme. The stone pylon with bronze statues was unveiled in on 1 July 1922, in Victoria Square, beside Prince's Way, to the northeast of the Grade II listed Queen Victoria Memorial. A bronze plaque was added after the Second World War, and the memorial also commemorates later conflicts. It stands between the National Media Museum and Alhambra Theatre, Bradford, and was Grade II listed in 2016.

Streatham War Memorial is a war memorial to the war dead of the London district of Streatham in the two World Wars. It was unveiled in 1922, and is sited near the northwest corner of Streatham Common. 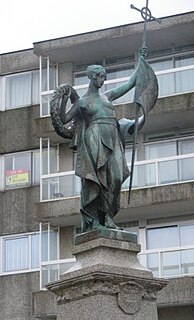 Folkestone War Memorial is in The Leas area of Folkestone, Kent. Unveiled in 1922, it commemorates the 578 men of Folkestone who served in the First World War, and those who passed through Folkestone Harbour during the war, when Folkestone Harbour railway station nearby was an important point of departure and return for passage to the Western Front via Boulogne. The road from the station to the harbour was renamed the "Road of Remembrance" after the war.