Pseudoscorpions are generally beneficial to humans since they prey on clothes moth larvae, carpet beetle larvae, booklice, ants, mites, and small flies. They are tiny, and are rarely noticed due to their small size, despite being common in many environments. When people do see pseudoscorpions, especially indoors, they are often mistaken for ticks or small spiders.[ citation needed ] Pseudoscorpions often carry out phoresis, a form of commensalism in which one organism uses another for the purpose of transport.

A pseudoscorpion has eight legs with five to seven segments each; the number of fused segments is used to distinguish families and genera. They have two very long pedipalps with palpal chelae (pincers), which strongly resemble the pincers found on a scorpion.

The pedipalps generally consist of an immobile "hand" and mobile "finger", the latter controlled by an adductor muscle. Members of the clade Iocheirata, which contains the majority of pseudoscorpions, are venomous, with a venom gland and duct are usually located in the mobile finger; the venom is used to immobilize the pseudoscorpion's prey. During digestion, pseudoscorpions exude a mildly corrosive fluid over the prey, then ingest the liquefied remains.

The abdomen, referred to as the opisthosoma, is made up of twelve segments, each protected by sclerotized plates (called tergites above and sternites below). The abdomen is short and rounded at the rear, rather than extending into a segmented tail and stinger like true scorpions. The color of the body can be yellowish-tan to dark-brown, with the paired claws often a contrasting color. They may have two, four or no eyes. [6]

Pseudoscorpions spin silk from a gland in their jaws to make disk-shaped cocoons for mating, molting, or waiting out cold weather, but they do not have book lungs like true scorpions and the Tetrapulmonata. Instead, they breathe exclusively through tracheae, which open laterally through two pairs of spiracles on the posterior margins of the sternites of abdominal segments 3 and 4. [7]

Some species have an elaborate mating dance, where the male pulls a female over a spermatophore previously laid upon a surface. [8] In other species, the male also pushes the sperm into the female genitals using the forelegs. [9] The female carries the fertilized eggs in a brood pouch attached to her abdomen, and the young ride on the mother for a short time after they hatch. [3]

Between 20 and 40 young are hatched in a single brood, with more than one brood per year possible. The young go through three molts over the course of several years before reaching adulthood. Many species molt in a small, silken igloo that protects them from enemies during this vulnerable period. [10]

After reaching adulthood, pseudoscorpions live 2–3 years. They are active in the warm months of the year, overwintering in silken cocoons when the weather grows cold. Smaller species live in debris and humus. Some species are arboreal, while others are phagophiles, eating parasites in an example of cleaning symbiosis. Some species are phoretic, [11] others may sometimes be found feeding on mites under the wing covers of certain beetles.

More than 3,300 species of pseudoscorpions are recorded in more than 430 genera, with more being discovered on a regular basis. They range worldwide, even in temperate to cold regions such as Northern Ontario and above the timberline in Wyoming's Rocky Mountains in the United States and the Jenolan Caves of Australia, but have their most dense and diverse populations in the tropics and subtropics, where they spread even to island territories such as the Canary Islands, where around 25 endemic species have been found. [12] There are also two endemic species on the Maltese Islands. [2] Species have been found under tree bark, in leaf and pine litter, in soil, in tree hollows, under stones, in caves such as the Movile Cave, at the seashore in the intertidal zone, and within fractured rocks. [3] [13]

Chelifer cancroides is the species most commonly found in homes, where it is often observed in rooms with dusty books. [1] There, the tiny animals (2.5–4.5 mm or 0.10–0.18 in) can find their food such as booklice and house dust mites. They enter homes by "riding along" attached to insects (known as phoresy). The insects employed are necessarily larger than the pseudoscorpion, or they are brought in with firewood.

The oldest known fossil pseudoscorpion, Dracochela deprehendor is known from cuticle fragments of nymphs found in the Panther Mountain Formation near Gilboa in New York, dating to the mid Devonian, around 383 million years ago. [14] It has all of the traits of a modern pseudoscorpion, indicating that the order evolved very early in the history of land animals. [15] Its morphology suggests that it is more primitive than any living pseudoscorpion. [16] As with most other arachnid orders, the pseudoscorpions have changed very little since they first appeared, retaining almost all the features of their original form. After the Devonian fossils, no other fossils of pseudoscorpions are known for over 250 million years until Cretaceous fossils in amber, all belonging to modern families, suggesting that the major diversification of pseudoscorptions had already taken place by this time. [17]

Pseudoscorpions were first described by Aristotle, who probably found them among scrolls in a library where they would have been feeding on booklice. Robert Hooke referred to a "Land-Crab" in his 1665 work Micrographia . Another reference in the 1780s, when George Adams wrote of "a lobster-insect, spied by some labouring men who were drinking their porter, and borne away by an ingenious gentleman, who brought it to my lodging." [18]

The following taxon numbers are calculated as of the end of 2012. [19] 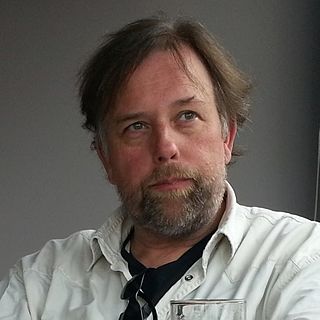 Hans Henderickx was a Belgian entomologist specializing in Invertebrates born in Mol, Belgium.

Synsphyronus is a genus of pseudoscorpions in the family Garypidae, which has been found in Australia, New Zealand and New Caledonia.

Syarinidae is a family of pseudoscorpions in the order Pseudoscorpiones. There are at least 20 genera and 110 described species in Syarinidae.

Ideoroncidae is a family of pseudoscorpions belonging to the order Pseudoscorpiones. Members of the family are known from Asia, Africa, western North America and South America.

Pseudotyrannochthoniidae is a family of pseudoscorpions, belonging to the superfamily Chthonioidea. It represents the most basal and primitive group of living pseudoscorpions, containing 50 species in 5 genera. Living members of the group have a strongly disjunct distribution, likely reflecting ancient vicariance, occurring in Australia, Asia, Southern Africa and Madagascar, Western North America and southern South America. Fossils species are known from the Eocene Baltic and Bitterfeld amber, which represent members of extant Asian genera.