The Thomas Slye House is a historic residence located north of Andrew, Iowa, United States. It is one of over 217 limestone structures in Jackson County from the mid-19th century, of which 101 are houses. The Slye house features a five bay symmetrical facade capped by a gable roof. Slye, a native of England, quarried the stones for the house himself and had a stonemason construct the house. The stones are of various sizes and shapes and laid in courses. The double end chimneys are found on only two other stone houses in the county, and the Slye and DeFries houses have them constructed in brick. [2] Also similar to the DeFries House is the use of jack arches instead on lintels above the windows and doors. It is possible that both houses were constructed by the same stonemason. [2] A single-story frame addition with an attached two-car garage was built onto the back of the houses at a later date. The house was listed on the National Register of Historic Places in 1992. [1]

The Thomas Stone National Historic Site, also known as Haberdeventure or the Thomas Stone House, is a United States National Historic Site located about 25 miles (40 km) south of Washington D.C. in Charles County, Maryland. The site was established to protect the home and property of Thomas Stone, one of the 56 signers of the United States Declaration of Independence. His home and estate were owned by the Stone family until 1936.

Julius Blackburn House, also known as Warwick, is an historic estate located in the western area of Scott County, Kentucky. The oldest section of the structure is a log cabin dating prior to 1799, with a newer stone section built by Thomas Metcalfe for Julius Blackburn in 1799. The property was added to the U.S. National Register of Historic Places on April 14, 1977.

The Samuel Harper Stone House is a historic residence in rural Guernsey County, Ohio, United States. A traditional building constructed in the 1840s by a well-known local builder, it has been named a historic site.

The Frederick Kindleberger Stone House and Barn is a historic farmstead in the rural southeastern region of the U.S. state of Ohio. Located near the village of Clarington in Monroe County, the complex is distinguished by its heavy masonry architecture, and it has been named a historic site.

Masterton-Dusenberry House is a historic home located at Bronxville, Westchester County, New York. It was built in the 1830s in an eclectic Greek Revival style. It was built as a summer home for locally prominent stonemason Alexander Masterton. It is a two-story, wood frame residence on a stone foundation with a clapboard exterior and gable roof. It features a one-story, three bay wood front porch with an elaborate Doric order entablature, fluted columns, and a delicate railing. It also features a roofline balustrade. An addition was completed in the 1920s.

Howell Trevor Pugh, known as H. T. Pugh, was a stonemason who was trained in Wales and worked primarily in Jerome, Idaho. His high quality work popularized the use of lava rock in the Jerome area, eventually including for fine residences in town. More than 20 of his works are preserved and are listed on the National Register of Historic Places. 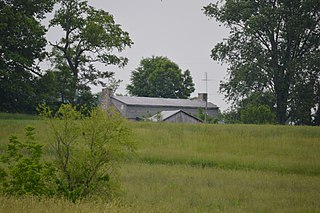 The Thomas Metcalfe House was the first house of Thomas Metcalfe (1780–1855), 10th governor of Kentucky. The house was built by Metcalfe, a stonemason and building contractor, in c.1810.

The Joel Frazer House is a historic residence near Cynthiana, Kentucky, United States, that was built in 1810 by the stonemason and future Kentucky governor Thomas Metcalf.

The William H. Cook Water Tank House is a water tank house located southeast of Jerome, Idaho, United States. The building was constructed circa 1915 and was used to store water for William H. Cook's farm. The rectangular building was constructed with lava rock and contains a metal tank. Although the stone craftsmanship in the building is similar to the work of local stonemason H. T. Pugh, the builder of the house has not been determined.

The Thomas Gooding Water Tank House near Shoshone, Idaho, United States, is an elevated water tank structure that was built of stone in 1919 by sheep rancher and stonemason Bill Darrah. It was built for Thomas Gooding. The elevated water tank is supported on five I-beams. It is a 20-foot (6.1 m) tall 12-foot (3.7 m) diameter structure. Originally a windmill was atop the structure to lift the water, but is no longer present.

The H.A. McKim Building is a historic building located at the southwest corner of Main and Oddie Streets in Tonopah, Nevada. The building was constructed in 1906 for Hiram Albert McKim, who had begun a mercantile business in the town two years prior. Carpenter craftsman J.J. Finley and stonemason E.E. Burdick constructed the building, a two-story stone building designed in the Classical Revival style. The building's design includes an ashlar front facade, a pediment at its parapet, second-story windows ornamented with voussoirs and keystones, and a metal cornice. McKim's store ultimately became the largest mercantile store in central Nevada.

Mary's Grove, also known as the Rabb House, is a historic home located at Lenoir, Caldwell County, North Carolina. It was built between 1932 and 1934, and is a two-story, Colonial Revival-style stone house. Also on the property are the contributing stone well-house, silo, and dairy. The buildings were constructed by master stonemasons Leslie (1900-1957), Clarence (1903–1981), and Earl Lyons (1912-1984).

The DeFries House, Barn and Carpenter Shop are a collection of historic buildings located north-west of Andrew, Iowa, United States. They are three of over 217 limestone structures in Jackson County from the mid-19th century, of which 101 were houses, nine were barns, and 36 were other farm-related buildings. The stones used in the construction are of various sizes and shapes and laid in courses. The double end chimneys on the house are found on only two other stone houses in the county, and the DeFries and Thomas Slye houses have them constructed in brick. Also similar to the Slye house is the use of jack arches instead of lintels above the windows and doors. It is possible that both houses were constructed by the same stonemason. While the stonemason for the Syle house is unknown, John Christoph "Christian" Blessing, who was trained in his native Germany, built this collection of buildings for the DeFries family. He completed the house in 1858 and the horse barn in 1862. The carpenter shop was built in either 1858 or 1862. 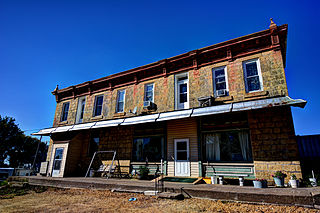 The Kegler-Gonner Store and Post Office, also known simply as Gonner's Store, is a historic commercial building located in Springbrook, Iowa, United States. Christian Kegler had the western portion of this building constructed for his general store about 1874. The post office had relocated here two years previous with Kegler as the postmaster. Three additions were built on to the original structure. The building was in its final form by 1933. John Gonner acquired a part interest in the store in 1904, and operated it outright by 1908. It was still known as Gonner's Store at least into the mid-1980s. The space is now occupied by a restaurant. The second floor houses apartments. At one time the east half of the second floor had been a boarding house.

The McDonald House is a historic residence located west of Winterset, Iowa, United States. William and Barbara McDonald settled in Madison County during the Civil War, and bought this farm in the 1870s. Although not as early as others in the county, this house is a good example of a vernacular limestone farmhouse. This 1½-story structure is composed of locally quarried stone. Its construction is attributed to David Harris, who was one of the last stonemasons still working in the county when this was built. It follows an asymmetrical massed rectangular plan, and it is built on a slightly raised basement. It features two-against-one broken bond, and textured stone characteristic of Harris' work. The house was listed on the National Register of Historic Places in 1993.

The Erasmus Riggs House, near Carlisle, Kentucky, is a stone house built in 1820. It was listed on the National Register of Historic Places in 1983. 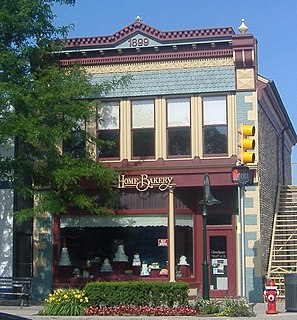 The Rollin Sprague Building, also known as the Old Stone Store, is a commercial building located at 300 Main Street in Rochester, Michigan. It was listed on the National Register of Historic Places in 1999. The building is a rare example of coursed, cobblestone construction, and is the only known commercial building in Michigan featuring this type of construction.

The Cuero I Archeological District, in the vicinity of Cuero, Texas, is a 57,000 acres (230 km2) historic district which was listed on the National Register of Historic Places in 1974. It includes parts of DeWitt County, Texas and Gonzales County, Texas. 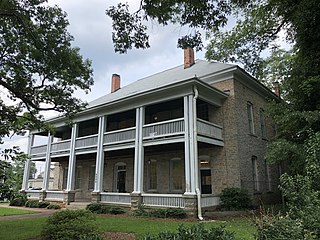 The Seminary is a historic building at 6886 Main Street in Lithonia, Georgia. Originally constructed as a school in 1895, over the years it has also served as a hotel and a private home. It is currently used as a multi-tenant office building. It was entered into the National Register of Historic Places (NRHP) on November 15, 1978.