Thompson House is a historic house on N. Country Road in Setauket, Suffolk County, New York. It was built in 1709 and is a saltbox form dwelling. It is a rectangular, timber frame two story building with a one-story wing. It features a steeply pitched, asymmetrical gable roof with a central brick chimney. [2]

Suffolk County is a predominantly suburban county on Long Island and the easternmost county in the U.S. state of New York. As of the 2010 census, the county's population was 1,493,350, estimated to have decreased slightly to 1,492,953 in 2017, making it the fourth-most populous county in New York. Its county seat is Riverhead, though most county offices are in Hauppauge. The county was named after the county of Suffolk in England, from where its earliest European settlers came.

A saltbox house is a traditional New England style of house with a long, pitched roof that slopes down to the back, generally a wooden frame house. A saltbox has just one story in the back and two stories in the front. The flat front and central chimney are recognizable features, but the asymmetry of the unequal sides and the long, low rear roof line are the most distinctive features of a saltbox, which takes its name from its resemblance to a wooden lidded box in which salt was once kept.

It added to the National Register of Historic Places in 1988. [1]

The Robert A. Thompson House is located along NY 302 in the Thompson Ridge section of the Orange County, New York, town of Crawford. It was built in 1822 in the Federal style. One of the stones in the northwest cable bears his initials and that date. His descendants established the Dutch-Belt dairy farm, which still operates. 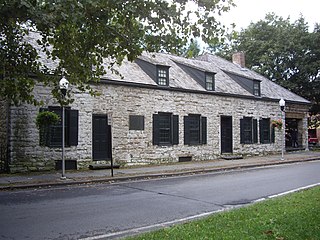 The Senate House State Historic Site is located on Fair Street in Kingston, New York, United States. New York State was established there in 1777, during the Revolutionary War.

The Brewster House in East Setauket, New York was listed on the National Register of Historic Places in 2008. The house was originally built in 1665 and expanded in the early 18th century. It was restored in 1968 to match the 1845 painting of "Long Island Farmhouses" by William Sidney Mount. The site is currently owned by the Ward Melville Heritage Organization. 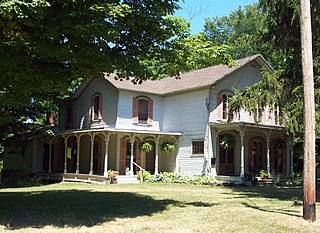 Caroline Church and Cemetery is a historic Episcopalian church and cemetery and also a national historic district at the junction of Dyke and Bates Roads in Setauket, Suffolk County, New York. The church was built in 1729 and is a three-by-four-bay, heavy timber-framed, 42 by 30 foot building sheathed in wood shingles and covered by a gable roof. It features a 42-foot tower surmounted by a 25-foot spire. The complex also includes the parish house, built in 1905, and a barn built in 1893. The cemetery was established in 1734.

William Richardson House is a historic home located at Union Springs in Cayuga County, New York. It was built about 1830 and is a remarkably intact late Federal / early Greek Revival–style farmhouse. It is a 2-story, three-bay brick dwelling main block with a ​1 1⁄2-story side ell and ​1 1⁄2-story rear wing. Also on the property are four late-19th-century / early-20th-century barns.

The Davis Town Meeting House is a historic building located in Coram, New York, United States. For most of the 19th century, it served as the town meeting place for the Town of Brookhaven.

Thompson House is an historic structure located in Poughkeepsie, New York. Built c. 1880, it was listed on the National Register of Historic Places on November 26, 1982. The private residence is considered to be in "excellent" condition.

Sherwood-Jayne House is a historic home and related buildings located at East Setauket in Suffolk County, New York. The property encompasses a two-story dwelling, as well as five accessory buildings, mature planting, split-rail and picket fences, and other landscape features. The construction dates of the house spans from about 1730 to 1940. It is a two-story, six-bay saltbox form dwelling with a two-story rear extansion that forms an "L" shaped plan. The five accessory structures are a large bar, carriage house, corn crib, prive, and pump house. 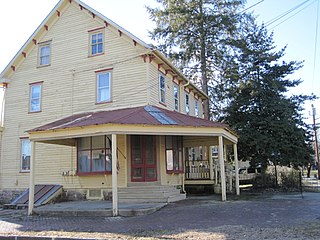 Thompson House was located on the corner of Glover and Penn Streets in Woodbury, Gloucester County, New Jersey, United States. The house was bought by John W. Thompson, glassblower, in 1885, and used as a specialty grocery store from that time until 1956. It was added to the National Register of Historic Places on July 13, 1988. It burned down on January 14, 2012.

The Wilbor House, also known as The Thompson Farm, is a historic home located at Old Chatham in Columbia County, New York. It was built about 1790 and is a two-story, five by two bay, heavy timber frame dwelling on a raised fieldstone foundation. It is topped by a medium pitched gable roof. The house has a one and one half-story wing, with a single-story wing extended from it.

Walter Thompson House and Carriage House is a historic home located at Philipstown in Putnam County, New York. The house was named North Redoubt after the American Revolutionary War redoubt on the hill next to the house. It was built between 1883 and 1890 and is a two-story half-timbered building on a stone foundation in the Tudor Revival style. It has a hipped roof whose overhang is supported by heavy timber brackets. The carriage house consists of two wings connected by a hyphen. The main wing has a gable roof and is topped by a cupola with domical roof.

The Lo Beele House is a historic house at 312 New York Avenue in Brinkley, Arkansas. It is a 2-1/2 story American Foursquare house, with a hip roof, pierced at the front by a pair of round-topped dormers. A single-story porch extends across most of the front, with a low balustrade with turned balusters and square posts. A smaller porch stands on the side, with similar styling. The house was designed by Arkansas architect Charles L. Thompson, and was built about 1910.

Anderson–Thompson House, also known as Thompson–Schultz House , is a historic home located in Franklin Township, Marion County, Indiana. It was built between about 1855 and 1860, and is a 1 1/2-story, ell shaped, Gothic Revival style dwelling. It rests on a low brick foundation, has a steeply-pitched gable roof with ornately carved brackets, and is sheathed in board and batten siding. 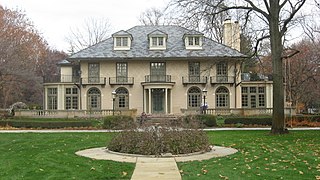 William N. Thompson House, also known as Old Governor's Mansion, is a historic home located at Indianapolis, Marion County, Indiana. It was built in 1920, and is Georgian Revival style buff-colored brick mansion. It consists of a two-story, five-bay, central section flanked by one-story wings. It has a slate hipped roof and features a full width front porch and an elliptical portico at the main entry. The house served as the Governor's Mansion from 1945 to 1970.

Bethel-Christian Avenue-Laurel Hill Historical District is a Setauket, Long Island, New York neighborhood that was nominated for preservation as an endangered historic site in 2017.