Tidal Basin railway station was a railway station near the Royal Victoria Dock, Canning Town, London, on the Eastern Counties and Thames Junction Railway. It opened in 1858, and was between Canning Town and Custom House stations. The station was damaged by bomb damage during the Blitz in 1941 but remained open until closed in 1943 as passenger numbers had fallen resulting from the area suffering from severe bombing damage and never reopened. The area was heavily redeveloped following the War, and today no trace remains; its approximate location is south east of Tarling Road (formerly Alice Street), east of the present day footbridge. Royal Victoria DLR station is located approximately 300 yards east. 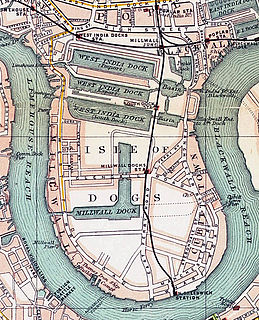 London Docklands is the riverfront and former docks in London. It is located in inner east and southeast London, in the boroughs of Southwark, Tower Hamlets, Lewisham, Newham, and Greenwich. The docks were formerly part of the Port of London, at one time the world's largest port. After the docks closed, the area had become derelict and poverty-ridden by the 1980s. The Docklands' regeneration began later that decade; it has been redeveloped principally for commercial and residential use. The name "London Docklands" was used for the first time in a government report on redevelopment plans in 1971 and has since been almost universally adopted. The redevelopment created wealth, but also led to some conflict between the new and old communities in the area. 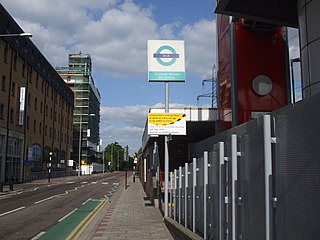 Custom House for ExCeL is a Docklands Light Railway (DLR) and future Elizabeth line station in Custom House, Canning Town in London, England. It is by the Royal Docks in London Borough of Newham. It is situated in Travelcard Zone 3. It takes its name from the old Custom House, which formerly stood nearby, and ExCeL London which it serves.

Royal Victoria Station is on the Docklands Light Railway (DLR) in Canning Town, east London. It opened on 28 March 1994 and is named after the nearby Royal Victoria Dock.

Battersea was a railway station on the West London Extension Railway located on Battersea High Street in Battersea, south-west London. It opened on 1 October 1863 and closed on 21 October 1940 after air raid damage during the Blitz of World War II. 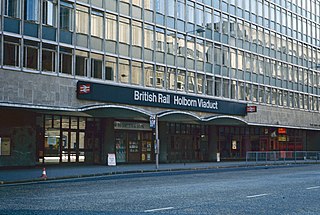 Holborn Viaduct was a railway station in the City of London, providing local and commuter services. It was located to the southeast of Holborn Viaduct, and east of Farringdon Street.

Chelsea & Fulham was a railway station in Walham Green in the London Borough of Hammersmith and Fulham, west London. It was situated between the King's Road and Fulham Road, on the present-day West London Line. The station was opened in 1863 by the West London Railway, and was closed in 1940 having sustained damage during the Blitz of World War II. 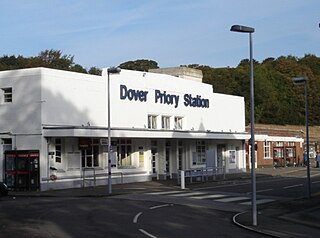 Dover Priory railway station is the southern terminus of the South Eastern Main Line in England, and is the main station serving the town of Dover, Kent, the other open station being Kearsney, on the outskirts. It is 77 miles 26 chains (124.4 km) down the line from London Victoria. The station and all trains that call are operated by Southeastern. 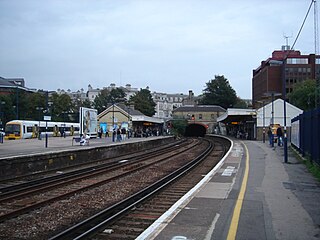 Maidstone East railway station is one of three stations in the central area of Maidstone, Kent, England, but currently the only one with a regular direct service to London. The station is on the Maidstone East Line, 39 miles 76 chains (64.3 km) from London Victoria, and is served by trains operated by Southeastern.

Oxted railway station is on the Oxted line in southern England, serving the commuter town of Oxted, Surrey. It is 20 miles 25 chains (32.69 km) from London Bridge. The station is managed by Southern who operate the majority of train services with a few peak services operated by Thameslink.

Victoria Park was a railway station near Victoria Park, east London, that was on the North London Railway (NLR) between Homerton and Old Ford. The station was situated on the north-east corner of the park, near Wick Road. It opened in June 1856, six years after the opening of the track to the NLR's original terminus at Bow, and two years after the opening of a spur line linking it to the Eastern Counties Railway (ECR) line at Stratford. The original station on the north side of Wick Road was replaced in March 1866 by a larger station at the junction itself to the south of the road, to cope with increased passenger numbers.

Old Ford was a railway station in Old Ford, north of Bow, in east London. It was opened in 1867 by the North London Railway (NLR). It was situated between Victoria Park and Bow, and was located on Old Ford Road, east of the junction with Lefevre Road.

Custom House is an area in the Silvertown region of the London Borough of Newham in east London, England.

Blackwall was a railway station in Blackwall, London, that served as the eastern terminus of the Commercial Railway. It was located on the south side of the East India Docks, near the shore of the River Thames, 3 miles 43 chains (5.7 km) down-line from the western terminus at Fenchurch Street. 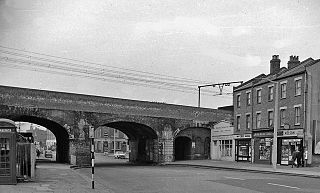 Burdett Road is a disused railway station located in Bow Common, east London. It was opened in 1871 by the Great Eastern Railway and closed in 1941.

Grosvenor Canal was a canal in the Pimlico area of London, opened in 1824. It was progressively shortened, as first the railways to Victoria Station and then the Ebury Bridge housing estate were built over it. It remained in use until 1995, enabling barges to be loaded with refuse for removal from the city, making it the last canal in London to operate commercially. A small part of it remains among the Grosvenor Waterside development.

Connaught Road was a railway station in east London that was opened by the London & St. Katharine Docks Company on 3 August 1880. It was located on Connaught Road, north of the channel joining the Royal Victoria Dock and Royal Albert Dock.

Gallions was the name of two distinct railway stations that adjoined the River Thames by Gallions Reach in Beckton, east London.