Last updated January 26, 2023
This article is about the district. For its eponymous headquarters, see Tiruvannamalai.
District of Tamil Nadu in India

The district is divided into 12 Taluks—Arani, Chengam, Tiruvannamalai, Polur, Thandarampattu, Vandavasi, Kalasapakkam, Chetpet, Kilpennathur, Jamunamarathoor, Cheyyar and Vembakkam. As of 2011, the district had a population of 2,464,875 with a sex-ratio of 994 females for every 1,000 males.

The temple town of Tiruvannamalai is one of the most ancient heritage sites of India and is a centre of the Saiva religion. The Arunachala hill and its environs have been held in great regard by the Tamils for centuries. The temple is grand in conception and architecture and is rich in tradition, history and festivals. The main Deepam festival attracts devotees from far and wide throughout South India. It has historic places besides Tiruvannamalai, Polur, Arani, Vandavasi, Devikapuram connected to East India and French companies. Arani and Vandavasi had important places in the history of pre-independence. In the late Chola period the district was ruled by the Cholan of Sambuvarayar having Padavedu near Arani as HQ. We can now find the fort and note along with a Shiva temple namely Kailasanathar in Arani town.

List of cities having population of one lakh and above as per 2011 Census: [7]

In the District Arani and Tiruvannamalai regions are the highest revenue-generating regions.

In 2006 the Ministry of Panchayati Raj named Tiruvannamalai one of the country's 250 most backward districts (out of a total of 640). [8] It is one of the six districts in Tamil Nadu currently receiving funds from the Backward Regions Grant Fund Programme (BRGF). [8]

Tiruvannamalai District is known for its two major businesses, agriculture and silk saree weaving. Rice cultivation and processing is one of the biggest businesses in this district. 112013 hectares of paddy cultivation is irrigated by 1965 lakes and 18 reservoirs and small dams. It has 18 regulated markets through which the farmers sell their agri products directly to the government. Through these regulated markets, 271411 metric tonnes of paddy harvested in 2007. There are many rice mills to process paddy found throughout the district. The modern rice mill near Cheyyar is the biggest government owned mill and Arani has around 278 rice mills. Kalambur is also has around 20 Rice mills and known for variety of rice called Kalambur Ponni rice. Kalambur Ponni rice is famous across the state and being shipped to places like Chennai, Coimbatore, Vellore, and the like.

The district has a large populace of weavers who are specialize in making Silk sarees. Hand looms are often engaged for weaving, although recently some have turned to mechanized methods of using Power looms. Arani taluk contributes high percent of Silk weaving. Arani is the most important revenue earning town in the district. Though the town is not popular off the state, a bulk of India's Silk apparels is produced by the people of Arani.[ citation needed ]

The district started to industrialize following the establishment of the industrial complex near Cheyyar by the State Industries Promotion Corporation of Tamil Nadu (SIPCOT). [9] This is evidenced by the recent announcements of a 250-acre (1.0 km2) hi-tech Special Economic Zone for automative components, a 300-acre (1.2 km2) electronics hardware park and the commitment from the Taiwanese Shoe Company to set up its unit. [10] In November 2009 the Tamil Nadu cabinet approved the Mahindara and Mahindra's Rs 1800 core automobile project in 450 acres. This unit will produce tractors, SUVs and commercial vehicles and auto parts. [11] Aluminum die cast unit by Ashley Alteams, a joint venture by Ashok Leyland and Finland-based Alteams Oy started its production in January 2010. [12] This High pressure die cast will manufacture automobile and telecommunication components with initial capacity of 7000 ton per year. [13] One of the largest sugar mills in the country - Cheyyar co-operative sugars - is situated near Cheyyar.

Arahanthgiri Jain Math is a Jain math that was established at this ancient Jain site on 8 February 1998, at Thirumalai, Near Arani. [14] The complex includes three Jain caves, four Jain temples and a 16-meter-high sculpture of Neminatha thought to date from the 12th century that is the tallest Jain idol in Tamil Nadu. 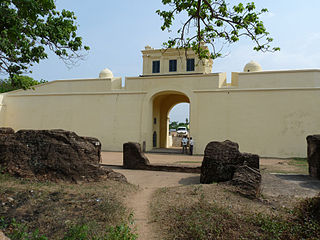 Arcot is a town and urban area of Ranipet district in the state of Tamil Nadu, India. Located on the southern banks of Palar River, the city straddles a trade route between Chennai and Bangalore or Salem, between the Mysore Ghat and the Javadi Hills. As of 2018, the city had a population 129,640. The sweet makkan peda is a local speciality while Arcot biryani, a rice-based traditional food, is also served here. 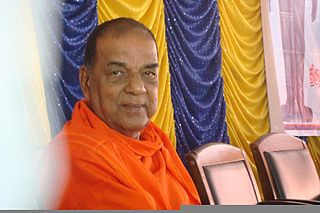 Tamil Jains are Tamils from Tamil Nadu, India, who practice Jainism. The Tamil Jain is a microcommunity of around 85,000, including both Tamil Jains and north Indian Jains settled in Tamil Nadu. They are predominantly scattered in northern Tamil Nadu, largely in the districts of Tiruvannamalai, Kanchipuram, Vellore, Villupuram, Ranipet and Kallakurichi. Early Tamil-Brahmi inscriptions in Tamil Nadu date to the third century BCE and describe the livelihoods of Tamil Jains. Samaṇar wrote much Tamil literature, including the important Sangam literature, such as the Nālaṭiyār, the Silappatikaram, the Valayapathi and the Seevaka Sinthamaṇi. Three of the five great epics of Tamil literature are attributed to Jains. 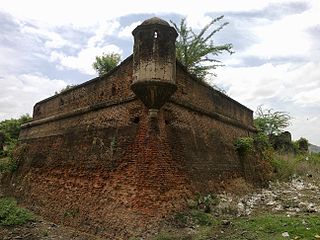 Vandavasi, earlier called Wandiwash is a major town and a municipality in the Tiruvannamalai district of the Indian state of Tamil Nadu. The town is well known in the Carnatic history for the Battle of Wandiwash. Vandavasi town is also the largest manufacturer of kora artefacts including mats, shawls and vessels. As of 2011, the town had a population 74,320.

Cheyyar, officially Tiruvetipuram is a Town in the Tiruvannamalai District in the Tamil Nadu state of South India. The most common name of this town is Cheyyar but it is also referred to as Tiruvetipuram in many government records. The town has an ancient temple called Vedapureeswarar Temple situated on the banks of the river.

Kalambur is a selection grade town panchayat in Polur taluk, Tiruvanamalai district in the Indian state of Tamil Nadu, famous for its rice production. As of the 2011 census, the town had a population of 31,751.

Peranamallur is a panchayat town in Tiruvanamalai district in the Indian state of Tamil Nadu.

Polur is a scenic town, divisional headquarters and a market center in Tiruvannamalai district of Tamil Nadu in India. Located at the foothills of Javvadhi hills, a popular section of Eastern Ghats, Polur is often regarded as Gateway of Eastern ghats. Polur was once a eminent center of Tamil Jainism. The town is home to Dharani sugars, chemicals and fertiliser Pvt., Ltd, and number of agro based industries including coir industries. The famous Chittor - Cuddalore road passes through the town. The town is located 29 Kilometres north of city of Tiruvannamalai and 45 kilometres south of Vellore Metropolis.

Officially spelled Arni, and sometimes Arani, also known as Periya arani is a major commercial, industrial and cultural hub and also a divisional headquarter in Tiruvanamalai district of Tamil Nadu, India. The town is the second largest urban center next to the district headquarters, Tiruvannamalai, and is administered by a selection grade municipality. Arni is home to silk weaving, spinning mills and agricultural industries. Famous Arni silk and a paddy variety named Arni Ponni, known for its rich aroma originates at Arni. The town is often nicknamed as The Silk City. Arni also has a rich cultural heritage - a major center of Tamil Jainism.

Chetput is a major town and a municipality in Tiruvannamalai district in the state of Tamil Nadu, India. Chetput's major economical activity is processing paddy and the town is home to one of the largest organised paddy exchange market of the state. Chetput is one of the very few places of German colonisation in Indian history.

Perungattur is a village located in Tiruvannamalai district, Tamil Nadu, South India. It is suburb of Cheyyar town. Its 24 km away from the temple town Kanchipuram.

Arani taluk is a taluk of Tiruvannamalai district of the Indian state of Tamil Nadu. The headquarters is the town of Arani. 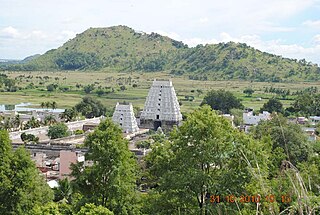 Devikapuram, also called Devigai, is a town and a Panchayat board in Tiruvannamalai district, located in Tamil Nadu, India. The town is famous for handlooms, Silk weaving and ricemills, which process Arni Ponni rice. Located on the Polur - Sadras state highway, 45 kilometres from the city of Tiruvannamalai, also the district headquarters.

Mullandrum is a village in Tiruvanamalai district in the state of Tamil Nadu, India. The postal code of Mullandrum is 632512. The name "Mulladrum" is derived from Mullai Vanam. Also called as "Mulladhiram".

Ariyathur is a village in Polur Taluk in Tiruvannamalai District of Tamil Nadu, India. It is located 47 km towards east from district headquarters Thiruvannamalai. 167 km from state capital Chennai.

Purisai is a village panchayat of Cheyyar Taluk. The village is famous for temples and festivals.

Wikimedia Commons has media related to Tiruvannamalai district .
This page is based on this Wikipedia article
Text is available under the CC BY-SA 4.0 license; additional terms may apply.
Images, videos and audio are available under their respective licenses.