The Trebouxiophyceae are a class of green algae, in the division Chlorophyta. [2] Their circumscription within the green algae is not well established due to the need for more genetic studies at higher levels within the group.[ citation needed ]

Genera without intervening taxonomy include:

Chlorophyta or Prasinophyta is a taxon of green algae informally called chlorophytes. The name is used in two very different senses, so care is needed to determine the use by a particular author. In older classification systems, it refers to a highly paraphyletic group of all the green algae within the green plants (Viridiplantae) and thus includes about 7,000 species of mostly aquatic photosynthetic eukaryotic organisms. In newer classifications, it refers to the sister clade of the streptophytes/charophytes. The clade Streptophyta consists of the Charophyta in which the Embryophyta emerged. In this latter sense the Chlorophyta includes only about 4,300 species. About 90% of all known species live in freshwater. Like the land plants, green algae contain chlorophyll a and chlorophyll b and store food as starch in their plastids.

Desmidiales, commonly called desmids, are an order in the Charophyta, a division of green algae in which the land plants (Embryophyta) emerged. Or in other words, Desmid,, order of single-celled microscopic green algae. Desmids are sometimes treated as a family (Desmidiaceae) of the order Zygnematales. 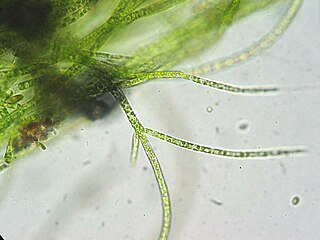 The green algae are a large, informal grouping of algae consisting of the Chlorophyta and Charophyta/Streptophyta, which are now placed in separate divisions, together with the more basal Mesostigmatophyceae, Chlorokybophyceae and Spirotaenia.

Prasiolales is an order of green algae in the class Trebouxiophyceae. 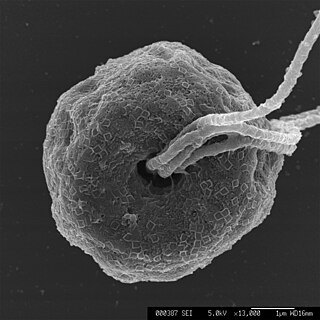 Pyramimonadales are an order of green algae in the Chlorophyta. 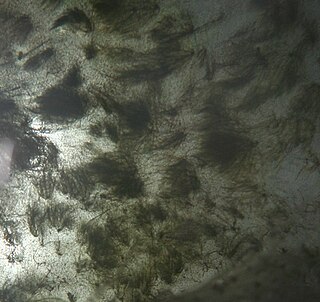 Bryopsis is a genus of marine green algae in the family Bryopsidaceae. It is frequently a pest in aquariums, where it is commonly referred to as hair algae.

Golenkinia is a genus of green algae first described in 1894 by Robert Chodat. The genus is named for the Russian phycologist Mikhail Iljitsch Golenkin. Golenkinia species live in fresh water and are found around the world.

Helicosporidium is a genus of green algae in the class Trebouxiophyceae. It is a parasite found in the gut of insects, and a close relative of Prototheca.

Leptosira is a genus of green algae, in the class Trebouxiophyceae.

Trentepohlia is a genus of filamentous chlorophyte green algae in the family Trentepohliaceae, living free on terrestrial supports such as tree trunks and wet rocks or symbiotically in lichens. The filaments of Trentepohlia have a strong orange colour caused by the presence of large quantities of carotenoid pigments which mask the green of the chlorophyll.

In taxonomy, the Pleurastrophyceae are a class of green algae, in the division Chlorophyta. It was created by Mattox and Stewart in 1984, containing four genera. More recent classifications tend to split the group. On the one hand, Tetraselmis seems to be a sister to the so-called UTC clade, thus making it part of the (paraphyletic) Prasinophyceae. The other three genera were Pleurastrum, Trebouxia, and Pseudotrebouxia, and most of the species which had been in those genera have been placed in the Trebouxiophyceae. However, Pleurastrum insigne, which had been specified as the type of Pleurastrophyceae, turns out to be part of the Chlorophyceae.

Rhopalosolen is a genus of green algae in the class Trebouxiophyceae.

Chlorochytrium is a genus of green algae, in the family Chlorochytriaceae.

Dictyochloropsis reticulata is a species of green algae in the Trebouxiales. It is a known as a photobiont with several lichen species, like Lobaria pulmonaria, but also as a free-living soil alga as well. Phylogenetic analysis of rRNA sequence data revealed that the species shares a sister group relationship with two other green algae that lack motile stages, Chlorella saccharophila and C. luteoviridis.

The Klebsormidiaceae are a family containing five genera of charophyte green alga forming multicellular, non-branching filaments. A fourth genus Chlorokybus was previously included as well, but this problematic and poorly known genus is now placed in a separate class Chlorokybophyceae. 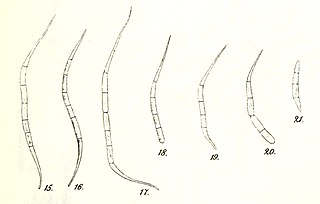 Raphidonema is a genus of filamentous green alga comprising five species. It is a member of the Trebouxiophyceae.

Myrmecia is a genus of green algae that is associated with lichens.

Lichen anatomy and physiology is very different from the anatomy and physiology of the fungus and/or algae and/or cyanobacteria that make up the lichen when growing apart from the lichen, either naturally, or in culture. The fungal partner is called the mycobiont. The photosynthetic partner, algae or cyanobacteria, is called the photobiont. The body of a lichens that does not contain reproductive parts of the fungus is called the thallus. The thallus is different from those of either the fungus or alga growing separately. The fungus surrounds the algal cells, often enclosing them within complex fungal tissues unique to lichen associations. In many species the fungus penetrates the algal cell wall, forming penetration pegs or haustoria similar to those produced by pathogenic fungi. Lichens are capable of surviving extremely low levels of water content (poikilohydric). However, the re-configuration of membranes following a period of dehydration requires several minutes at least.

Symbiosis in lichens is the mutually helpful symbiotic relationship of green algae and/or blue-green algae (cyanobacteria) living among filaments of a fungus, forming lichen.

it is also the very well-known album by WUDU SJON