Ukraine at the FIFA World Cup

This is a record of Ukraine's results at the FIFA World Cup . The FIFA World Cup, sometimes called the Football World Cup or the Soccer World Cup, but usually referred to simply as the World Cup, is an international association football competition contested by the men's national teams of the members of Fédération Internationale de Football Association (FIFA), the sport's global governing body. The championship has been awarded every four years since the first tournament in 1930, except in 1942 and 1946, due to World War II.

The tournament consists of two parts, the qualification phase and the final phase (officially called the World Cup Finals). The qualification phase, which currently take place over the three years preceding the Finals, is used to determine which teams qualify for the Finals. The current format of the Finals involves 32 teams competing for the title, at venues within the host nation (or nations) over a period of about a month. The World Cup Finals is the most widely viewed sporting event in the world, with an estimated 715.1 million people watching the 2006 tournament final. [1]

Ukraine have appeared in the finals of the FIFA World Cup on one occasion in 2006 where they reached the quarter finals. [2] [3] [4] It was their first ever official appearance at international finals since breaking away from the Soviet Union in 1991. However, before 1996 some of its players played for the Soviet Union national football team and CIS national football team. Among few there were Oleksiy Mykhaylychenko, Hennadiy Lytovchenko, Oleh Luzhny, Ivan Hetsko and others.

At the 2006 FIFA World Cup, Ukraine was drawn in Group H along with Spain, Saudi Arabia, and Tunisia.

Andriy Rusol put the Ukraine ahead in the fourth minute when the ball went in off his knee's at the near post after a corner from the right by Maksym Kalynychenko. Serhiy Rebrov got the second goal after 36 minutes with a long range right footed shot that flew past the goalkeeper. Andriy Shevchenko then scored in the 46th minute with a header from six yards out after a free kick from the left by Maksym Kalynychenko. Maksym Kalynychenko got the fourth goal in the 84th minute after a low cross from Andriy Shevchenko from the left which he shot right footed to the roof of the net. [11]

In the 70th minute, Shevchenko was tripped in the penalty box by Karim Hagui and scored from the resulting penalty, shooting right footed to the goalkeepers left as he dived to his right. Ukraine's victory sealed second spot in the group and a second round match against Switzerland. Vyacheslav Sviderskyi and Andriy Rusol were both suspended from the second round after picking up bookings in the match. [12]

Second Round – Switzerland vs Ukraine

Seven players have been fielded in all five of Ukraine's FIFA World Cup matches. Of those seven, Andriy Nesmachniy, Anatoliy Tymoshchuk and goalkeeper Oleksandr Shovkovskyi have not missed a single minute.

Ukraine's team captain and superstar Andriy Shevchenko was the only player to score more than one goal at the 2006 World Cup. 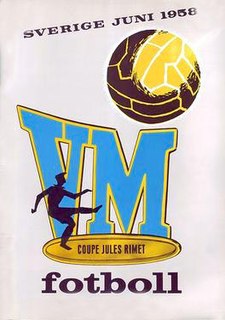 The 1958 FIFA World Cup was the sixth FIFA World Cup, a quadrennial football tournament for men's senior national teams, and was played in Sweden from 8 to 29 June 1958. It was the first FIFA World Cup to be played in a Nordic country. Brazil beat Sweden 5–2 in the final in the Stockholm suburb of Solna to claim their first title. The tournament also marked the arrival of a then 17-year-old Pelé on the world stage. 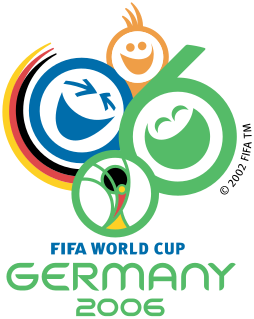 The 2006 FIFA World Cup was the 18th FIFA World Cup, the quadrennial international football world championship tournament. It was held from 9 June to 9 July 2006 in Germany, which had won the right to host the event in July 2000. Teams representing 198 national football associations from all six populated continents participated in the qualification process which began in September 2003. Thirty-one teams qualified from this process, along with the host nation, Germany, for the finals tournament. It was the second time that Germany staged the competition, the first as a unified country, and the tenth time that it was held in Europe.

This article lists the confirmed national football squads for the 2006 FIFA World Cup tournament held in Germany, between 9 June and 9 July 2006. Before announcing their final squad, several teams named a provisional squad of 23 to 33 players, but each country's final squad of 23 players had to be submitted by 15 May 2006. Replacement of injured players was permitted until 24 hours before the team's first World Cup game. Players marked (c) were named as captain for their national squad. Number of caps counts until the start of the World Cup, including all pre-tournament friendlies. Club information is that used by FIFA. Players for whom this information changed during or prior to the tournament are indicated by footnotes.

Maksym Serhiyovych Kalynychenko is a retired Ukrainian football midfielder, who played in central midfield or as a winger. Observers noted his pace, creativity, and accuracy in free kicks / penalties.

Oleksandr Ivanovych Yatsenko is a Ukrainian former football player. He currently works at Helios Kharkiv youth academy. He played as a defender.

Play in Group C of the 2006 FIFA World Cup began on 10 June and completed on 21 June 2006. Argentina won the group, and advanced to the second round, along with Netherlands. The two sides tied for points in the standings, but Argentina won the tie-break on goal difference, and so won the group with the Netherlands in second place. Ivory Coast and Serbia and Montenegro failed to advance.

Play in Group E of the 2006 FIFA World Cup began on 12 June and completed on 22 June 2006. Eventual champions Italy won the group, and advanced to the second round, along with Ghana. The Czech Republic and the United States failed to advance.

Play in Group G of the 2006 FIFA World Cup began on 13 June and completed on 23 June 2006. Switzerland won the group, and advanced to the second round, along with eventual tournament runners-up France. South Korea and Togo failed to advance. Switzerland were the only team not to concede a goal during the group stage of the tournament and would become the first team to be knocked out of a World Cup without conceding, losing on penalties after a 0–0 draw with Ukraine in Round of 16.

Play in Group H of the 2006 FIFA World Cup began on 14 June and completed on 23 June 2006. Spain won the group, and advanced to the second round, along with Ukraine. Tunisia and Saudi Arabia failed to advance.

In the 2006 FIFA World Cup, the knockout stage was the second and final stage of the World Cup, following the group stage. The top two teams from each group advance to the knockout stage to compete in a single-elimination style tournament. A match was played between the two losing teams of the semi-finals to determine which team finished in third place.

Standings and results for Group B of the UEFA Euro 2008 qualifying tournament.

Ukraine national football team 1992 was the first composed team that represented the now independent Ukraine. However, it was not the first to represent Ukraine. The country while being part of the Soviet Union used to play several games mostly against the Turkish nationals back 1930s. Those games, however, later were scratched and went into the oblivion.

Standings and results for Group 6 of the UEFA Euro 2004 qualifying tournament.

Angola have appeared in the finals of the FIFA World Cup on one occasion in 2006, since becoming a member of FIFA in 1980. They were eliminated in the Group Stage after a defeat by Portugal and two draws with Mexico and Iran. In their last match, Flávio scored Angola's first and only goal of the tournament.

Togo have appeared in the finals of the FIFA World Cup on one occasion in 2006. 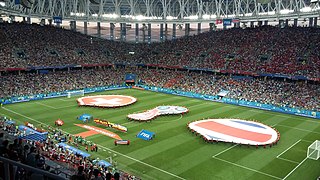 The FIFA World Cup, sometimes called the Football World Cup or the Soccer World Cup, but usually referred to simply as the World Cup, is an international association football competition contested by the men's national teams of the members of Fédération Internationale de Football Association (FIFA), the sport's global governing body. The championship has been awarded every four years since the first tournament in 1930, except in 1942 and 1946 due to World War II.

These are the statistics for the 2006 FIFA World Cup which took place in Germany. This article will identify the goal scorers in all matches in the 2006 FIFA World Cup, which players assisted in goals scored during the competition, overall scoring statistics, how matches concluded in the competition, match awards, clean sheets by teams participated, overall results, and the stadiums the games competed in.