A unipolar neuron is a neuron in which only one process, called a neurite, extends from the cell body. The neurite then branches to form dendritic and axonal processes. Most neurons in the central nervous systems of invertebrates, including insects, are unipolar [2] . The cell bodies of invertebrate unipolar neurons are often located around the edges of the neuropil, in the so-called cell-body rind [3] .

Most neurons in the central nervous systems of vertebrates, including mammals, are multipolar [4] . Multipolar neurons extend multiple processes extend from the cell body, including dendrites and axons. Some neurons in the vertebrate brain have a unipolar morphology: a notable example is the unipolar brush cell, found in the cerebellum and granule region of the dorsal cochlear nucleus.

A third morphological class, bipolar neurons, extend just one axon and dendritic process from the cell body. Examples of bipolar neurons include most invertebrate sensory neurons and bipolar cells of the vertebrate retina.

Some vertebrate sensory neurons are classified as pseudo-unipolar. Pseudo-unipolar neurons initially develop as bipolar cells, but at some point the two processes that extend from the cell body fuse to form a single neurite [4] . The axon then splits into two branches. Sensory neurons with cell bodies in the dorsal root ganglia of the vertebrate spinal cord are pseudo-unipolar: one branch projects to the periphery (to sensory receptors in the skin, joints, and muscle), the other to the spinal cord. 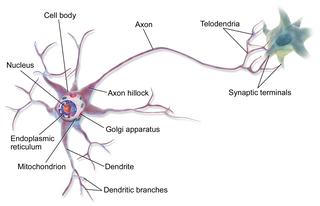 An axon, or nerve fiber, is a long, slender projection of a nerve cell, or neuron, in vertebrates, that typically conducts electrical impulses known as action potentials away from the nerve cell body. The function of the axon is to transmit information to different neurons, muscles, and glands. In certain sensory neurons, such as those for touch and warmth, the axons are called afferent nerve fibers and the electrical impulse travels along these from the periphery to the cell body, and from the cell body to the spinal cord along another branch of the same axon. Axon dysfunction has caused many inherited and acquired neurological disorders which can affect both the peripheral and central neurons. Nerve fibers are classed into three types – group A nerve fibers, group B nerve fibers, and group C nerve fibers. Groups A and B are myelinated, and group C are unmyelinated. These groups include both sensory fibers and motor fibers. Another classification groups only the sensory fibers as Type I, Type II, Type III, and Type IV. 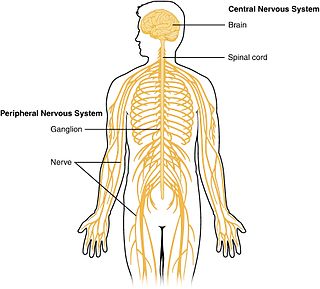 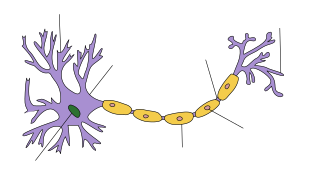 Dendrites, also dendrons, are branched protoplasmic extensions of a nerve cell that propagate the electrochemical stimulation received from other neural cells to the cell body, or soma, of the neuron from which the dendrites project. Electrical stimulation is transmitted onto dendrites by upstream neurons via synapses which are located at various points throughout the dendritic tree. Dendrites play a critical role in integrating these synaptic inputs and in determining the extent to which action potentials are produced by the neuron. Dendritic arborization, also known as dendritic branching, is a multi-step biological process by which neurons form new dendritic trees and branches to create new synapses. The morphology of dendrites such as branch density and grouping patterns are highly correlated to the function of the neuron. Malformation of dendrites is also tightly correlated to impaired nervous system function. Some disorders that are associated with the malformation of dendrites are autism, depression, schizophrenia, Down syndrome and anxiety.

A neuron, neurone or nerve cell, is an electrically excitable cell that communicates with other cells via specialized connections called synapses. It is the main component of nervous tissue in all animals except sponges and placozoa. Plants and fungi do not have nerve cells. 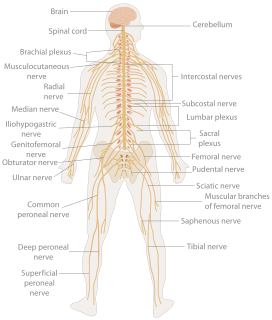 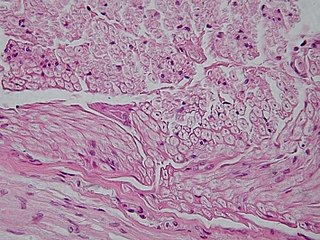 Nervous tissue, also called neural tissue, is the main tissue component of the nervous system. The nervous system regulates and controls bodily functions and activity and consists of two parts: the central nervous system (CNS) comprising the brain and spinal cord, and the peripheral nervous system (PNS) comprising the branching peripheral nerves. It is composed of neurons, also known as nerve cells, which receive and transmit impulses, and neuroglia, also known as glial cells or glia, which assist the propagation of the nerve impulse as well as provide nutrients to the neurons. 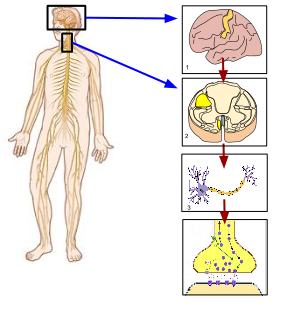 The somatic nervous system is the part of the peripheral nervous system associated with the voluntary control of body movements via skeletal muscles. 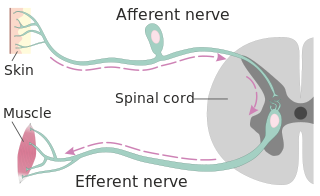 The dorsal column–medial lemniscus pathway (DCML) is a sensory pathway of the central nervous system that conveys sensations of fine touch, vibration, two-point discrimination, and proprioception (position) from the skin and joints. It transmits information from the body to the primary somatosensory cortex in the postcentral gyrus of the parietal lobe of the brain. The pathway receives information from sensory receptors throughout the body, and carries this in nerve tracts in the white matter of the dorsal columns of the spinal cord to the medulla, where it is continued in the medial lemniscus, on to the thalamus and relayed from there through the internal capsule and transmitted to the somatosensory cortex. The name dorsal-column medial lemniscus comes from the two structures that carry the sensory information: the dorsal columns of the spinal cord, and the medial lemniscus in the brainstem. 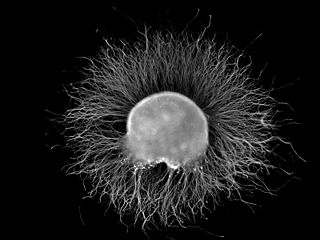 A multipolar neuron is a type of neuron that possesses a single axon and many dendrites, allowing for the integration of a great deal of information from other neurons. These processes are projections from the neuron cell body. Multipolar neurons constitute the majority of neurons in the central nervous system. They include motor neurons and interneurons/relaying neurons are most commonly found in the cortex of the brain and the spinal cord. Peripherally, multipolar neurons are found in autonomic ganglia. 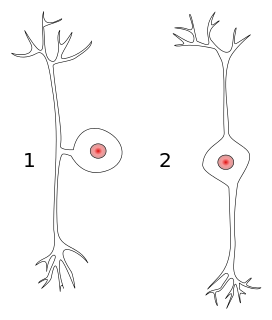 A pseudounipolar neuron is a type of neuron which has one extension from its cell body. This type of neuron contains an axon that has split into two branches; one branch travels to the peripheral nervous system and the other to the central nervous system. A single process arises from the cell body and then divides into an axon and a dendrite. They develop embryologically as bipolar in shape and are thus termed pseudounipolar instead of unipolar.

A bipolar neuron, or bipolar cell, is a type of neuron that has two extensions. Many bipolar cells are specialized sensory neurons for the transmission of sense. As such, they are part of the sensory pathways for smell, sight, taste, hearing, touch, balance and proprioception. The other shape classifications of neurons include unipolar, pseudounipolar and multipolar. During embryonic development, pseudounipolar neurons begin as bipolar in shape but become pseudounipolar as they mature. 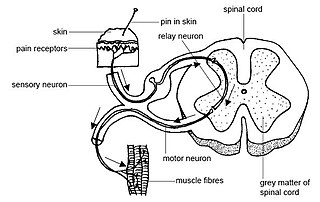 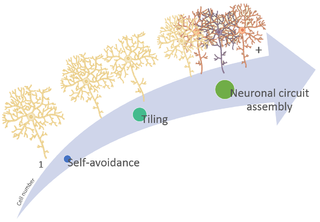 Neuronal self-avoidance, or isoneural avoidance, is an important property of neurons which consists in the tendency of branches arising from a single soma to turn away from one another. The arrangements of branches within neuronal arbors are established during development and result in minimal crossing or overlap as they spread over a territory, resulting in the typical fasciculated morphology of neurons.

Segmentation is the physical characteristic by which the human body is divided into repeating subunits called segments arranged along a longitudinal axis. In humans, the segmentation characteristic observed in the nervous system is of biological and evolutionary significance. Segmentation is a crucial developmental process involved in the patterning and segregation of groups of cells with different features, generating regional properties for such cell groups and organizing them both within the tissues as well as along the embryonic axis.