The following players were called up for the friendly game against Greece and the 2023 UEFA European Under-21 Championship qualification Group I game against Kazakhstan in September 2021. [2]

Because of the age restriction, a player can't be in the team for very long and the most promising young players spend little time with the under-21 team before making their senior national team debut.

Note:Club(s) represents the permanent clubs during the player's time in the under-21 national team. Players in bold have played at least one game for the senior Danish national team.

Note:Club(s) represents the permanent clubs represented in the games in which the player's scored for the under-21 national team. Players in bold have played at least one game for the senior Danish national team.

The Denmark national football team represents Denmark in men's international football competition. It is controlled by the Danish Football Association (DBU), the governing body for the football clubs which are organised under DBU. Denmark's home stadium is Parken Stadium in the Østerbro district of Copenhagen; their head coach is Kasper Hjulmand. 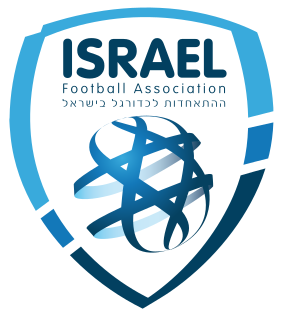 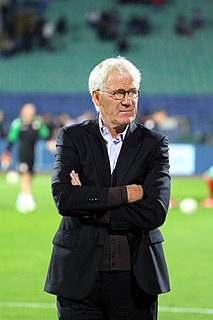 Morten Per Olsen is a Danish football manager and former player. He was the head coach of the Denmark national team for 15 years from 2000 until 2015, guiding Denmark to the 2002 FIFA World Cup, 2004 European Championship, 2010 FIFA World Cup and 2012 European Championship. He has also managed Brøndby IF to two Danish Superliga championships and Ajax to the Double of the 1998 Eredivisie championship and Dutch Cup trophy. He is one of only two persons ever in football to achieve 100 national matches for his country both as player as well as coach.

Michael Silberbauer is a Danish football manager and former professional player. He currently is the assistant coach of FC Basel.

Lars Christian Olsen a Danish former footballer and current manager, who was most recently the manager of and Esbjerg fB in the Danish Superliga. He started his coaching career with Randers in 2003, guiding them to promotion for the Danish Superliga. He led the team to the 2006 Danish Cup trophy, and Olsen was named 2006 Danish Manager of the Year. He then coached Odense BK from 2007 to 2010.

Johan Hindsgaul Absalonsen is a Danish former professional footballer who played as a left winger.

Nadia Nadim is an Afghan-Danish football player who plays as a striker for NWSL club Racing Louisville FC as well as for the Danish national team. Nadim is considered the most influential and greatest Afghan female football player of all time, particularly because she won the French league title in the 2020-21 season with Paris Saint-Germain. 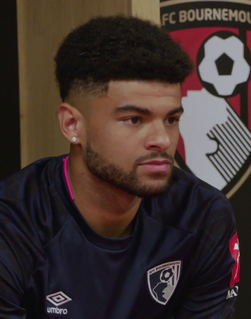 Philip Anyanwu Billing is a Danish professional footballer who plays as a central midfielder for EFL Championship club AFC Bournemouth and the Denmark national team.

Kasper Dolberg Rasmussen is a Danish professional footballer who plays as a forward for Ligue 1 club Nice and the Denmark national team. Dolberg made his senior debut at Silkeborg IF in May 2015. He joined Ajax in July 2015 and made his debut for the club in July 2016. He represented Denmark at under-16, under-17, under-19 and under-21 level before making his senior international debut in November 2016.

This article shows statistics of individual players for the football club F.C. Copenhagen. It also lists all matches that F.C. Copenhagen played in the 2015–16 season.

This article shows statistics of individual players for the football club F.C. Copenhagen. It also lists all matches that F.C. Copenhagen played in the 2016–17 season.

Andreas Skov Olsen is a Danish professional footballer who plays as a winger for Serie A club Bologna and the Denmark national team.

The 2019–20 Danish Superliga was the 30th season of the Danish Superliga. F.C. Copenhagen were the defending champions. The season started on 12 July 2019 and was scheduled to end in May 2020, before being suspended due to the COVID-19 pandemic. The season instead ended on 29 July 2020.

The 2019–20 season, was SønderjyskE's 19th season as a professional football club and their 11th consecutive season in the Superliga, the top-flight of Danish football. In addition to the domestic league, the club competed in the Danish Cup.

The 2021–22 FC Midtjylland season is FC Midtjylland's 23rd season of existence, and their 21st consecutive season in the Danish Superliga, the top tier of football in Denmark. As a result of the club's runner-up finish in 2020–21, it qualified for the 2021–22 UEFA Champions League, and will also compete for the 2021–22 Danish Cup.