The Danish Superliga (Danish : Superligaen, pronounced  [ˈsuˀpɐliːˌkɛˀn̩] ) is the current Danish football championship tournament, and administered by the Danish Football Association. It is the highest football league in Denmark and is currently contested by 12 teams each year, with two teams relegated.

Founded in 1991, the Danish Superliga replaced the Danish 1st Division as the highest league of football in Denmark. From the start in 1991, 10 teams were participating. The opening Superliga season was played during the spring of 1991, with the ten teams playing each other twice for the championship title. From the summer of 1991, the tournament structure would stretch over two calendar years. The 10 teams would play each other twice in the first half of the tournament. In the following spring, the bottom two teams would be cut off, the points of the teams would be cut in half, and the remaining eight teams would once more play each other twice, for a total of 32 games in a season.

This practice was abandoned before the 1995–96 season, when the number of teams competing was increased to 12, playing each other thrice for 33 games per Superliga season. For the first season of this new structure, Coca-Cola became the name sponsor of the league, which was then named Coca-Cola Ligaen. After a single season under that name, Faxe Brewery became sponsors and the league changed its name to Faxe Kondi Ligaen. Before the 2001–02 season, Scandinavian Airlines System (SAS) became the head sponsor, and the name of the tournament changed to SAS Ligaen. From January 2015 the Danish Superliga is known as Alka Superliga, as the Danish insurance company Alka became name sponsor. [1]

Logos used for naming rights agreements for the league:

From 1996 through 2016, the league included 12 clubs which played each other three times. The two teams with the fewest points at the end of the season were relegated to the Danish 1st Division and replaced by the top two teams of that division. During this era, each team played every other team at least once at home and once away plus once more either at home or away. The top six teams of the previous season played 17 matches at home and 16 away while the teams in 7th to 10th place plus the two newly promoted teams played 16 matches at home and 17 away.

Following the 2015–16 season, the league was expanded to 14 teams, accomplished by relegating only the last-place finisher in that season and promoting the top three teams from the 1st division. The 2016–17 season was the first for the new league structure. It began with the teams playing a full home-and-away schedule, resulting in 26 matches for each team. At that time, the league split into a six-team championship playoff and an eight-team qualifying playoff. All teams' table points and goals carry over fully into the playoffs.

In the championship playoff, each team plays the others home and away again. The top team at the end of the playoff is Superliga champion and enters the Champions League in the second qualifying round. The second-place team enters the Europa League in the first qualifying round. The third-place team advances to a one-off playoff match for another Europa League place. If the winner of the Danish Cup finishes in the top three, the match will instead involve the fourth-place team.

The qualifying playoff is split into two groups, with the teams that finished the regular season in 7th, 10th, 11th, and 14th in one group and those finishing 8th, 9th, 12th, and 13th in the other. Each group plays home-and-away within its group. The top two teams from each group then enter a knockout tournament, with each match over two legs. If the Danish Cup winner is among the top two finishers in either playoff group, it is withdrawn from the knockout playoff and its opponent automatically advances to the tournament final. The winner of that tournament faces the third-place (or fourth-place) team from the championship playoff in a one-off match, with the winner entering the Europa League in the first qualifying round.

The bottom two teams from each group then contest a relegation playoff with several steps, centered on a separate four-team knockout playoff, also consisting totally of two-legged matches:

Following the 2019–20 season, The number of teams was reduced from 14 to 12 teams. It began with all 12 teams playing a full home-and-away schedule, resulting in 22 matches for each team. At that time, the league split into a six-team championship playoff and a six-team qualifying playoff. All teams' table points and goals carry over fully into the playoffs. In both playoff groups 6 Teams will playing a full home-and-away schedule, resulting in 10 matches (32 for the full season). The 2 bottom teams in the qualifying playoff, will be relegated to 1st Division, while the team who finishing 7th will be playing against the lowest placed team from The Championship playoff, who failed to qualifying directly to European Football, a single match, to decide the final European spot from Denmark. The 10 most scoring players throughout the history of the Superliga. Latest update 22 July 2022.

Football Club Copenhagen, commonly known as FC København, FC Copenhagen, Copenhagen or simply FCK, is a professional Danish football club in Copenhagen, Denmark. FCK was founded in 1992 as a superstructure on top of Kjøbenhavns Boldklub and Boldklubben 1903.

The Danish Cup is the official "knockout" cup competition in Danish football, run by the Danish Football Association. The cup has been contested annually since 1955.

Aurelijus "Auri" Skarbalius is a Lithuanian professional football manager and former player, who started his career as a winger, but played mostly as either left- or right-sided full-back. He is the Global Director of Capelli Sport, the owner of his former club HB Køge.

Randers FC is a professional football club based in Randers, East Jutland, Denmark, that plays in the Danish Superliga, the top flight of the Danish football league system. Founded on 1 January 2003, the club builds upon the license of Randers Freja, a former three-time Danish Cup winning team. As of 2022 the club had won the Danish Cup twice in its history. Randers plays its matches at the 10,300-capacity Cepheus Park Randers.

The 2nd Division is a semi-professional association football league for men and the third division in Denmark. It is organised by the Divisionsforeningen on behalf of the Danish Football Association as part of the nation-wide Danmarksturneringen i fodbold (Herre-DM) and is positioned between the second-tier 1st Division and the fourth-tier Danish 3rd Division in the Danish football league system. Clubs in the league must meet certain criteria concerning appropriate facilities and finances. All of the 2nd Division clubs qualify for the proper rounds of the DBU Pokalen. The number of promoted and relegated clubs has fluctuated over the years. In the 2020–21 season two clubs were directly promoted to the 1st Division, while eight teams were relegated to the Denmark Series. From the 2021–22 season, it was changed to two promotion spots and two relegation spots.

The 2006–07 Danish Superliga season was the 17th season of the Danish Superliga league championship, which determined the winners of the Danish football championship. It was governed by the Danish Football Association. It took place from the first match on July 19, 2006 to the final match on May 27, 2007. The ending date was discussed to be postponed to mid-June, if the Danish under-21 national team missed qualification for the UEFA U-21 Championship 2007, as they did, but instead the date was moved from Pentecost Monday to Pentecost Sunday.

The Danish Women's League is a semi-professional top-flight league for women's football in Denmark. It is organised by the Danish Football Association (DBU) as part of the nation-wide Danmarksturneringen i kvindefodbold (Kvinde-DM) and is placed as the first division of the Danish football league system. Clubs in the league must meet certain criteria concerning appropriate facilities and finances. All of the league's clubs qualify for the proper rounds of the DBU KvindePokalen. The top teams of each season qualify for the UEFA Women's Champions League.

Thomas Korsgaard Mikkelsen is a Danish professional footballer who plays as a goalkeeper for Brøndby IF.

The 2019–20 Danish Superliga was the 30th season of the Danish Superliga. F.C. Copenhagen were the defending champions. The season started on 12 July 2019 and was scheduled to end in May 2020, before being suspended due to the COVID-19 pandemic. The season instead ended on 29 July 2020. 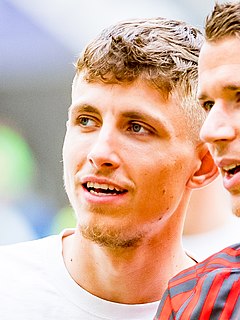 Jesper Grænge Lindstrøm, commonly known as Jobbe, is a Danish professional footballer who plays as a midfielder for Bundesliga club Eintracht Frankfurt and the Denmark national team.

2019–20 Brøndby IF season was Brøndby IF's 39th consecutive season in top-division of the Danish football league, the 30th consecutive in Danish Superliga, and the 54th as a football club. Besides the Superliga, the club competed in the 2019–20 Danish Cup and 2019–20 UEFA Europa League. It is the first season with head coach Niels Frederiksen, after replaced he caretaker manager Martin Retov.

The 2019–20 season, was SønderjyskE's 19th season as a professional football club and their 11th consecutive season in the Superliga, the top-flight of Danish football. In addition to the domestic league, the club competed in the Danish Cup.