The county council was established in 1889. The council's functions and territory were reformed under the Local Government Act 1972. The first election following those reforms was held in 1973, with the council assuming its altered powers on 1 April 1974. Political control of the council since 1973 has been held by the following parties:

Hampshire County Council (HCC) is an English council that governs eleven of the thirteen districts geographically located within the ceremonial county of Hampshire. As one of twenty-four county councils in England, it acts as the upper tier of local government to approximately 1.4 million people.

Cambridgeshire County Council is elected every four years using the first past the post system of election. As of 2021 the council consists of 61 council seats, representing 60 electoral divisions. The Conservative Party is currently the largest party bloc on the council.

Norfolk County Council in England is elected every four years. Since the last boundary changes, 84 councillors have been elected from 84 wards.

Dorset County Council was a non-metropolitan county in England. Elections were first held on 23 January 1889, thereafter elections were held every three years, with all members being elected by the first past the post system of election on the same day. Later, the cycle was changed to one election in every four years, and the last such election was in 2017. There were also occasional by-elections, the last of which took place in December 2016.

Plymouth City Council is the local authority for the a unitary authority of Plymouth in Devon, England. Until 1 April 1998 it was a non-metropolitan district. 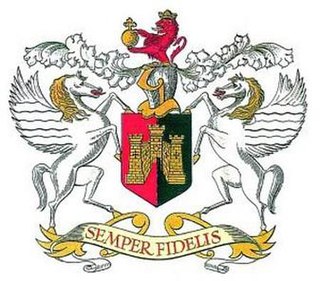 Gloucestershire County Council in England is elected every four years. Following last boundary changes in 2005, 63 councillors were elected from 53 divisions. The last election took place on 2 May 2013, when all divisions were reduced to single members.

Devon County Council is the county council administering the English county of Devon. Based in the city of Exeter, the council covers the non-metropolitan county area of Devon. Members of the council (councillors) are elected every four years to represent the electorate of each county division, almost all being nominated by the major national political parties.

Plymouth City Council is the unitary authority for Plymouth, Devon. It has traditionally been controlled by Labour or the Conservatives. The council is currently in a state of no overall control, with the Conservatives governing as a minority administration.

The 2012 Exeter City Council election took place on 3 May 2012, to elect members of Exeter City Council in Devon, England. The election was held concurrently with other local elections in England. One third of the council was up for election; the seats up for election were last contested in 2008. The Labour Party gained overall control of the council, which had been under no overall control since 2003. The Liberal Party was wiped off the council.

The 2011 Exeter City Council election took place on 5 May 2011, to elect members of Exeter City Council in Devon, England. The election was held concurrently with other local elections in England. One third of the council was up for election; the seats up for election were last contested in 2007. The council remained under no overall control with the Labour Party as the largest party.

The 2022 Exeter City Council election took place on 5 May 2022 to elect members to Exeter City Council in Devon, England. This was the same day as other local elections in the United Kingdom. 17 of the 39 seats were up for election, one councillor in each of the 13 wards, and 4 by-elections. These wards were last contested in 2018.

The 2022 Plymouth City Council election took place on 5 May 2022 to elect members of Plymouth City Council in England. It coincided with local elections across the United Kingdom. The Conservative Party made gains in the previous election in 2021, resulting in the council entering no overall control with no party holding a majority of seats. Immediately following the results of the 2022 election, the council remained in no overall control. Labour and the Conservatives gained seats from independent councillors who had left their parties, and exchanged seats with each other. The election saw the first Green Party councillor for the city elected, Ian Poyser, and the first trans councillor for the city elected, Dylan Tippetts of the Labour Party.

Penrhiw-ceibr is the name of an electoral ward in the Cynon Valley, Rhondda Cynon Taf, Wales. It's boundaries are coterminous with the village and community of Penrhiwceiber. The ward elects two councillors to Rhondda Cynon Taf County Borough Council.

Glanamman is the name of an electoral ward for Carmarthenshire County Council, in the Amman Valley, Carmarthenshire, Wales. It is represented by one county councillor.