In 1970 Rick Loomis invented a game called Nuclear Destruction , a play-by-mail game, for which he moderated multiplayer games. [1] :34Nuclear Destruction is widely considered to be the first commercial play-by-mail (PBM) game. He soon had more than 200 players in multiple games, and asked fellow soldier Steve MacGregor to write a computer program to moderate the games; they began renting time on a computer near Fort Shafter, using the name Flying Buffalo devised by Loomis. [1] :34 [2] After leaving the military in 1972, Loomis and MacGregor incorporated their PBM company as Flying Buffalo, Inc., or FBI. [1] :34 Loomis and MacGregor pooled their savings to purchase a Raytheon 704 minicomputer to run PBM turns. [1] :35 In 1976 the company started running a space exploration/conquest PBM game titled Starweb .

Flying Buffalo has also published games outside of PBM. Loomis acquired Nuclear War and began publishing it in 1972; it soon became one of Flying Buffalo's best sellers. [1] :35 In 1975 they published Tunnels & Trolls , a fantasy role playing game generally similar to Dungeons & Dragons . Later products included background materials for fantasy role playing games, which became the "Catalyst" series. They also produce a range of unusual dice, such as a set to determine which toppings to order on pizza, and currently hold the printing rights to the Ace of Aces and Lost Worlds flip book systems. The company also ran a gaming store at various locations in Tempe, Arizona until 1985.

In 1992, the fiction book Mage's Blood and Old Bones: A Tunnels & Trolls Shared World Anthology was published by Flying Buffalo. [3] Following the dissolution of TSR in 1997, Flying Buffalo remains the oldest pen-and-paper role-playing game publisher in the world. [4] :115

The Origins Hall of Fame award is given to game designers who have the best contributions of their field. Multiple Flying Buffalo writers and designers have won this award. 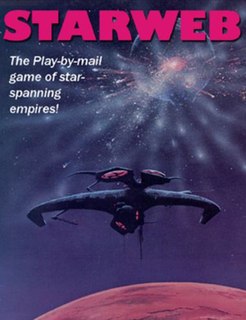 A play-by-mail game is a game played through postal mail, email or other digital media. Correspondence chess and Go were among the first PBM games. Diplomacy has been played by mail since 1963, introducing a multi-player aspect to PBM games. Flying Buffalo Inc. pioneered the first commercially available PBM game in 1970. A small number of PBM companies followed in the 1970s, with an explosion of hundreds of startup PBM companies in the 1980s at the peak of PBM gaming popularity, many of them small hobby companies—more than 90 percent of which eventually folded. A number of independent PBM magazines also started in the 1980s, including Flagship magazine, Gaming Universal, and Paper Mayhem. These magazines eventually went out of print, replaced in the 21st century by the online PBM journal Suspense and Decision.

Illuminati is a card game made by Steve Jackson Games (SJG), inspired by the 1975 book, The Illuminatus! Trilogy, by Robert Anton Wilson and Robert Shea. The game has ominous secret societies competing with each other to control the world through various means, including legal, illegal, and even mystical. It was designed as a "tongue-in-cheek rather than serious" take on conspiracy theories. It contains groups named similarly to real world organizations, such as the Society for Creative Anachronism and the Symbionese Liberation Army. It can be played by two to eight players. Depending on the number of players, a game can take between one and six hours. 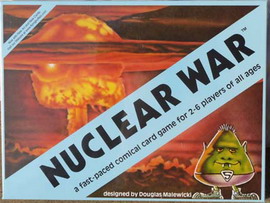 Nuclear War is a collectible common-deck card game designed by Douglas Malewicki, and originally published in 1965. It is currently published by Flying Buffalo, and has inspired several expansions. It is a satirical simulation of an end-of-the-world scenario fought mostly with nuclear weapons.

The Origins Awards are American awards for outstanding work in the game industry. They are presented by the Academy of Adventure Gaming Arts and Design at the Origins Game Fair on an annual basis for the previous year, so the 1979 awards were given at the 1980 Origins.

Game Designers' Workshop (GDW) was a wargame and role-playing game publisher from 1973 to 1996. Many of their games are now carried by other publishers.

Ace of Aces is a two-player combat picture book game designed by Alfred Leonardi and first published in 1980 by Nova Game Designs.

Starweb is a play-by-mail game of strategy and diplomacy invented in 1976 by Rick Loomis. It is likely the longest lived play-by-mail game that started life in that medium. It remains a popular game at Flying Buffalo.

Catalyst is a series of fantasy role-playing game supplements created by Flying Buffalo as a series of game aides that could be used with any medieval fantasy-themed role-playing game system. The first supplement, Grimtooth's Traps, was released in 1981. Numerous other Catalyst books were produced, including the Citybook series, seven Traps books, Treasure Vault, and the Lejentia campaign setting. The latest, City of the Gods Map Pack was produced in 2011.

Elizabeth T. Danforth is an illustrator, editor, writer, and scenario designer for role-playing games and video games. She received her BA in Anthropology from Arizona State University, and her MLS from the University of Arizona. She has worked in the game industry continuously since the mid 1970s.

Middle-Earth Play-By-Mail, or Middle-earth PBM for short, is a turn-based, strategy play by email and play-by-mail game set in the world of J.R.R. Tolkien’s The Lord of the Rings and The Hobbit, including elements from ICE's Middle-earth Role Playing under licence from GSIL. The game is now run as Middle-earth Strategic Gaming by Middle-earth Games, Ltd.

Steven S. Crompton is a Canadian-born artist, author and designer who has worked in the role-playing and comic genres since 1981. In the gaming industry he is best known as the artist for the Grimtooth Traps books as well as other Catalyst role-playing game supplements, Tunnels & Trolls and the Nuclear War card game.

Rick Loomis was an American game designer, most notable as the founder of game publisher Flying Buffalo, which he managed until his death.

Heroic Fantasy is a dungeon crawl play-by-mail game published by Flying Buffalo. It has been active since 1982. The initial edition involved nine dungeon levels. Flying Buffalo published subsequent editions due to challenging gameplay initially, eventually limiting the game to four dungeon levels with a fifth "outside" level where players can assemble an army and capture one or more castles. The game is open-ended; gameplay continues until players decide to stop.

Hyborian War is a play-by-mail game published by Reality Simulations, Inc. It takes place during the Hyborian Age in the world of Conan the Barbarian created by Robert E. Howard. The game has been continuously available for worldwide play since its inception in 1985 and has changed little in its overall format. It uses a computer program to adjudicate player orders. Although it relies on postal mail or email and has turnaround times which are relatively long for the digital age of video games, Hyborian War has remained active into the 21st century.

Illuminati is a play-by-mail game published by Flying Buffalo Inc. It is based on the Illuminati card game by Steve Jackson Games. It was originally owned by Adventure Systems but transitioned to Flying Buffalo Inc in 1986. The game's central focus is on conspiracy and intrigue and today involves 24 players playing either by email or by mail in turns processed simultaneously by computer. Illuminati has won the Origins Award for Best Play-By-Mail Game seven times, once in 1985 and six times in the 1990s, and was inducted into the Origins Hall of Fame in 1997.

Monster Island is a play-by-mail (PBM) role-playing game. It was initially published by Adventures By Mail in Cohoes, New York. Jack Everitt, the game designer, came up with the idea for the game in 1985. The game, which was open-ended and computer moderated, was active by 1989, expanded rapidly in North America, and within a few years had spread to Great Britain and Germany. By 1997 it was one of the longest-running PBM games. The game is currently moderated by the UK-based KJC Games.

Nuclear Destruction is a play-by-mail (PBM) game. It was published by Rick Loomis of Flying Buffalo Inc. in 1970. It was the first professional PBM game.