The following is a list of modern Russian small arms and light weapons which were in service in 2016:

The AK-47, officially known as the Avtomat Kalashnikova, is a gas-operated assault rifle that is chambered for the 7.62×39mm cartridge. Developed in the Soviet Union by Russian small-arms designer Mikhail Kalashnikov, it is the originating firearm of the Kalashnikov family of rifles. After more than seven decades, the AK-47 model and its variants remain the most popular and widely used rifles in the world.

In the early 1970s the Soviet weapons-designer Mikhail Kalashnikov developed the AK-74 as an assault rifle to replace the earlier AKM. It uses a smaller 5.45×39mm cartridge, replacing the 7.62×39mm chambering of earlier Kalashnikov-pattern weapons.

Degtyaryov Plant or ZiD is one of the most important weapon and vehicle producing enterprises of Russia.

JSC Kalashnikov Concern, known until 2013 as the Izhevsk Machine-Building Plant, is a Russian defense manufacturing concern and joint-stock company headquartered in the city of Izhevsk in the Republic of Udmurtia as well as the capital city of Moscow. The concern designs and produces a wide range of civilian and military weapons including assault rifles, sniper rifles, designated marksman rifles, machine guns, squad automatic weapons, hunting rifles, shotguns, guided artillery projectiles, and a wide range of other precision weapons including remote controlled weapon stations, unmanned vehicles and military robots.

The RPK is a Soviet 7.62×39mm light machine gun, developed by Mikhail Kalashnikov in the early 1960s, in parallel with the AKM assault rifle. It was created to standardize the small arms inventory of the Soviet Army, where it replaced the 7.62×39mm RPD light machine gun. The RPK continues to be used by the armed forces of countries of the former Soviet Union and certain African and Asian nations. The RPK is also manufactured in Bulgaria, Romania and Serbia. 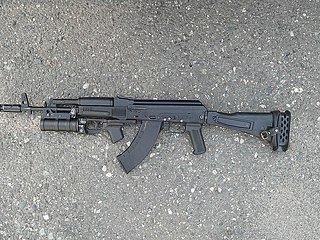 The AK-103 is an assault rifle designed by Russian small arms designer Mikhail Kalashnikov in 1994. It is an AK-100 derivative of the AK-74M similar to the AKM. The AK-103 can be fitted with a variety of sights, including night vision and telescopic sights, plus a knife-bayonet or a grenade launcher like the GP-34. Newer versions can fit Picatinny rails allowing more accessories to be mounted. It uses plastic components where possible instead of wood or metal, with such components being the pistol grip, handguards, stock and depending on the type, the magazine.

The Type 81 is a Chinese-designed second-generation, selective-fire, gas-operated 7.62×39mm rifle adopted by the Chinese People's Liberation Army (PLA) and has been in service since the mid-1980s.

INSAS is a family of infantry arms consisting of an assault rifle and a light machine gun (LMG). It is manufactured by the Ordnance Factories Board at Ordnance Factory Tiruchirappalli, Small Arms Factory Kanpur and Ishapore Arsenal. The INSAS assault rifle was the standard infantry weapon of the Indian Armed Forces.

The AEK-971 is a selective fire 5.45×39mm assault rifle that was developed at the Kovrov Mechanical Plant (KMZ) by chief designer Sergey Koksharov in the late 1970s and 1980s.

The KSVK or Degtyarev sniper rifle is a 12.7mm anti-materiel rifle developed in Russia for the purpose of counter sniping and penetrating thick walls, as well as light armored vehicles. 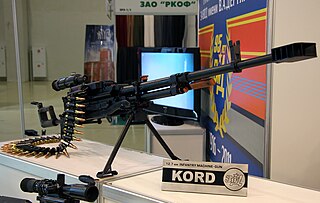 The Kord-12.7 mm heavy machine gun is a Russian design that entered service in 1998 replacing the older NSV machine gun. Externally the weapon resembles the NSV; however, the internal mechanism has been extensively reworked, changing from a horizontally pivoting breech block to a rotating bolt design. Additionally the gas system has been changed and the muzzle baffle redesigned. These changes give the weapon reduced recoil compared with the NSV, allowing greater accuracy during sustained fire.

A Kalashnikov (Калашников) rifle is any one of a series of automatic rifles based on the original design of Mikhail Kalashnikov. They are officially known in Russian as "Avtomát Kaláshnikova", but are widely known as Kalashnikovs, AKs, or in Russian slang, a "Kalash". They were originally manufactured in the Soviet Union, primarily by Kalashnikov Concern, formerly Izhmash, but these rifles and their variants are now manufactured in many other countries. The Kalashnikov is one of the most widely-used guns in the world, with an estimated 72 million rifles in global circulation.

An assault rifle is a selective-fire rifle that uses an intermediate cartridge and a detachable magazine. Assault rifles were first put into mass production and accepted into widespread service during World War II. The first assault rifle to see major usage was the German StG 44, a development of the earlier Mkb 42. While immediately after World War II, NATO countries were equipped with battle rifles, the development of the M16 rifle during the Vietnam War prompted the adoption of assault rifles by the rest of NATO. By the end of the 20th century, assault rifles had become the standard weapon in most of the world's armies, replacing full-powered rifles and sub-machine guns in most roles. Some of the most successful assault rifles include the AK-47, M16, IMI Galil and Heckler & Koch G36.

The AN-94 is a Russian assault rifle. The initials stand for Avtomat Nikonova model of 1994, after its chief designer Gennadiy Nikonov, who previously worked on the Nikonov machine gun.

The AK-12 is a Russian assault rifle chambered in 5.45×39mm designed and manufactured by the Kalashnikov Concern, making it the fifth generation of Kalashnikov rifles.

Project Abakan was a Soviet/Russian advanced assault rifle program in rival to the US Advanced Combat Rifle that took place between 1980 and 1994.

The IWI Galil ACE is a series of assault rifles and battle rifles developed and manufactured by Israel Military Industries. It is also produced under license by Indumil, FAMAE, RPC Fort and Z111 Factory. It is mainly produced in three different calibres: 5.56×45mm NATO, 7.62×39mm and 7.62×51mm NATO. IWI USA produced limited edition variants of the ACE in 5.45×39mm in 2020.

AVB-7.62 is a battle rifle designed by Anatoly F. Baryshev that is derived from his weapon operating system. It is characterized by significantly reduced recoil.