Malampa is one of the six provinces of Vanuatu, located in the center of the country. It consists of three main islands: Malakula, Ambrym and Paama, and takes its name from the first syllable of their names. It includes a number of other islands – the small islands of Uripiv, Norsup, Rano, Wala, Atchin and Vao off the coast of Malakula, and the volcanic island of Lopevi (currently uninhabited). Also included are the Maskelynes Islands and some more small islands along the south coast of Malakula.

Victoria Island is a large island in the Arctic Archipelago that straddles the boundary between Nunavut and the Northwest Territories of Canada. It is the eighth largest island in the world, and at 217,291 km2 (83,897 sq mi) in area, it is Canada's second largest island. It is nearly double the size of Newfoundland (111,390 km2 [43,008 sq mi]), and is slightly larger than the island of Great Britain (209,331 km2 [80,823 sq mi]) but smaller than Honshu (225,800 km2 [87,182 sq mi]). It contains the world's largest island within an island within an island. The western third of the island lies in the Inuvik Region of the Northwest Territories; the remainder is part of Nunavut's Kitikmeot Region. 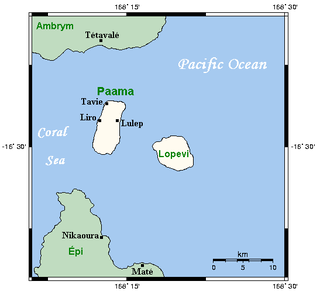 Tomman Island is a small island in Vanuatu, just off the southwest coast of Malakula. 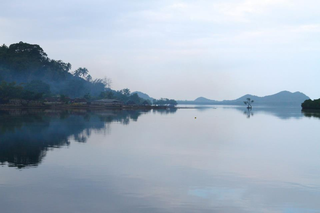 Akhamb Island is a small island in Vanuatu, just off the southcoast of Malakula.

Atchin is an islet off the north-eastern coast of Malakula in Vanuatu. The 1999 census showed a population of 761, which had decreased to 738 by 2009.

Uri is a small island located near Malakula, in the Malampa Province of the country Vanuatu.

Awei is a small uninhabited island in Malampa Province of Vanuatu in the Pacific Ocean. It is a part of the Maskelyne Islands archipelago.