The Atchin language is spoken on the island.

Nale may refer to: 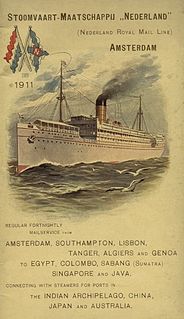 The Stoomvaart Maatschappij Nederland or SMN, also known as the Netherland Line or Nederland Line, was a Dutch shipping line that operated from 1870 until 1970, when it merged with several other companies to form what would become Royal Nedlloyd.

Lomokankro is a town in central Ivory Coast. It is a sub-prefecture of Tiébissou Department in Bélier Region, Lacs District. 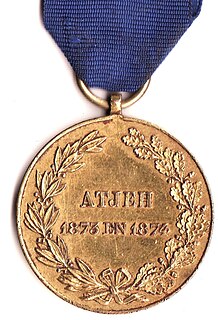 The Aceh Medal was founded by King William III of the Netherlands on May 12, 1874, in a royal decree. The medal was presented to troops participating in the First Aceh Expedition and the Second Aceh Expedition.

Sultan Alauddin Muhammad Da'ud Syah I was the thirty-first sultan of Aceh in northern Sumatra. He was the sixth ruler of the Bugis Dynasty and reigned from 1823 to 1838.

Sultan Alauddin Ibrahim Mansur Syah, also known as Ali Alauddin Mansur Syah was the thirty-third sultan of Aceh in northern Sumatra. He was the eight ruler of the Bugis Dynasty and ruled de facto from 1838, formally from 1857 to 1870.

HNLMS Djambi, was the lead ship of the Djambi-class, built for the Royal Netherlands Navy from the late 1850's. She was in the 1864 Shimonoseki affair and in the 1873 First Aceh Expedition. She became unfit for service after serving for only 13 years.

Lela or lila is a type of Malay cannon, used widely in the Nusantara archipelago. They are similar to a lantaka but longer and had larger bore. Lela can be configured as swivel gun, fixed gun, or mounted in a gun carriage. It is the equivalent of European falcon and falconet.