Iririki is a privately leased island, located in Mele Bay, near Port Vila, the Capital of Vanuatu. The whole island is owned and operated by Australian businessmen Shane Pettiona, Darren Pettiona and Peter Stockley.

Iririki Island Resort continues to operate as a resort.

Iririki Island is the traditional land of Ifira Islanders.

Bislama is spoken by everyone as the day-to-day language. In addition, English and French are also widespread. Other Indigenous languages are also spoken in the city.

Port Vila has a tropical climate, with little variance in temperature throughout the year. Temperatures can reach a high of 93.2 °F (34.0 °C), with an average low of 84.2 °F (29.0 °C). The region also enjoys south east trade winds. November to February are generally quite warm and a little humid, with April to October providing perfect weather conditions. With warm ocean temperatures ideal for all water sports.

The 2002–03 South Pacific cyclone season was the most active and longest tropical cyclone season since 1997–98, with ten tropical cyclones occurring within the South Pacific basin between 160°E and 120°W. The season started earlier than normal, with two systems developing before the official start of the season on November 1, 2002, while the final system dissipated on June 9, 2003, after the season had officially ended on April 30. During the season, tropical cyclones were officially monitored by the Regional Specialized Meteorological Centre (RSMC) in Nadi, Fiji and the Tropical Cyclone Warning Centres in Brisbane, Australia and Wellington, New Zealand. The United States Armed Forces through the Joint Typhoon Warning Center (JTWC), also monitored the basin and issued unofficial warnings for American interests. RSMC Nadi attaches a number and an F suffix to tropical disturbances that occur within the basin, while the JTWC designates significant tropical cyclones with a number and a P suffix. RSMC Nadi, TCWC Wellington and TCWC Brisbane all use the Australian Tropical Cyclone Intensity Scale and estimate windspeeds over a ten-minute period, while the JTWC estimates sustained winds over a one-minute period, which are subsequently compared to the Saffir–Simpson Hurricane Scale (SSHS). 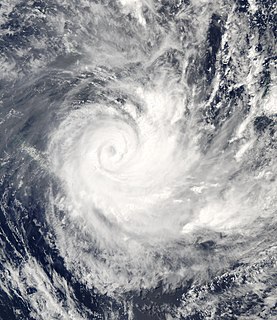 Severe Tropical Cyclone Ivy was a tropical cyclone that affected about 25% of the population of Vanuatu in February 2004. It was first classified as a tropical disturbance on February 21 between Vanuatu and Fiji. The system tracked northwestward, gradually organizing and intensifying. After attaining tropical storm status on February 23, Ivy strengthened more quickly as it turned southwestward toward Vanuatu. It attained peak winds of 165 km/h (105 mph) while moving over Vanuatu, making it an intense Category 4 cyclone on the Australian Region Tropical Cyclone Intensity Scale. By the time it passed through Vanuatu, Ivy had turned southeastward, and it gradually weakened while accelerating. After becoming extratropical on February 28, it passed just east of New Zealand and eventually dissipated on March 2. 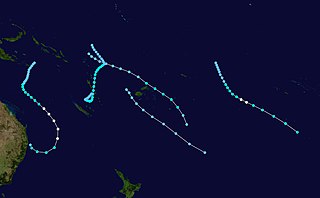 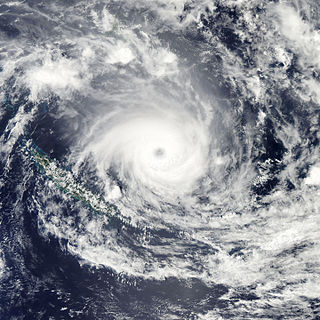 Severe Tropical Cyclone Jasmine was a powerful and long-lived annular tropical cyclone that affected several countries, particularly Vanuatu and Tonga, over a 16-day span in February 2012. The system was the second cyclone and the only severe tropical cyclone of the relatively quiet 2011–12 South Pacific cyclone season. Cyclone Jasmine developed from an area of disturbed weather on 1 February in the Gulf of Carpentaria. Initially, the storm moved towards the east and across the Cape York Peninsula. As it moved across the South Pacific, earlier existing wind shear conditions lessened, and Jasmine began to strengthen at a faster rate. Steadily intensifying, Jasmine reached peak intensity on 8 February as a Category 4 equivalent on the Saffir–Simpson Hurricane Scale, while beginning to show annular characteristics.

Severe Tropical Cyclone Pam was tied with Cyclone Yasa in 2020 as the second most intense tropical cyclone of the South Pacific Ocean in terms of sustained winds and is regarded as one of the worst natural disasters in the history of Vanuatu. A total of 15–16 people lost their lives either directly or indirectly as a result of Pam with many others injured. The storm's impacts were also felt, albeit to a lesser extent, to other islands in the South Pacific, most notably the Solomon Islands, Tuvalu, and New Zealand. Pam is the third most intense storm of the South Pacific Ocean according to pressure, after Winston of 2016 and Zoe of 2002. It is also the second most intense tropical cyclone in 2015, only behind Hurricane Patricia. In addition, Pam is tied with Orson, Monica, Marcus, Fantala and Yasa for having the second strongest ten-minute maximum sustained winds in the Southern Hemisphere. Thousands of homes, schools and buildings were damaged or destroyed, with an estimated 3,300 people displaced as a result.

Severe Tropical Cyclone Beni was an intense tropical cyclone that affected four countries, on its 18-day journey across the South Pacific Ocean during January and February 2003. The system originally developed during 19 January as a weak tropical disturbance within the monsoon trough, to the northeast of the Santa Cruz Islands. Over the next few days the system gradually developed further before it was classified as a tropical cyclone and named Beni during 24 January.

Severe Tropical Cyclone Yali was one of seven severe tropical cyclones to develop during the 1997–98 South Pacific cyclone season. The system that was to become Yali was first noted as a tropical disturbance, to the northeast of Vanuatu during March 17. Over the next couple of days, the system moved towards the south-west and gradually developed further, before it was named Yali during March 19, after it had developed into a tropical cyclone. After it was named Yali re-curved and started moving towards the south-southeast, as the monsoonal flow to the north of the system strengthened. While the system was active, Yali affected Vanuatu and New Caledonia before the extra-tropical remnants impacted New Zealand where a man was killed and widespread power outages and damage were reported.

Severe Tropical Cyclone Paula was a tropical cyclone which caused extensive damage to areas of Vanuatu. The cyclone was the second cyclone and only severe tropical cyclone of the relatively inactive 2000–01 South Pacific cyclone season. Cyclone Paula developed from an area of disturbed weather embedded within a monsoon trough on February 25, 2001, near Vanuatu. Situated in an area of favorable conditions, Paula steadily intensified as it moved in a general direction towards the southeast. On March 1, Paula reached peak intensity with winds of 175 km/h (109 mph), sustained for ten minutes. However, the cyclone began to accelerate further to the southeast into more unfavorable conditions. As a result, Paula quickly weakened, and thus degenerated into an extratropical cyclone on March 4.

Severe Tropical Cyclone Esau was the strongest tropical cyclone to affect New Caledonia on record. A shallow tropical depression developed within the monsoon trough during 24 February, about 370 km (230 mi) to the northeast of Port Vila, Vanuatu. Over the next day, the system gradually developed further as it moved towards the south-west under the influence of a northerly steering flow, before it passed over Pentecost Island in northern Vanuatu during 25 February. After passing over Pentecost the system continued to move towards the southwest and passed near the island of Malampa before the depression turned northwards and executed a small clockwise loop as it passed over the island of Espiritu Santo. The system was subsequently named Esau during 26 February, after it had developed into a tropical cyclone. Over the next couple of days, the system moved south-westwards towards Australia and away from the islands of Vanuatu. Esau subsequently executed a second clockwise loop during 28 February, before it peaked as a Category 4 tropical cyclone on both the Australian tropical cyclone intensity scale and the Saffir-Simpson hurricane wind scale. After it had peaked the system moved south-eastwards and threatened Southern Vanuatu, before turning southwards and threatening the French overseas territory of New Caledonia. Esau made landfall on the French territory during 4 March, as a category 3 severe tropical cyclone before degenerating into an extratropical cyclone during 5 March. The systems remnants made landfall on New Zealand's North Island during 8 March, before they were last noted during the next day over the South Pacific Ocean. 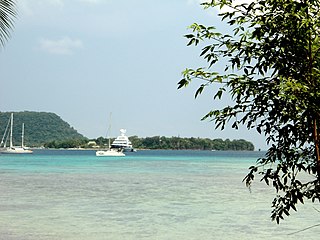