The tailplane comprises the tail-mounted fixed horizontal stabiliser and movable elevator. Besides its planform, it is characterised by:

Some locations have been given special names:

A wing with a conventional aerofoil profile makes a negative contribution to longitudinal stability. This means that any disturbance (such as a gust) which raises the nose produces a nose-up pitching moment which tends to raise the nose further. With the same disturbance, the presence of a tailplane produces a restoring nose-down pitching moment, which may counteract the natural instability of the wing and make the aircraft longitudinally stable (in much the same way a weather vane always points into the wind).

The longitudinal stability of an aircraft may change when it is flown "hands-off"; i.e. when the flight controls are subject to aerodynamic forces but not pilot input forces.

In addition to giving a restoring force (which on its own would cause oscillatory motion) a tailplane gives damping. This is caused by the relative wind seen by the tail as the aircraft rotates around the centre of gravity. For example, when the aircraft is oscillating, but is momentarily aligned with the overall vehicle's motion, the tailplane still sees a relative wind that is opposing the oscillation.

Depending on the aircraft design and flight regime, its tailplane may create positive lift or negative lift (downforce). It is sometimes assumed that on a stable aircraft this will always be a net down force, but this is untrue. [2]

On some pioneer designs, such as the Bleriot XI, the centre of gravity was between the neutral point and the tailplane, which also provided positive lift. However this arrangement can be unstable and these designs often had severe handling issues. The requirements for stability were not understood until shortly before World War I - the era within which the British Bristol Scout light biplane was designed for civilian use, with an airfoiled lifting tail throughout its production run into the early World War I years and British military service from 1914-1916 — when it was realised that moving the centre of gravity further forwards allowed the use of a non-lifting tailplane in which the lift is nominally neither positive nor negative but zero, which leads to more stable behaviour. [3] Later examples of aircraft from World War I and onwards into the interwar years that had positive lift tailplanes include, chronologically, the Sopwith Camel, Charles Lindbergh's Spirit of St. Louis, the Gee Bee Model R Racer - all aircraft with a reputation for being difficult to fly, and the easier-to-fly Fleet Finch two-seat Canadian trainer biplane, itself possessing a flat-bottom airfoiled tailplane unit not unlike the earlier Bristol Scout. But with care a lifting tailplane can be made stable. An example is provided by the Bachem Ba 349 Natter VTOL rocket-powered interceptor, which had a lifting tail and was both stable and controllable in flight. [4]

In many modern conventional aircraft, the centre of gravity is placed ahead of the neutral point.[ citation needed ] The wing lift then exerts a pitch-down moment around the centre of gravity, which must be balanced by a pitch-up moment (implying negative lift) from the tailplane. A disadvantage is that it generates trim drag.

Using a computer to control the elevator allows aerodynamically unstable aircraft to be flown in the same manner.

Aircraft such as the F-16 are flown with artificial stability. The advantage of this is a significant reduction in drag caused by the tailplane, and improved maneuverability.

At transonic speeds, an aircraft can experience a shift rearwards in the center of pressure due to the buildup and movement of shockwaves. This causes a nose-down pitching moment called Mach tuck. Significant trim force may be needed to maintain equilibrium, and this is most often provided using the whole tailplane in the form of an all-flying tailplane or stabilator.

Elevator A conventional tailplane normally has a hinged aft surface called an elevator,

Stabilator or all-moving tail In transonic flight shock waves generated by the front of the tailplane render any elevator unusable. An all-moving tail was developed by the British for the Miles M.52, but first saw actual transonic flight on the Bell X-1; Bell Aircraft Corporation had included an elevator trim device that could alter the angle of attack of the entire tailplane. This saved the program from a costly and time-consuming rebuild of the aircraft.[ citation needed ]

Transonic and supersonic aircraft now have all-moving tailplanes to counteract Mach tuck and maintain maneuverability when flying faster than the critical Mach number. Normally called a stabilator, this configuration is often referred to as an "all-moving" or "all-flying" tailplane.

The delta wing is a wing shaped in the form of a triangle. It is named for its similarity in shape to the Greek uppercase letter delta (Δ). 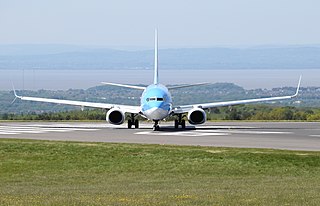 Elevons or tailerons are aircraft control surfaces that combine the functions of the elevator and the aileron, hence the name. They are frequently used on tailless aircraft such as flying wings. An elevon that is not part of the main wing, but instead is a separate tail surface, is a stabilator. The word "elevon" is a portmanteau of elevator and aileron.

Elevators are flight control surfaces, usually at the rear of an aircraft, which control the aircraft's pitch, and therefore the angle of attack and the lift of the wing. The elevators are usually hinged to the tailplane or horizontal stabilizer. They may be the only pitch control surface present, and are sometimes located at the front of the aircraft or integrated into a rear "all-moving tailplane", also called a slab elevator or stabilator. 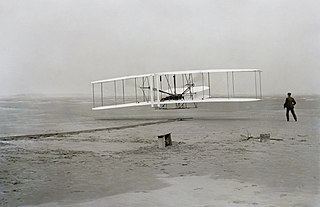 In an aircraft with a pusher configuration, the propeller(s) are mounted behind their respective engine(s). According to British aviation author Bill Gunston, a "pusher propeller" is one mounted behind the engine, so that the drive shaft is in compression. 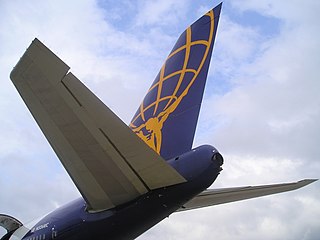 The empennage, also known as the tail or tail assembly, is a structure at the rear of an aircraft that provides stability during flight, in a way similar to the feathers on an arrow. The term derives from the French language word empenner which means "to feather an arrow". Most aircraft feature an empennage incorporating vertical and horizontal stabilising surfaces which stabilise the flight dynamics of yaw and pitch, as well as housing control surfaces.

Flight mechanics are relevant to fixed wing and rotary wing (helicopters) aircraft. An aeroplane, is defined in ICAO Document 9110 as, "a power-driven heavier than air aircraft, deriving its lift chiefly from aerodynamic reactions on surface which remain fixed under given conditions of flight". 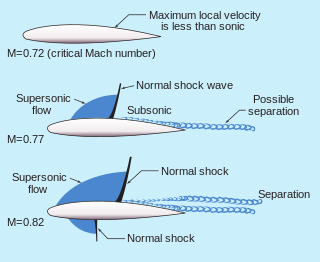 Mach tuck is an aerodynamic effect whereby the nose of an aircraft tends to pitch downward as the airflow around the wing reaches supersonic speeds. This diving tendency is also known as "tuck under". The aircraft will first experience this effect at significantly below Mach 1. 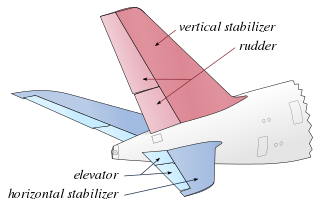 An aircraft stabilizer is an aerodynamic surface, typically including one or more movable control surfaces, that provides longitudinal (pitch) and/or directional (yaw) stability and control. A stabilizer can feature a fixed or adjustable structure on which any movable control surfaces are hinged, or it can itself be a fully movable surface such as a stabilator. Depending on the context, "stabilizer" may sometimes describe only the front part of the overall surface. 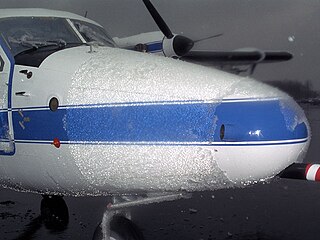 Ice protection systems are designed to keep atmospheric ice from accumulating on aircraft surfaces, such as wings, propellers, rotor blades, engine intakes, and environmental control intakes. If ice is allowed to build up to a significant thickness it can change the shape of airfoils and flight control surfaces, degrading the performance, control or handling characteristics of the aircraft. An ice protection system either prevents formation of ice, or enables the aircraft to shed the ice before it can grow to a dangerous thickness.

A canard is an aeronautical arrangement wherein a small forewing or foreplane is placed forward of the main wing of a fixed-wing aircraft. The term "canard" may be used to describe the aircraft itself, the wing configuration, or the foreplane.

A tailless aircraft has no tail assembly and no other horizontal surface besides its main wing. The aerodynamic control and stabilisation functions in both pitch and roll are incorporated into the main wing. A tailless type may still have a conventional vertical fin and rudder.

In flight dynamics, longitudinal static stability is the stability of an aircraft in the longitudinal, or pitching, plane under steady flight conditions. This characteristic is important in determining whether a human pilot will be able to control the aircraft in the pitching plane without requiring excessive attention or excessive strength.

Supermaneuverability is the capability of fighter aircraft to execute tactical maneuvers that are not possible with purely aerodynamic mechanisms. Such maneuvers can use controlled side-slipping and angles of attack beyond maximum lift. 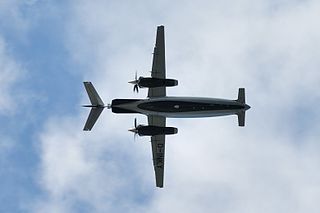 A three-surface aircraft or sometimes three-lifting-surface aircraft has a foreplane, a central wing and a tailplane. The central wing surface always provides lift and is usually the largest, while the functions of the fore and aft planes may vary between types and may include lift, control and/or stability.