Lyme is a town in Jefferson County, New York, United States. The population was 2,185 at the 2010 census.

Chaumont is a village in Jefferson County, New York, in the United States. Its population was 624 at the 2010 census. The village is named for Jacques-Donatien Le Ray de Chaumont, son of Benjamin Franklin's landlord and friend at Passy in France. The village of Chaumont is in the town of Lyme and is northwest of Watertown. 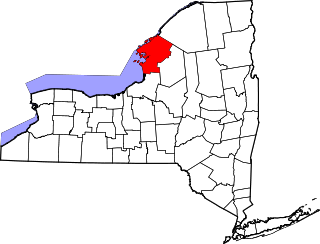 Jefferson County is a county in the U.S. state of New York. As of the 2010 census, the population was 116,229. Its county seat is Watertown. The county is named after Thomas Jefferson, third President of the United States of America. It is adjacent to Lake Ontario, southeast from the Canada–US border of Ontario.

It was listed on the National Register of Historic Places in 1990. [1]

Douglaston Historic District is a national historic district in Douglaston, Queens, New York. It includes 631 contributing buildings and three contributing sites on a mile-long peninsula extending into Little Neck Bay. All but one of the buildings are in residential use and the majority were built in the early- to mid-20th century as a planned suburban community known as Douglas Manor. In the early 20th century, the Rickert-Finlay Realty Company of Manhattan purchased 175 acres (0.71 km2) of the Douglas' family holdings, and formed the Douglas Manor Association, creating a planned community. Many of the houses in this area were built in architectural styles popular at the time, such as Tudor, Mediterranean, Colonial Revival, and Arts and Crafts. Located within the district are the separately listed Cornelius Van Wyck House and Allen-Beville House. Another notable early building is the Van Zandt manor house, which is now the Douglaston Club.

First Presbyterian Church, incorporated as the Congregational Society of Brockport, is a historic Presbyterian church located at Brockport in Monroe County, New York. It is a Greek Revival–style edifice built in 1852. The main block of the building is four bays long and three bays wide, constructed of red brick on a sandstone foundation. It features a three-stage tower with an octagonal drum from which the spire rises. The main worship space has a meeting house plan with a three sided upper gallery supported by fluted Doric columns.

The Maplewood Historic District is located in Rochester in Monroe County, New York. The district is distinguished as having landscape designs, including Maplewood Park, originally laid out by Frederick Law Olmsted.

Hamilton Farmstead is a historic farm complex and national historic district located at Mexico in Oswego County, New York. The district includes three contributing structures; the farmhouse, a barn, and a milkhouse; and three hand-dug wells. The farmhouse is a three bay, two story cobblestone building built in 1848 in the Greek Revival style.

Wilcox Farmhouse is a historic home located at Three Mile Bay in Jefferson County, New York. It was built about 1839 and is a gable ell limestone house consisting of ​2 1⁄2-story, three-by-four-bay gable front block, a ​1 1⁄2-story three-bay-square lateral wing, and a 1-story two-by-four-bay anterior wing extending behind the lateral wing. Also on the property is a contemporary privy.

Chaumont Grange Hall and Dairymen's League Building is a historic grange hall located at Chaumont in Jefferson County, New York. It was built in 1898 and is a ​2 1⁄2-story, three by four bay frame building on a foundation of limestone and concrete blocks.

George Brothers Building is a historic warehouse located at Chaumont in Jefferson County, New York. It was built in 1899 and is a two-story, three by four bay wood frame building on a low foundation of coursed limestone. It was built of prefabricated galvanized metal sheathing.

Taylor Boathouse is a historic boathouse located at Lyme in Jefferson County, New York, constructed about 1905.

Old Stone Shop is a historic commercial building located at Lyme in Jefferson County, New York. It was built in 1838–1839 and is a ​1 1⁄2-story, four-by-two-bay gable-ended building with foundation and walls of coursed quarry-dressed limestone, trimmed in dressed limestone. It was built as a double blacksmith shop and exhibits the finest commercial masonry architecture in the town of Lyme.

District School No. 3, also known as Putnam Schoolhouse, is a historic one-room school building located at Lyme in Jefferson County, New York. The schoolhouse consists of a ​1 1⁄2-story, two-by-three-bay wood-frame main block constructed about 1875, and a 1-story, two-by-one-bay rear addition constructed about 1900. Also on the property is a double privy dating to about 1900.

US Post Office-Walton is a historic post office building located at Walton in Delaware County, New York, United States. It was built in 1936-1937, and is one of a number of post offices in New York State designed by the Office of the Supervising Architect of the Treasury Department, Louis A. Simon. It is a one-story, five bay, steel frame building on a raised limestone clad foundation in the Colonial Revival style. The front section is symmetrically massed and features a slightly recessed, three bay central entrance.

New Stone Hall is a historic school building located at Franklin in Delaware County, New York, United States. It was built in 1855–1856 and is a three-story rectangular building, eight bays wide and three bays deep. It features a slate-covered hipped roof and octagonal cupola. It was built as the main academic building of the Delaware Literary Institute, then later used by the local school system. It was abandoned in 1932. It is located within the Franklin Village Historic District.

Ravina is a national historic district located at Lordville, a hamlet in the Town of Hancock in Delaware County, New York. The district contains six contributing buildings, one contributing site, and two contributing structures. It encompasses a small rural estate consisting of the main house, guest bungalow, garage, caretakers' dwelling, wood shed, and distinctive landscape features. The main residence is a three-by-three-bay, 2-story wood-frame building listed in the Sears catalog of prefabricated houses as "Shadow Lawn." It and the bungalow were built in 1926–1927.

District School 4 is a historic one room school building located at Coventry in Chenango County, New York. It is a ​1 1⁄2-story, wood-frame building on a cut-stone foundation built about 1900. It is four bays wide and three bays deep with a broad gable roof.

Hebron Valley Grange No. 1103, also known as West Hebron Methodist Church, is a historic grange building located in the hamlet of West Hebron, in the town of Hebron in Washington County, New York. It was originally built about 1839 as a Methodist meeting house on a site located 20 miles from its current location. It was moved a second time prior to 1874. In 1911, the building was purchased by a local Grange organization and used until December 1985. The original building is a three-by-three-bay, 1-story heavy timber-frame building. An addition was completed about 1874.

Paul Smith's Electric Light and Power and Railroad Company Complex is a national historic district located at Saranac Lake in Franklin County, New York. It contains two contributing buildings and two contributing structures. The powerhouse was built in 1908-1909 and is a one-story, single room brick building on a stone foundation measuring 40 feet by 55 feet. The office building was built in 1927 and is a three-story steel and masonry building with a terra cotta exterior. It is three bays wide by four bays deep. The Main Street Bridge is a concrete slab bridge built between 1924 and 1931. The Lake Flower Dam and Power Flume was built between 1936 and 1938 with Works Progress Administration assistance. 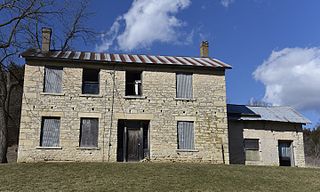 The Henry Roling House is a historic building located northwest of Bellevue, Iowa, United States. It is one of over 217 limestone structures in Jackson County from the mid-19th century, of which 101 are houses. It is similar to most of the other houses in that it is a two-story structure that follows a rectangular plan, has cut stones laid in courses, dressed stone sills and lintel, and is capped with a gable roof. This house differs from most of the others in that it is four bays wide rather than three or five. The Theodore Niemann House a mile west of this one is the oldest of the stone houses in the county, and the Roling house, built shortly after it, is very similar to it. They are similar to the Luxembourgian houses in the region in having an even number of bays, although the Roling house was not stuccoed. The house was listed on the National Register of Historic Places in 1991.