Thurmond station is a train station in Thurmond, West Virginia, United States, that is served by Amtrak, the national railroad passenger system. The Cardinal , which runs three times each week between Chicago, Illinois and New York City, New York, passes by the station three times each week in both directions. The station is on CSX Transportation's New River Line and is located on the east bank of the New River.

It is one of Amtrak's least-busy stations, it was the second least-busy for fiscal year 2006, after Greenfield Village, Michigan, which was less traveled because it had been discontinued from the Amtrak regular schedule in April 2006 (being open only to groups after that point). [3] Of the 509 stations served by Amtrak in fiscal year 2012, Thurmond was again the second least-used station, just ahead of Sanderson, Texas. [4] [5]

The long, narrow two-story slate-roofed wooden structure, built in 1905 by the Chesapeake and Ohio Railway, also houses a railroad museum and a visitor center for the New River Gorge National River. The depot features a projecting bay that served as a signal tower. The interior originally possessed three waiting rooms: one for white men, one for white women, and one for African Americans. [6] The building was renovated in 1995. It is a contributing structure in the Thurmond Historic District. [7] 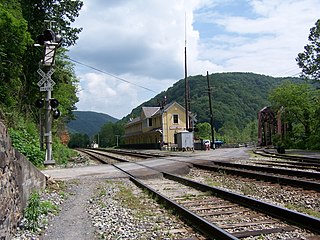 Thurmond is a town in Fayette County, West Virginia, United States, on the New River. The population was five at the 2020 census. During the heyday of coal mining in the New River Gorge, Thurmond was a prosperous town with a number of businesses and facilities for the Chesapeake and Ohio Railway.

The New River Gorge National Park and Preserve is a unit of the United States National Park Service (NPS) designed to protect and maintain the New River Gorge in southern West Virginia in the Appalachian Mountains. Established in 1978 as a national river and redesignated in 2020, the park and preserve stretches for 53 miles (85 km) from just downstream of Hinton to Hawks Nest State Park near Ansted. 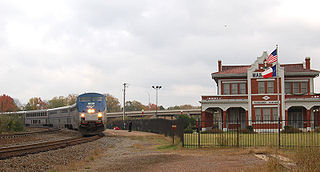 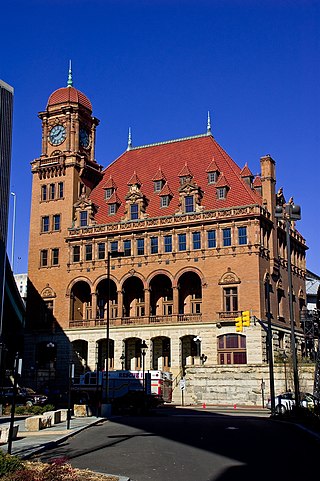 Richmond Main Street Station, officially the Main Street Station and Trainshed, is a historic railroad station and office building in Richmond, Virginia. It was built in 1901, and is served by Amtrak. It is also an intermodal station with Richmond's city transit bus services, which are performed by Greater Richmond Transit Company (GRTC). It is colloquially known by people from the city as The Clock Tower. It is a U.S. National Historic Landmark. Main Street Station serves as a secondary train station for Richmond providing limited Amtrak service directly to downtown Richmond. Several Amtrak trains serving the Richmond metropolitan area only stop at the area's primary rail station, Staples Mill Road which is located five miles to the north in Henrico County. 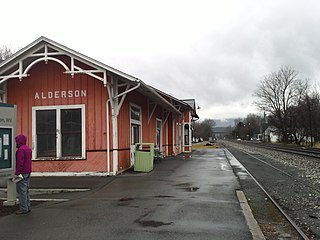 Alderson station is an Amtrak station in Alderson, West Virginia, served by the Cardinal. It is located at 1 C&O Plaza, and functions as a request stop. The station is a contributing property within the Alderson Historic District, which has been listed on the National Register of Historic Places since November 12, 1993.

Whitefish station is a stop on Amtrak's Empire Builder in Whitefish, Montana. In addition to the Empire Builder, a once-daily Greyhound Lines bus service also links the station to Kalispell and Missoula. A car rental agency operates a window within the station. The station and parking lot are owned by the Stumptown Historical Society. BNSF Railway leases office space on the upper floors of the station and owns the platform and track.

Hinton station is an Amtrak station in Hinton, West Virginia, served by the Cardinal. The station is a former Chesapeake and Ohio Railway depot, and is located in the Hinton Historic District. Constructed in 1892, the brick building includes wood canopies supported by heavy brackets featuring a wood-fan pattern trim. 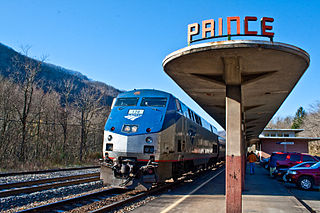 Prince station is an Amtrak station in Prince, West Virginia, served by the Cardinal. It serves as the main depot for the Beckley area because it is on the CSX mainline while Beckley itself is not.

Charleston station is an Amtrak station in Charleston, West Virginia, United States, that is listed on the National Register of Historic Places and is served by the Cardinal. The Cardinal operates as Train 50 Eastbound towards Washington D.C. and New York City departing Chicago on Saturdays, Tuesdays, and Thursdays. The train operates as Train 51 Westbound towards Chicago departing New York on Wednesdays, Fridays, and Sundays. Trains only operate to the station on Wednesdays, Fridays, and Sundays. 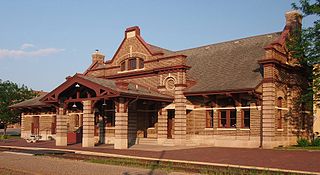 Newbern Depot, also known as Newbern Illinois Central Depot or as the Newbern–Dyersburg station, is an Amtrak station and museum in Newbern, Tennessee. It is an unstaffed flag stop on the City of New Orleans route, which serves Newbern and nearby Dyersburg when passengers have tickets to and from the station. The building was constructed by Illinois Central Railroad in 1920 and was added to the National Register of Historic Places in 1993. 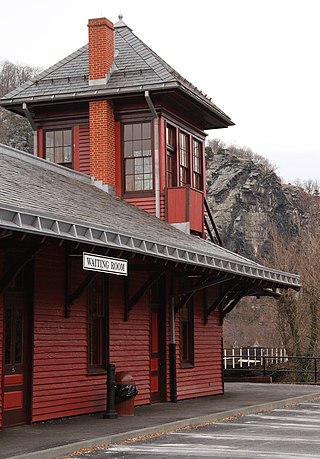 Harpers Ferry station is a railway station in Harpers Ferry, West Virginia. It is currently served by Amtrak's Capitol Limited as well as MARC commuter service. Built by the Baltimore and Ohio Railroad, the station is part of the Harpers Ferry Historic District. 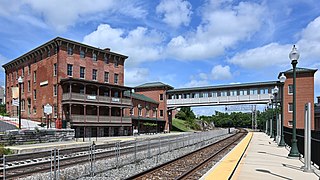 Martinsburg station is a railway station in Martinsburg, West Virginia, United States, served by MARC Brunswick Line commuter rail service and Amtrak Capitol Limited intercity rail service. The station has one side platform serving a siding track of the CSX Cumberland Subdivision, with a footbridge crossing the siding and the two main tracks to provide access to the preserved Baltimore and Ohio Railroad Martinsburg Shops complex.

Sanderson station is an Amtrak railway station serving the small West Texas town of Sanderson. The unstaffed station is located alongside Downie Street in the southwest corner of the town. The station accommodates travelers who use the combined Sunset Limited and Texas Eagle between Los Angeles and New Orleans or Chicago, respectively.

Salem station is an Amtrak train station in Salem, Oregon, United States. It is served by Amtrak Cascades corridor trains going to and from Portland, Oregon, as well as the long-distance Coast Starlight. Greyhound Lines and some regional buses also stop at the station. 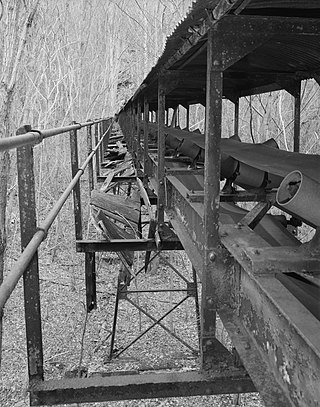 The Nuttallburg Coal Mining Complex and Town Historic District is located near Winona, West Virginia in New River Gorge National Park and Preserve. The townsite is almost directly across from the Kay Moor mine and townsite, now abandoned. Like Kay Moor, the town is built around the railroad line at the bottom of the gorge, with an array of coke ovens and mining structures, as well as a bridge across the New River to South Nuttall.

Lee Hall Depot is a historic train station and museum located in the Lee Hall neighborhood of Newport News, Virginia. It was built in about 1881, with a one-story cargo bay, and the two-story main section was added in 1893. Another one-story wing was added by the Chesapeake and Ohio Railway to the north end of the depot in 1918 to handle an influx of military personnel to Fort Eustis. The building is currently in use as a local history museum, focusing on the station's history, and the history of the Chesapeake & Ohio Railroad in Warwick County.