Thymic stromal lymphopoietin (TSLP) is a protein belonging to the cytokine family. It is known to play an important role in the maturation of T cell populations through activation of antigen-presenting cells.

TSLP is produced mainly by non-hematopoietic cells such as fibroblasts, epithelial cells and different types of stromal or stromal-like cells.[ citation needed ] These cells are located in regions where TSLP activity is required.

TSLP production has been observed in various species, including humans and mice. In humans TSLP is encoded by the TSLP gene. [5] [6] Alternative splicing of this gene results in two transcript variants. [6]

TSLP signals through a heterodimeric receptor complex composed of the thymic stromal lymphopoietin receptor CRLF2 and the IL-7R alpha chain. After binding STAT5 phosphorylation is induced, resulting in the expression of downstream transcription factors. [11]

TSLP expression is linked to many disease states including asthma, [12] inflammatory arthritis, [13] atopic dermatitis, [8] eczema, eosinophilic esophagitis and other allergic states. [14] [15] The factors inducing the activation of TSLP release are not clearly defined.

Expression of TSLP is enhanced under asthma-like conditions (aka Airway HyperResponsiveness or AHR model in the mouse), conditioning APCs in order to orient the differentiation of T cells coming into the lungs towards a TH2 profile (T helper 2 pathway).[ citation needed ] The TH2 cells then release factors promoting an inflammatory reaction following the repeated contact with a specific antigen in the airways [ citation needed ].

TSLP-activated Langerhans cells of the epidermis induce the production of pro-inflammatory cytokines like TNF-alpha by T cells potentially causing atopic dermatitis. [8] It is thought that understanding the mechanism of TSLP production and those potential substances that block the production, one may be able to prevent or treat conditions of asthma and/or eczema. [16]

The TSLP signaling axis is an attractive therapeutic target. Amgen's Tezepelumab, a monoclonal antibody which blocks TSLP, is currently approved for the treatment of severe asthma. [17] [18] Fusion proteins consisting of TSLPR and IL-7Rα which can trap TSLP with excellent affinity have also been designed. [19] Additional approaches towards TSLP/TSLPR inhibition include peptides derived from the TSLP:TSLPR interface, [20] natural products [21] and computational fragment-based screening. [22] 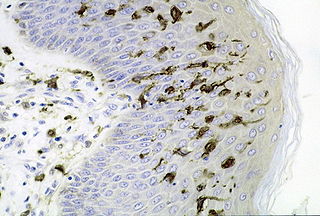 Plasmacytoid dendritic cells (pDCs) are a rare type of immune cell that are known to secrete large quantities of type 1 interferon (IFNs) in response to a viral infection. They circulate in the blood and are found in peripheral lymphoid organs. They develop from bone marrow hematopoietic stem cells and constitute < 0.4% of peripheral blood mononuclear cells (PBMC). Other than conducting antiviral mechanisms, pDCs are considered to be key in linking the innate and adaptive immune systems. However, pDCs are also responsible for participating in and exacerbating certain autoimmune diseases like lupus. pDCs that undergo malignant transformation cause a rare hematologic disorder, blastic plasmacytoid dendritic cell neoplasm.

Interleukin 17 family is a family of pro-inflammatory cystine knot cytokines. They are produced by a group of T helper cell known as T helper 17 cell in response to their stimulation with IL-23. Originally, Th17 was identified in 1993 by Rouvier et al. who isolated IL17A transcript from a rodent T-cell hybridoma. The protein encoded by IL17A is a founding member of IL-17 family. IL17A protein exhibits a high homology with a viral IL-17-like protein encoded in the genome of T-lymphotropic rhadinovirus Herpesvirus saimiri. In rodents, IL-17A is often referred to as CTLA8.

Chemokine ligand 18 (CCL18) is a small cytokine belonging to the CC chemokine family. The functions of CCL18 have been well studied in laboratory settings, however the physiological effects of the molecule in living organisms have been difficult to characterize because there is no similar protein in rodents that can be studied. The receptor for CCL18 has been identified in humans only recently, which will help scientists understand the molecule's role in the body.

OX40L is the ligand for OX40 and is stably expressed on many antigen-presenting cells such as DC2s, macrophages, and activated B lymphocytes.

C-C chemokine receptor type 7 is a protein that in humans is encoded by the CCR7 gene. Two ligands have been identified for this receptor: the chemokines ligand 19 (CCL19/ELC) and ligand 21 (CCL21).

CD83 is a human protein encoded by the CD83 gene.

LIGHT, also known as tumor necrosis factor superfamily member 14 (TNFSF14), is a secreted protein of the TNF superfamily. It is recognized by herpesvirus entry mediator (HVEM), as well as decoy receptor 3.

Natural cytotoxicity triggering receptor 3 is a protein that in humans is encoded by the NCR3 gene. NCR3 has also been designated as CD337 and as NKp30. NCR3 belongs to the family of NCR membrane receptors together with NCR1 (NKp46) and NCR2 (NKp44).

Triggering receptor expressed on myeloid cells 1 (TREM-1) is a protein that in humans is encoded by the TREM1 gene. TREM-1 is a surface receptor that amplifies inflammatory processes in vitro.

Lymphocyte-activation gene 3, also known as LAG-3, is a protein which in humans is encoded by the LAG3 gene. LAG3, which was discovered in 1990 and was designated CD223 after the Seventh Human Leucocyte Differentiation Antigen Workshop in 2000, is a cell surface molecule with diverse biologic effects on T cell function. It is an immune checkpoint receptor and as such is the target of various drug development programs by pharmaceutical companies seeking to develop new treatments for cancer and autoimmune disorders. In soluble form it is also being developed as a cancer drug in its own right.

Cytokine receptor-like factor 2 is a protein that in humans is encoded by the CRLF2 gene. It forms a ternary signaling complex with TSLP and interleukin-7 receptor-α, capable of stimulating cell proliferation through activation of STAT3, STAT5 and JAK2 pathways and is implicated in the development of the hematopoietic system. Rearrangement of this gene with immunoglobulin heavy chain gene (IGH), or with P2Y purinoceptor 8 gene (P2RY8) is associated with B-progenitor- and Down syndrome- acute lymphoblastic leukemia (ALL). 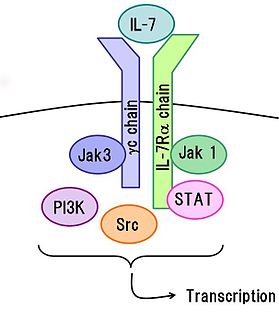 Interleukin-7 receptor subunit alpha (IL7R-α) also known as CD127 is a protein that in humans is encoded by the IL7R gene.

Chemorepulsion is the directional movement of a cell away from a substance. Of the two directional varieties of chemotaxis, chemoattraction has been studied to a much greater extent. Only recently have the key components of the chemorepulsive pathway been elucidated. The exact mechanism is still being investigated, and its constituents are currently being explored as likely candidates for immunotherapies.

In cell biology, TH9 cells are a sub-population of CD4+T cells that produce interleukin-9 (IL-9). They play a role in defense against helminth infections, in allergic responses, in autoimmunity, and tumor suppression.

Dipyaman Ganguly is an Indian physician-scientist immunologist and cell biologist, currently a Principal Scientist and Swarnajayanthi Fellow at the CSIR-Indian Institute of Chemical Biology (IICB). He heads the Dendritic Cell Laboratory of IICB, popularly known as Ganguly Lab, where he hosts several researchers involved in research on regulation of innate Immunity and pathogenesis of inflammatory disorders.