Last updated July 13, 2021
This article is about the Sabahan defunct political party of the 1960s. For the current manifestation of UPKO, formed in Sabah in 1994, see United Pasokmomogun Kadazandusun Murut Organisation.
‹ The template Infobox political party is being considered for merging. ›
Political partyin Malaysia

The United Pasokmomogun Kadazan Organisation (Malay : Pertubuhan Kebangsaan Kadazan Bersatu; abbrev: UPKO) was a Kadazan-Dusun-Murut (KDM) based political party in North Borneo and later Sabah at the time it became a state of Malaysia in the 1960s. [1] [2]

The party was initially started as the United National Kadazan Organisation (UNKO) which was founded by Donald Stephens in 1961, with its core constituency of indigenous Sabahans. [3] UNKO modeled after United Malays National Organisation (UMNO) in Malaya; was the first indigenous party in Sabah formed to represent the interests of the Kadazandusun community in Sabah. At the time of its founding it had approximately 20,000 members. [4]

The new party UNKO has members which does not support the "Malaysia project" and disagrees with Donald Stephens, hence they split to form a new group led by G. S. Sundang going on to form the United Pasok Momogun Organisation (UPMO) in January 1962. [3]

Upon the formation of Malaysia in 1963, UNKO entered into a Sabah Alliance coalition with the United Sabah National Organisation (USNO), a Muslim party, and the Sabah Chinese Association (SCA) to form a consociationalism new Government of Sabah; [3] with its president Stephens became the state's first Chief Minister. [4] In May 1964, the breakaway UPMO party, eventually reunited with its parent party. [1] The merger saw UNKO renamed itself as the United Pasokmomogun Kadazan Organisation (UPKO) in June 1964. [2]

After Stephens was forced out of the chief ministership in 1964 and became a federal minister., [5] the party was dissolved on 28 December 1967 and absorbed into United Sabah National Organisation (USNO). [2] [6] 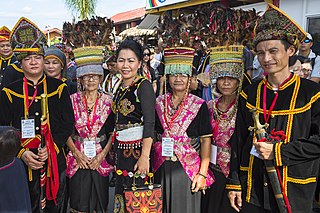 Kadazan-Dusun are two indigenous peoples of Sabah, Malaysia—the ethnic groups Kadazan and Dusun. The Kadazandusun is the largest native group of Bumiputra in Sabah. They are also known as "Mamasok", which means "originals" or "indigenous people", respectively. Most of the Kadazan-Dusun tribes believed they are descendants of Nunuk Ragang people. Kadazan-Dusun has been recognized as an indigenous nation of Borneo with documented heritage by the United Nations Educational, Scientific and Cultural Organization (UNESCO) since 2004. 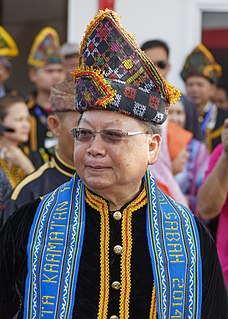 Tan Sri Datuk Seri Panglima Joseph Pairin Kitingan is a Malaysian politician who served as the 7th Chief Minister of Sabah from April 1985 to March 1994 and Member of Parliament (MP) for Keningau from August 1986 to May 2018. He is founding President of the United Sabah Party (PBS) and brother of Jeffrey Kitingan, the Deputy Chief Minister II and State Minister of Agriculture and Fisheries of Sabah and President of Homeland Solidarity Party (STAR) as well as uncle of Maximus Ongkili, the Minister in the Prime Minister's Department in charge of Sabah and Sarawak affairs and President of PBS.

Datuk Seri Panglima Shafie bin Apdal is a Malaysian politician who has served as the Member of Parliament (MP) for Semporna since April 1995 and Member of the Sabah State Legislative Assembly (MLA) for Senallang since May 2018. He served as the 15th Chief Minister and the State Minister of Finance of Sabah from May 2018 to September 2020, Minister of Rural and Regional Development from April 2009 to July 2015 and Vice-President of the United Malays National Organisation (UMNO), a component party of the ruling Barisan Nasional (BN) coalition. He has served as the 1st and founding President of WARISAN, the opposition party of Sabah that is allied with the Pakatan Harapan (PH) opposition coalition, since October 2016. He lost the power as Chief Minister of Sabah following the defeat of his coalition, Sabah Heritage Party + in the 2020 state election. 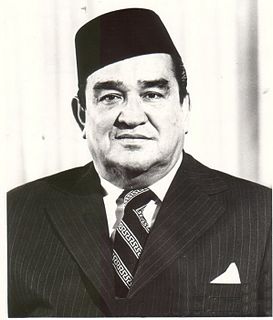 Muhammad Fuad Stephens, was a Malaysian politician who served as the 1st and 5th Chief Minister of Sabah from September 1963 to December 1964 and again briefly from April 1976 to his death in June 1976, 3rd Yang di-Pertua Negeri of Sabah from September 1973 to July 1975, 6th High Commissioner of Malaysia to Australia from 1968 to 1973. In addition, he also served as the 1st Huguan Siou or Paramount Leader of the Kadazandusun community. He played a role in bringing Sabah into the Federation of Malaysia in 1963. While he was initially against the idea of Sabah joining in the Federation, given British concerns about the stability of the region and their move to relinquish all their colonies in the post WWII era, he was gradually convinced to work towards it. He held the chief minister's post from 16 September 1963 until 31 December 1964 when he was forced to resign; and again in 1976 for 54 days from 15 April. 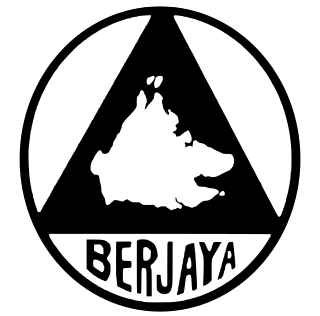 Sabah People's United Front or in Malay Parti Bersatu Rakyat Jelata Sabah is more commonly known by its abbreviation BERJAYA, was a political party based in the state of Sabah, Malaysia. BERJAYA was formed by former United Sabah National Organisation (USNO) secretary-general Harris Salleh who was later joined by Fuad Stephens, who served as the first Chief Minister of Sabah as well as president of the United Pasokmomogun Kadazan Organisation (UPKO). Stephens became the fifth Chief Minister after BERJAYA won the 1976 state election in April but died in June the same year, being succeeded by Salleh. The party had been a partner of Barisan Nasional (BN), the then ruling coalition of Malaysia since its inception on 15 July 1975.

The United Sabah National Organisation was a political party in North Borneo and later Sabah, Malaysia. The widely known Sabah's Muslim indigenous especially Suluk-Bajau ethnic based party was founded by the third Chief Minister of Sabah; Mustapha Harun in December 1961.

The Alliance Party was a political coalition in Malaysia. The Alliance Party, whose membership comprised United Malays National Organisation (UMNO), Malaysian Chinese Association (MCA) and Malaysian Indian Congress (MIC), was formally registered as a political organisation on 30 October 1957. It was the ruling coalition of Malaya from 1957 to 1963, and Malaysia from 1963 to 1973. The coalition became the Barisan Nasional in 1973.

The United Pasok Nunukragang National Organisation is a regional political party in Malaysia based in the state of Sabah. It was established in 1978. Before its deregistration, it was the oldest political party in Sabah that was currently still in existence. Despite being a party that maintains a Kadazan-Dusun ethnocentric platform, membership is opened to all ethnicities and the party's leadership has multi-ethnic representation.

Datuk Seri Panglima Wilfred Bumburing is a Malaysian politician. He is a member of the Sabah State Legislative Assembly and a former Member of the Parliament of Malaysia for the seat of Tuaran, Sabah (2008–2013).

Datuk Alliance Siringan bin Gubat was a Malaysian politician. He was formerly the Minister for Resource Development and Information Technology in the state government of Sabah led by then-Chief Minister, Musa Aman for a single term from 2013 until his death in 2018 and was also the one-term assemblyman for the Paginatan constituency in the Sabah State Legislative Assembly. From 2008 to 2013, he was the Member of the Parliament of Malaysia for the Ranau constituency for a single term. He is a member of the United Pasokmomogun Kadazandusun Murut Organisation (UPKO) party which was formerly in the Barisan Nasional (BN) coalition.

Sodomon Gunsanad Kina (1894-1966) was a native chief of Keningau, in North Borneo, who later became a politician in unified Malaysia. 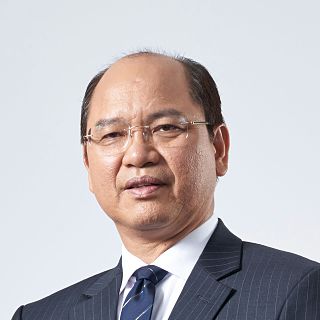 Datuk Seri Panglima Wilfred Madius Tangau is a Malaysian politician who served as the Deputy Chief Minister and State Minister of Trade and Industry of Sabah from May 2018 to the fall of the Sabah Heritage Party (WARISAN) administration led by former Chief Minister Shafie Apdal following its defeat in the 2020 Sabah state election in September 2020. He once served as the federal Minister of Science, Technology and Innovation from 2015 until 2018 and currently the Member of Parliament (MP) for Tuaran, Sabah,.

The Sabah Democratic Party was a political party based in Sabah, Malaysia. It was an ethnically-based party striving to voice the rights and advance the development of Kadazan-Dusun-Murut (KDM) populations of Sabah and the Orang Asli of Peninsular Malaysia. 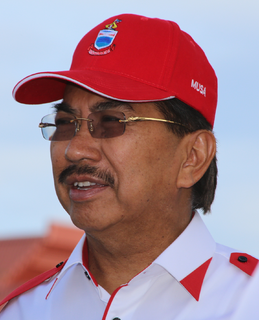 The 2018 Sabah state election took place on 9 May 2018 in concurrence with the 14th Malaysian general election. This election was to elect 60 members of the 15th Sabah State Legislative Assembly. The previous Assembly was dissolved on 7 April 2018. 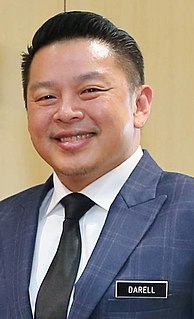 Datuk Darell Leiking, also known as Ignatius Dorell Leiking is a Malaysian politician who served as the Minister of International Trade and Industry in the Pakatan Harapan (PH) administration under former Prime Minister Mahathir Mohamad from July 2018 to the collapse of the PH administration in February 2020. He has served as the Member of Parliament (MP) for Penampang since May 2013, Member of the Sabah State Legislative Assembly (MLA) for Moyog since September 2020 and founding as well as 1st Deputy President of the Sabah Heritage Party (WARISAN) which is aligned with the PH opposition coalition since October 2016.

Jonathan bin Yasin is a Malaysian politician who has served as the Deputy Minister of Home Affairs II in the Perikatan Nasional (PN) administration under Prime Minister Muhyiddin Yassin and Minister Hamzah Zainudin since March 2020 and Member of Parliament (MP) for Ranau since May 2018. He joined the Malaysian United Indigenous Party (BERSATU), a component party of the PN coalition after resigning from the People's Justice Party (PKR), a component party of the Pakatan Harapan (PH) opposition coalition.

The United Progressive Kinabalu Organisation is a multiracial political party based in Sabah, Malaysia. The party was rebranded from its previous party's name, United Pasokmomogun Kadazandusun Murut Organisation using the same UPKO acronym; which was a widely known Kadazan-Dusun-Murut based party in 2019. The party had earlier been renamed once before in 1999 from its initial 1994 formation name of Sabah Democratic Party.

United Pasok Momogun Organisation is an ethnically-based political party in North Borneo. It was a splinter party of United National Kadazan Organisation (UNKO); founded by Donald Stephens earlier in 1961. The breakaway UPMO formed by Orang Kaya Kaya (OKK) Datuk G.S. Sundang, in January 1962 to fight for the interest of Kadazan-Dusun-Murut (KDM) races; with the supports and encouragement of the Chinese in Sabah. The split was in reaction and protest to the suggestion of the Prime Minister of Malaya, Tunku Abdul Rahman to create a new federation country named Malaysia, dubbed Projek Malaysia.

The 2020 Sabah state election took place on 26 September 2020 to elect all 73 elected members of the 16th Sabah State Legislative Assembly. The previous Assembly was dissolved on 30 July 2020.

Abdul Ghani bin Gilong was a Malaysian politician. He was a federal cabinet minister in various portfolios from 1968 to 1978.