Last updated September 23, 2021
Facial muscle that raises the corner of the mouth and moves it posteriorly during smiling

The zygomaticus major muscle originates from the upper margin of the temporal process, part of the lateral surface of the zygomatic bone. [1] [2] It inserts into tissue at the corner of the mouth. [2]

The zygomaticus major muscle is supplied by a buccal branch and a zygomatic branch of the facial nerve (VII).

The zygomaticus major muscle raises the corners of the mouth and draws them posteriorly when a person smiles. [6] The average muscle can contract with a force of 200 g. [2]

The zygomaticus major muscle may be used in reconstructive surgery to replace lost tissue, such as with injuries to the lips. [7] 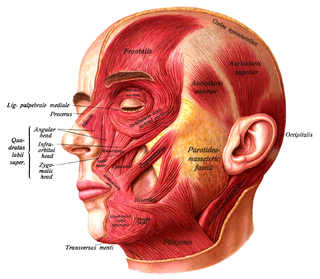 The face is the front of an animal's head that features three of the head's sense organs, the eyes, nose, and mouth, and through which animals express many of their emotions. The face is crucial for human identity, and damage such as scarring or developmental deformities affects the psyche adversely. 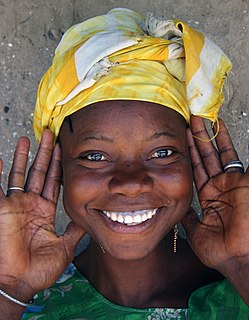 A smile is formed primarily by flexing the muscles at the sides of the mouth. Some smiles include a contraction of the muscles at the corner of the eyes, an action known as a Duchenne smile. Among humans, a smile expresses delight, sociability, happiness, joy or amusement. It is distinct from a similar but usually involuntary expression of anxiety known as a grimace. Although cross-cultural studies have shown that smiling is a means of communication throughout the world, there are large differences among different cultures, religions and societies, with some using smiles to convey confusion or embarrassment.

A dimple is a small natural indentation in the flesh on a part of the human body, most notably in the cheek. Numerous cultures believe that cheek dimples are a good luck charm that entices people who think they are physically attractive, but they are also associated with heroism and innocence, which has been included in literature for many centuries.

Lips are a visible body part at the mouth of many animals, including humans.

The platysma muscle is a superficial muscle of the human neck that overlaps the sternocleidomastoid. It covers the anterior surface of the neck superficially. When it contracts, it produces a slight wrinkling of the neck, and a "bowstring" effect on either side of the neck.

The zygomaticus minor muscle is a muscle of facial expression. It originates from the zygomatic bone, lateral to the rest of the levator labii superioris muscle, and inserts into the outer part of the upper lip. It draws the upper lip backward, upward, and outward and is used in smiling. It is innervated by the facial nerve (VII). 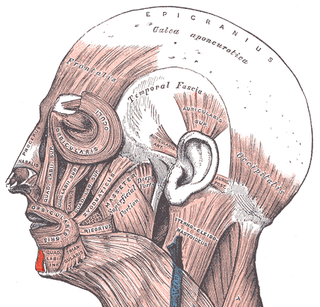 The mentalis muscle is a paired central muscle of the lower lip, situated at the tip of the chin. It originates from the mentum of the mandible, and inserts into the soft tissue of the chin. It is sometimes referred to as the "pouting muscle" due to it raising the lower lip and causing chin wrinkles.

The depressor anguli oris muscle is a facial muscle. It originates from the mandible and inserts into the angle of the mouth. It is associated with frowning, as it depresses the corner of the mouth. 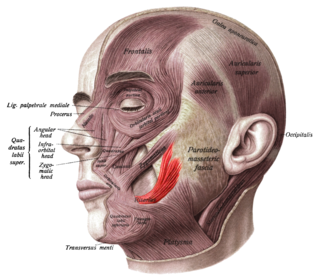 The risorius is a muscle of facial expression which arises in the fascia over the parotid gland and, passing horizontally forward, superficial to the platysma, inserts onto the skin at the angle of the mouth. It is a narrow bundle of fibers, broadest at its origin, but varies much in its size and form.

The facial artery is a branch of the external carotid artery that supplies structures of the superficial face. 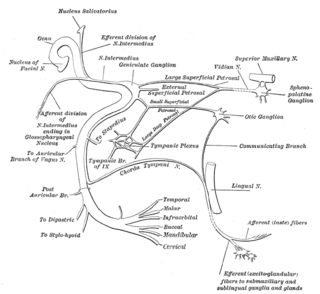 The marginal mandibular branch of the facial nerve passes forward beneath the platysma and depressor anguli oris, supplying the muscles of the lower lip and chin, and communicating with the mental branch of the inferior alveolar nerve. 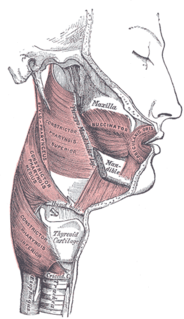 The buccal fat pad, is one of several encapsulated fat masses in the cheek. It is a deep fat pad located on either side of the face between the buccinator muscle and several more superficial muscles. The inferior portion of the buccal fat pad is contained within the buccal space. It should not be confused with the malar fat pad, which is directly below the skin of the cheek. It should also not be confused with jowl fat pads. It is implicated in the formation of hollow cheeks and the nasolabial fold, but not in the formation of jowls.

The nasolabial folds, commonly known as "smile lines" or "laugh lines", are facial features. They are the two skin folds that run from each side of the nose to the corners of the mouth. They are defined by facial structures that support the buccal fat pad. They separate the cheeks from the upper lip. The term derives from Latin nasus for "nose" and labium for "lip". Nasolabial fold is a misnomer, however. The proper anatomical term is melolabial fold, meaning the fold between the cheek and lip.

Zygoma reduction, also known as cheekbone reduction surgery, is a surgery used to reduce the facial width by excising part of the zygomatic bone and arch. Wide cheekbones are a characteristic facial trait of Asians, whose skull shapes tend to be more brachycephalic in comparison with Caucasian counterparts, whose skull shapes tend to be more dolichocephalic .This surgery is popular among Asians due to their inherent wide cheekbones. Due to the advanced surgical skills of Korean surgeons who perform facial contouring surgeries, the number of Asian people undergoing this surgery is increasing.

The cheek constitutes the facial periphery, plays a key role in the maintenance of oral competence and mastication, is involved in the facial manifestation of human emotion, and supports neighboring primary structures.