Year 1299 ( MCCXCIX ) was a common year starting on Thursday (link will display the full calendar) of the Julian calendar.

Year 1304 (MCCCIV) was a leap year starting on Wednesday of the Julian calendar.

Year 1316 (MCCCXVI) was a leap year starting on Thursday of the Julian calendar.

The Battle of Pagan was fought in 1287 between Kublai Khan's Yuan dynasty, division of the Mongol Empire, and their neighbors to the south, the Pagan Empire in Burma. The invasion ended the Pagan Empire, which disintegrated into several small kingdoms.

Jalal-ud-din Khalji was the founder and first Sultan of the Khalji dynasty that ruled the Delhi Sultanate from 1290 to 1320.

Hizabruddin, better known by his title Zafar Khan, was a general of the Delhi Sultanate ruler Alauddin Khalji. He held charge of Multan, Samana, and Sivistan at various times during Alauddin's reign and successfully defeated the [[Mongols].

Kyawswa was king of the Pagan dynasty of Burma (Myanmar) from 1289 to 1297. Son of the last sovereign king of Pagan Narathihapate, Kyawswa was one of many "kings" that emerged after the collapse of the Pagan Empire in 1287. Though still styled as King of Pagan, Kyawswa's effective rule amounted to just the area around Pagan city. Felt threatened by the three brothers of Myinsaing, who were nominally his viceroys, Kyawswa decided to become a Mongol vassal, and received such recognition from the Mongols in March 1297. He was ousted by the brothers in December 1297, and killed along with his son Theingapati on 10 May 1299.

The Myinsaing Kingdom was the kingdom that ruled central Burma (Myanmar) from 1297 to 1313. Co-founded by three brothers from Myinsaing, it was one of many small kingdoms that emerged following the collapse of Pagan Empire in 1287. Myinsaing successfully fended off the second Mongol invasion in 1300–01, and went on to unify central Burma from Tagaung in the north to Prome (Pyay) in the south. The brothers' co-rule ended between 1310 and 1313, with the death of the two elder brothers. In 1315, the central Burmese state split into two rival states of Pinya and Sagaing. Central Burma would not be reunified until the rise of Ava five decades later.

Yazathingyan was a co-founder of Myinsaing Kingdom in present-day Central Burma (Myanmar). As a senior commander in the Royal Army of the Pagan Empire, he, along with his two brothers Athinkhaya and Thihathu, led Pagan's successful defense of central Burma against the Mongol invasions in 1287. Following the collapse of the Pagan Empire, the brothers became rivals of King Kyawswa of Pagan in central Burma, and overthrew him in December 1297, nine months after Kyawswa became a Mongol vassal. They successfully defended the second Mongol invasion (1300–01), and emerged the sole rulers of central Burma.

The Sagaing Kingdom was a small kingdom ruled by a junior branch of the Myinsaing dynasty from 1315 to 1365. Originally the northern province of Sagaing of the Pinya Kingdom, it became de facto independent after Prince Saw Yun successfully fought for autonomy from his father King Thihathu in 1315–17. Sagaing formally seceded from Pinya in 1325 after Thihathu's death.

Pratāparudra, also known as Rudradeva II, was the last ruler of the Kakatiya dynasty of India. He ruled the eastern part of Deccan, with his capital at Warangal. 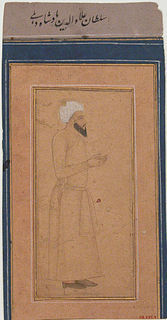 ʿAlāʾ ud-Dīn Khaljī, born as Ali Gurshasp, was the second and the most powerful emperor of the Khalji dynasty that ruled the Delhi Sultanate in the Indian subcontinent. Alauddin instituted a number of significant administrative changes, related to revenues, price controls, and society. He is noted for thwarting the Mongol invasions of India.

The second Mongol invasion of Burma by the Yuan dynasty under Temür Khan was repulsed by the Burmese Myinsaing Kingdom in 1301.

Almas Beg, better known by his title Ulugh Khan, was a brother and a general of the Delhi Sultanate ruler Alauddin Khalji. He held the iqta' of Bayana in present-day India.

In the winter of 1297, Kadar, a noyan of the Mongol Chagatai Khanate invaded the Delhi Sultanate ruled by Alauddin Khalji. The Mongols ravaged the Punjab region, advancing as far as Kasur. Alauddin sent an army led by his brother Ulugh Khan to check their advance. This army defeated the invaders on 6 February 1298, killing around 20,000 of them, and forcing the Mongols to retreat.

Theingapati was heir-apparent of the Pagan Dynasty of Burma (Myanmar) from 1289 to 1297. The crown prince is known for his mission to Beijing in which he sought and received the Mongol Empire's recognition of his father, Kyawswa, as King of Pagan in March 1297. The prince was arrested after his father was overthrown in December 1297 by the three brothers of Myinsaing. The brothers branded the father-son duo as traitors and executed them in May 1299.

Kumara Kassapa or Kumara Kathapa was the Mongol-installed King of Pagan, who reigned for ten weeks in 1301. The second son of King Kyawswa of Pagan sought Mongol intervention after his father was overthrown by the Myinsaing brothers in 1297. Declared the rightful king of Burma by Emperor Temür Khan in 1300, Kumara Kassapa returned to Pagan (Bagan) with a Mongol invasion force in 1301, only to retreat after the Mongol general staff accepted a bribe.