Alcyonacea, or soft corals, are an order of corals that do not produce calcium carbonate skeletons. Formerly known as gorgonians, [2] [3] they are sessile colonial cnidarians found throughout the oceans of the world, especially in the tropics and subtropics. Common names for subset of this order are sea fans and sea whips and are similar to the sea pen, a soft coral. Individual tiny polyps form colonies that are normally erect, flattened, branching, and reminiscent of a fan. Others may be whiplike, bushy, or even encrusting. [4] A colony can be several feet high and across, but only a few inches thick. They may be brightly coloured, often purple, red, or yellow. Photosynthetic gorgonians can be successfully kept in captive aquaria.

About 500 different species of gorgonians are found in the oceans of the world, but they are particularly abundant in the shallow waters of the Western Atlantic, including Florida, Bermuda, and the West Indies. [5]

Measurements of the gorgonin and calcite within several long-lived species of gorgonians can be useful in paleoclimatology and paleoceanography, as their skeletal growth rate and composition are highly correlated with seasonal and climatic variation. [7] [8] [9]

Soft corals contain minute, spiny skeletal elements called sclerites, useful in species identification. Sclerites give these corals some degree of support and give their flesh a spiky, grainy texture that deters predators. In the past, soft corals were thought to be unable to lay new foundations for future corals, but recent findings suggest that colonies of the leather-coral genus Sinularia are able to cement sclerites and consolidate them at their base into alcyonarian spiculite, [10] thus making them reef builders.

Unlike stony corals, most soft corals thrive in nutrient-rich waters with less intense light. Almost all use symbiotic photosynthetic zooxanthella as a major energy source. However, most readily eat any free-floating food, such as zooplankton, out of the water column. They are integral members of the reef ecosystem and provide habitat for fish, snails, algae, and a diversity of other marine species.

Despite being dominated by "soft corals", the order Alcyonacea now contains all species known as "gorgonian corals", that produce a more or less hard skeleton, though quite different from "true" corals (Scleractinia). These can be found in suborders Holaxonia, Scleraxonia, and Stolonifera.

Many soft corals are easily collected in the wild for the reef aquarium hobby, as small cuttings are less prone to infection or damage during shipping than stony corals. Nevertheless, home-grown specimens tend to be more adaptable to aquarium life and help conserve wild reefs. Soft corals grow quickly in captivity and are easily divided into new individuals, and so those grown by aquaculture are often hardier and less expensive than imported corals from the wild.

Each gorgonian polyp has eight tentacles, which catch plankton and particulate matter for consumption. This process, called filter feeding, is facilitated when the "fan" is oriented across the prevailing current to maximise water flow to the gorgonian, hence food supply.

Some gorgonians contain algae, or zooxanthellae. This symbiotic relationship assists in giving the gorgonian nutrition by photosynthesis. Gorgonians possessing zooxanthellae are usually characterized by brownish polyps.

Gorgonians are found primarily in shallow waters, though some have been found at depths of several thousand feet. [4] [6] The size, shape, and appearance of gorgonians can be correlated with their location. The more fan-shaped and flexible gorgonians tend to populate shallower areas with strong currents, while the taller, thinner, and stiffer gorgonians can be found in deeper, calmer waters. [4]

Other fauna, such as hydrozoa, bryozoa, and brittle stars, are known to dwell within the branches of gorgonian colonies. [11] The pygmy seahorse not only makes certain species of gorgonians its home, but also closely resembles its host, thus is well camouflaged. [12] Two species of pygmy seahorse, Hippocampus bargibanti and Hippocampus denise, are obligate residents on gorgonians. H. bargibanti is limited to two species in the single genus Muricella.

Gorgonians produce unusual organic compounds in their tissues, particularly diterpenes, and some of these are important candidates for new drugs. [13] These compounds may be part of the chemical defenses produced by gorgonians to render their tissue distasteful to potential predators. [14] Bottlenose dolphins in the Red Sea have been observed swimming against these tissues, in what is thought to be an attempt to take advantage of the antimicrobial qualities of diterpenes. [15] Despite these chemical defenses, the tissues of gorgonians are prey for flamingo tongue snails of the genus Cyphoma, the fireworm Hermodice spp., and their polyps are food for butterflyfishes [16]

The World Register of Marine Species lists these suborders and families: [17] 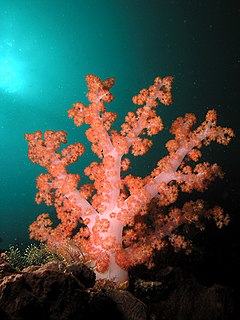 Octocorallia is a subclass of Anthozoa comprising around 3,000 species of water-based organisms formed of colonial polyps with 8-fold symmetry. It includes the blue coral, soft corals, sea pens, and gorgonians within three orders: Alcyonacea, Helioporacea, and Pennatulacea. These organisms have an internal skeleton secreted by mesoglea and polyps with eight tentacles and eight mesentaries. As with all Cnidarians these organisms have a complex life cycle including a motile phase when they are considered plankton and later characteristic sessile phase. 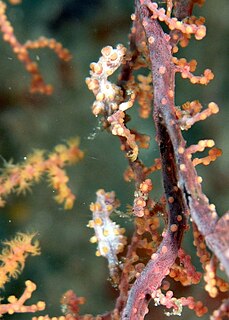 The pygmy seahorses comprise several species of tiny seahorse in the syngnathid family or Syngnathidae. Family Syngnathidae is part of order Syngnathiformes, which contains fishes with fused jaws that suck food into tubular mouths. They are found in Southeast Asia in the Coral Triangle area. They are some of the smallest seahorse species in the world, typically measuring less than 2 centimetres (0.79 in) in height.

Hippocampus bargibanti, also known as Bargibant's seahorse or the pygmy seahorse, is a seahorse of the family Syngnathidae found in the central Indo-Pacific area.

Alcyoniidae is a family of leathery or soft corals in the phylum Cnidaria.

Scleraxonia is a suborder of corals, a member of the phylum Cnidaria. 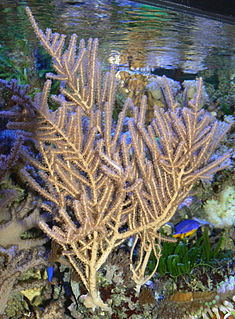 Holaxonia is a suborder of soft corals, a member of the phylum Cnidaria. Members of this suborder are sometimes known as gorgonians and include the sea blades, the sea fans, the sea rods and the sea whips. These soft corals are colonial, sessile organisms and are generally tree-like in structure. They do not have a hard skeleton composed of calcium carbonate but have a firm but pliable, central axial skeleton composed of a fibrous protein called gorgonin embedded in a tissue matrix, the coenenchyme. In some genera this is permeated with a calcareous substance in the form of fused spicules. Members of this suborder are characterized by having an unspiculated axis and often a soft, chambered central core. The polyps have eight-fold symmetry and in many species, especially in the families Gorgoniidae and Plexauridae, contain symbiotic photosynthetic algae called zooxanthellae. These soft corals are popular in salt water aquaria. 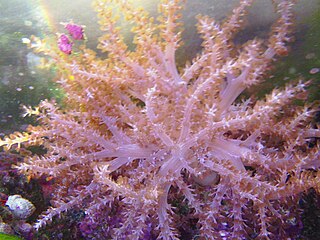 Nephtheidae is a family of soft corals in the phylum Cnidaria. Members of this family are known as carnation corals, tree corals or colt soft corals. They are very attractive and show a wide range of rich and pastel colours including reds, pinks, yellows and purples. They are popular with reef aquarium hobbyists.

Melithaea ochracea is a species of colonial soft coral in the family Melithaeidae, commonly known as knotted fan coral. It grows in tree-like fans on coral reefs in the South China Sea. It is used in the jewellery industry under the name red spongy coral.

Leptogorgia hebes, commonly known as the regal sea fan or false sea fan, is a species of soft coral in the family Gorgoniidae. It was formerly included in the genus Lophogorgia but that genus has been dismantled. 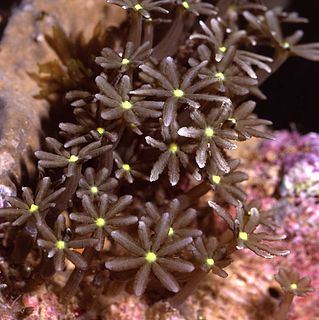 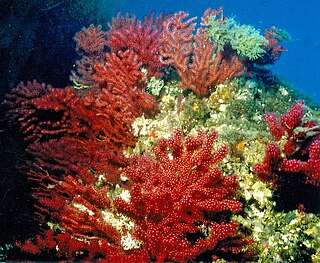 Plexauridae is a family of marine colonial octocorals in the phylum Cnidaria. Members of this family are found in shallow tropical and subtropical seas. Many species contain symbiotic photosynthetic protists called zooxanthellae. 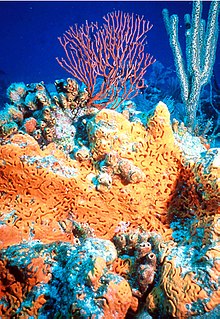 Plexaurella nutans, the giant slit-pore sea rod, is a tall species of soft coral in the family Plexauridae. It is a relatively uncommon species and is found in shallow seas in the Caribbean region. 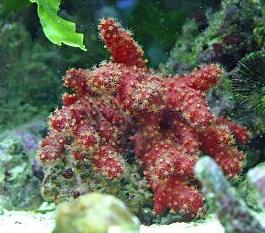 Nidaliidae is a family of soft corals in the phylum Cnidaria. Some members of this family are similar in appearance to gorgonians. They are difficult to keep in the reef aquarium because they do not contain symbiotic zooxanthellae and therefore need to be fed on zooplankton. Others, in the genera Agaricoidea, Nidalla and Pieterfaurea, more resemble members of the family Nephtheidae and these are somewhat easier to keep in the aquarium. 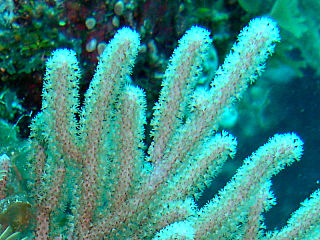 Eunicea is a genus of gorgonian-type octocorals in the family Plexauridae. These branched octocorals typically have knobby protuberances from which the polyps protrude. They are often stiffened by purple sclerites and some colonies, in brightly lit back-reef areas are purple, though most colonies are brown or grey. The polyps in some species are large and feathery in appearance. The growth of these corals is rapid and they can be kept in a reef aquarium.

Alcyonium coralloides, commonly known as false coral, is a colonial species of soft coral in the family Alcyoniidae. It is native to the northeastern Atlantic Ocean and the Mediterranean Sea. In the former location it generally grows as sheets or small lobes but in the latter it is parasitic and overgrows sea fans.

Antillogorgia bipinnata, the bipinnate sea plume, is a species of colonial soft coral, a sea fan in the family Gorgoniidae. It is found in the Caribbean Sea. It was first described as Pseudopterogorgia bipinnata in 1864 by the American zoologist Addison Emery Verrill. Williams and Chen (2012), transferred all the Atlantic species of Pseudopterogorgia to Antillogorgia.

Pseudoplexaura porosa, commonly known as the porous sea rod or the porous false plexaura, is a species of gorgonian-type colonial octocoral in the family Plexauridae. It is native to the Caribbean Sea and the Gulf of Mexico.

Cladiella australis is a species of soft coral in the Alcyoniidae family. It is found in the western Indo-Pacific. It is commonly known as the finger blanching soft coral because with the polyps extended it appears brown but when poked with a finger, the polyps retract into the leathery base tissue and the coral appears white.

Clavulariidae is a family of soft corals in the suborder Stolonifera. Colonies in this family consist of separate retractable polyps growing from a horizontal, encrusting stolon or basal membrane. The tissues are stiffened by sclerites.