The men's 4 × 400 metres relay competition at the 2012 Summer Olympics in London, United Kingdom. The event was held at the Olympic Stadium on 9–10 August. [1] It was won by the Bahamas.

The qualifying round experienced more drama than is normal in these affairs. In the first heat, on the second leg, Kenya's Vincent Mumo Kiilu was boxed in near the back of the pack, with South Africa's Ofentse Mogawane on his shoulder. Coming into the home straight, Kiilu tried to step to the outside, tripping Mogawane, leaving him injured on the track. The much awaited return of Oscar Pistorius waiting to run the third leg never materialized. South Africa filed a protest in which Kenya was disqualified and South Africa was allowed to run in the final. [2] Conveniently, the London Olympic Stadium track has 9 lanes to accommodate such a circumstance, while normally only 8 lanes are used in Championship meets.

Ofentse Mogawane is a South African sprinter who specializes in the 400 meters.

Oscar Leonard Carl Pistorius is a South African former sprint runner. In 2015 he was convicted of the 2013 murder of his girlfriend Reeva Steenkamp.

At the finish of the first heat, Trinidad and Tobago won the heat, setting their National Record, but host Great Britain was given exactly the same time.

In the second heat the United States led off with Manteo Mitchell. Halfway around the track, Mitchell heard a crack and felt pain.

Manteo Mitchell is an American athlete who specializes in the 200m and 400m. He was a member of the USA team that won the gold medal in the Men's 4×400 metres relay at the 2012 IAAF World Indoor Championships.

“It felt like somebody literally just snapped my leg in half. I felt it break.’’

Mitchell continued to the hand off, running a sub-par 46.1 split. It was later revealed that Mitchell did break his left fibula. [3] His American teammates continued on, running three sub 45 splits. Bahamas won the heat, but the Americans qualified, credited with exactly the same time as Bahamas, the fastest time in 2012. Both heats ending with the first and second place teams running the same times.

Also during the second heat, the Dominican Republic failed to make the second exchange between Felix Sánchez and Joel Mejía within the zone and were disqualified. [4] Then halfway through the third leg, Jamaica's Jermaine Gonzales pulled a muscle and was unable to continue.

Jermaine Gonzales is a Jamaican 400 metres runner. He is currently being coached by Glen Mills and Bertland Cameron.

In the final, Bahamas started off with their best 400 runners, 4th place Chris Brown and 7th place Demetrius Pinder. Brown had a clear lead through the first 350 metres before fading to hand off just slightly ahead of Bryshon Nellum. Over the next leg, Josh Mance brought the American team into contention, with the two teams separating from the rest of the field. On the final straightaway, Pinder extended the lead slightly, his relay split of 43.3 credited as the 7th (now 9th) fastest relay splits in history. On the third leg, Tony McQuay passed Michael Mathieu early on the back stretch and extended the lead by a few metres. McQuay's split was reported to be 43.4. [5] Last minute fill in Angelo Taylor took the baton in the lead, but Ramon Miller ran up to maintain contact. Coming off the final turn, he moved past Taylor with 50 meters to go and won. Trinidad and Tobago again improved their national record in winning the bronze. [6] It was only the third time an American team had been beaten in the Olympic 4 × 400 metres relay.

Oscar Pistorius ran the anchor leg for the South African team, but they were already well beaten before he received the baton.

The fifth place Russian team was later disqualified when two of its members received doping bans in 2017 after a re-test of their samples.

Prior to the competition [update] , the existing World and Olympic records were as follows.

The Following new National records were set during this competition

Note: *South Africa's Ofentse Mogawane was injured in a collision with Kenya's Vincent Mumo Kiilu and failed to hand over to Oscar Pistorius who was supposed to run the third leg.

a At approximately the 200 metre mark of the first leg, American runner Manteo Mitchell broke his left fibula. However, he still managed to finish his leg with a time of 46.1. [7]

The men's 4x400 metres relay competition at the 2010 IAAF World Indoor Championships was held at the ASPIRE Dome on 13 and 14 March.

Ronell Joshua "Josh" Mance is an American sprinter who specialises in the 400 metres. He attends Florida State University in Tallahassee, Florida, where he has transferred after two years at the University of Southern California.

South Africa competed at the 2012 Summer Olympics in London, United Kingdom, from 27 July to 12 August 2012. This was the nation's eighteenth participation overall and sixth consecutive appearance at the Summer Olympics in the post-apartheid era. The South African Sports Confederation and Olympic Committee (SASCOC) sent a total of 125 athletes to the Games, 67 men and 58 women, to compete in 17 sports. Field hockey and women's football were the only team-based sports in which South Africa were representation at these Olympic games. There was only a single competitor in archery, BMX cycling, judo, shooting and weightlifting.

The women's 4 × 400 metres relay competition at the 2012 Summer Olympics in London, United Kingdom was held at the Olympic Stadium on 10–11 August.

The Men's 4 × 400 metres relay event at the 2011 World Championships in Athletics was held at the Daegu Stadium on 1 and 2 September. Thursday and Friday. This is a change in schedule from previous years when all the relays were at the end of the program. This might necessitate a change in strategy to allow for team members involved in other events.

South Africa competed at the 2012 Summer Paralympics in London with a team of 62 athletes.

Regina George is an American-born Nigerian sprinter who specializes in the 400 metres. She represented Nigeria at the 2012 Summer Olympics and was the silver medallist at the African Championships in 2012.

Willem Frederik Andries de Beer is a South African sprinter who specializes in the 400 metres.

Shane Victor is a South African sprinter who specializes in the 400 metres. He won a silver medal in the 4 × 400 m relay at the 2011 World Championships in Athletics in Daegu.

Shaun de Jager is a South African sprinter. He competed in the 4 × 400 m relay event at the 2012 Summer Olympics. 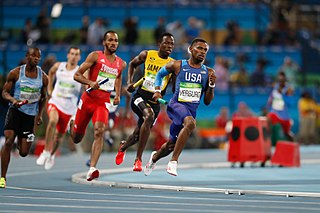 The men's 4 × 400 metres relay competition at the 2016 Summer Olympics in Rio de Janeiro, Brazil was held at the Estádio Olímpico João Havelange on 19–20 August.