Central newspapers of the Soviet Union

The Soviet Union, officially the Union of Soviet Socialist Republics (USSR), was a socialist state in Eurasia that existed from 30 December 1922 to 26 December 1991. Nominally a union of multiple national Soviet republics, its government and economy were highly centralized. The country was a one-party state, governed by the Communist Party with Moscow as its capital in its largest republic, the Russian Soviet Federative Socialist Republic. Other major urban centres were Leningrad, Kiev, Minsk, Alma-Ata, and Novosibirsk. It spanned over 10,000 kilometres east to west across 11 time zones, and over 7,200 kilometres north to south. It had five climate zones: tundra, taiga, steppes, desert and mountains.

Printed media in the Soviet Union, i.e., newspapers, magazines and journals, were under strict control of the Communist Party and the Soviet state. The desire to disseminate propaganda is believed to have been the driving force behind the creation of the early Soviet newspapers. Until recently, newspapers were the essential means of communicating with the public, which meant that they were the most powerful way available to spread propaganda and capture the hearts of the populace. Additionally, within the Soviet Union the press evolved into the messenger for the orders from the Central Committee to the party officials and activists. Due to this important role, the Soviet papers were both prestigious in the society and an effective means to control the masses. However, manipulation initially was not the only purpose of the Soviet Press.

The Doctors' plot was an antisemitic campaign organized by Joseph Stalin. In 1952–1953, a group of predominantly Jewish doctors from Moscow were accused of conspiring to assassinate Soviet leaders. This was later accompanied by publications of anti-Semitic character in the media, which talked about the threats of Zionism and condemned people with Jewish names. Many doctors, officials and others, both Jews and non-Jews, were promptly dismissed from their jobs and arrested. A few weeks after the death of Stalin, the new Soviet leadership stated a lack of evidence and the case was dropped. Soon after, the case was declared to have been fabricated. 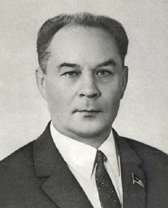 Alexander Nikolayevich Shelepin was a Soviet politician and security and intelligence officer. A long-time member of the Central Committee of the Communist Party of the Soviet Union, he served as First Deputy Prime Minister, as a full member of the Politburo and as the Chairman of the KGB from December 1958 to November 1961. He continued to maintain decisive influence in the KGB until 1967; his successor as KGB Chairman, Vladimir Semichastny, was his client and protégé.

Moskovskij Komsomolets is a Moscow-based daily newspaper with a circulation approaching one million, covering general news. Founded in 1919, it is now regarded as publishing sensational or provocative items on Russian politics and society.

The Young Guard was an underground anti-fascist Komsomol organization, in the German-occupied Soviet city of Krasnodon. They were active during World War II, until January 1943. They carried out several acts of sabotage and protest before being destroyed by German forces. Most members of the Young Guard, about 80 people, were tortured and then executed by the Germans.

The League of Militant Atheists ; Society of the Godless ; Union of the Godless, was an atheistic and antireligious organization of workers and intelligentsia that developed in Soviet Russia under the influence of the ideological and cultural views and policies of the Communist Party of the Soviet Union from 1925 to 1947. It consisted of party members, members of the Komsomol youth movement, those without specific political affiliation, workers and military veterans.

Sovetsky Sport is a Russian national daily sports newspaper. Between 1924 and 1946 the newspaper was called Red Sports, it was not printed between 1928 and 1932.

Oleg Vasilyevich Koshevoy was a Soviet partisan and one of the founders of the clandestine organization Young Guard, which fought the Nazi forces in Krasnodon during World War II between 1941 and 1945.

Sovetskaya Latviya was a major Russian-language newspaper in the Latvian SSR.

KP is a Ukrainian newspaper published six times a week in Kiev, the nation's capital. It is a Russian language newspaper with some regional editions in the Ukrainian language. 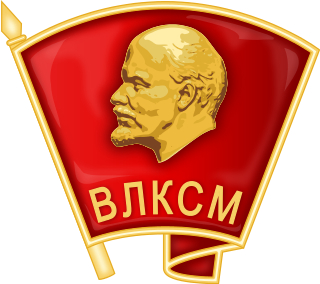 The All-Union Leninist Young Communist League, usually known as Komsomol, was a political youth organization in the Soviet Union. It is sometimes described as the youth division of the Communist Party of the Soviet Union (CPSU), although it was officially independent and referred to as "the helper and the reserve of the CPSU". 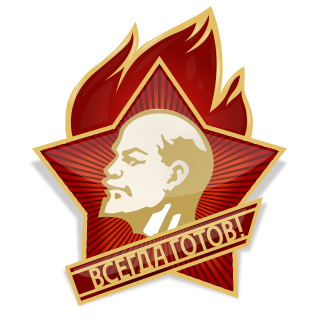 The Vladimir Lenin All-Union Pioneer Organization, abbreviated as or the Young Pioneers, was a mass youth organization of the Soviet Union for children of age 9–15 that existed between 1922 and 1991. Similar to the Scouting organisations of the Western world, Pioneers learned skills of social cooperation and attended publicly funded summer camps.