LRT is the largest media group in Lithuania and is owned by the public. Therefore, its fundamental mission is to serve the public interest and the public’s right to trustworthy and objective information. Radio and television services are now operating from LRT headquarters in Vilnius.

The Lithuanian Radio started regular broadcasting on June 12th, 1926. The television service has been broadcasting since April 30th, 1957. In 1965, radio broadcasts were started in English. In 1975, the first coloured programme from LRT was broadcast. Radio and television services are now operating from LRT headquarters in Vilnius, the capital of Lithuania. At the end of 2019, LRT employed approx. 600 people. [1] In May 2007 LRT started a project of converting all of its films, including some five thousand hours of cinefilm and some 30,000 hours of videotapes to digital. The oldest entry dates back to 1895.

LRT comprises seven media channels broadcasting nation-wide. The content of all the channels is integrated and shared across all three platforms: television, radio, and on-line (web-portal and LRT's accounts on social media networks). LRT produces around two-thirds of its content in-house, while one third is commissioned from external producers. [2]

In delivering international news coverage, LRT cooperates with private and public media, including Deutsche Welle, Voice of America, Radio Free Europe/Radio Liberty, and others. LRT was admitted as a fully active member of the European Broadcasting Union on 1 January 1993. From the restoration of independence in 1991 to 31 December 1992, LRT was a member of the International Radio and Television Organisation.

The LRT Council is the highest governing institution of LRT. The Council supervises the implementation of the LRT mission, approves the annual income and spending by LRT administration. The Council comprises twelve members prominent in social, scientific and cultural fields, appointed for six-year terms.

LRT operations are funded by taxpayers. LRT budget depends directly on taxes collected in the year before the last. The state allocates 1.5 percent of the personal income tax and 1.3 percent of the collected excise duties. The LRT's budget for 2019 stood at 41.65 million euros. Budget project for 2020 envisages allocating 46.30 million euros for LRT. [4]

LRT TV and radio live broadcasts are accessible globally on LRT.lt (except for the foreign content the broadcast of which in other countries is restricted by authors rights).

LRT may stand for:

Television in Latvia was first tested in 1937 and introduced in 1954. Latvia was the first country in the Baltic States which started broadcasting.

Lithuania returned to the Eurovision Song Contest in 1999, having withdrawn after their debut entry in 1994. Lithuania's second Eurovision entry came from Aistė, who performed "Strazdas" at the 1999 Contest in Jerusalem. "Strazdas" was performed in Samogitian, a dialect of Lithuanian.

Before the independence from the Soviet Union (USSR) in 1990, Lithuanian print media sector served mainly as a propaganda instrument of the Communist Party of Lithuania (LKP). Alternative and uncontrolled press began to appear in the country starting from 1988, when the Initiative Group of the Reform Movement of Lithuania Sąjūdis was established. After the declaration of independence the government stopped interfering in the media outlets which for the most part were first privatised to their journalists and employees and later to local businessman and companies. Currently media ownership in Lithuania is concentrated among a small number of domestic and foreign companies. 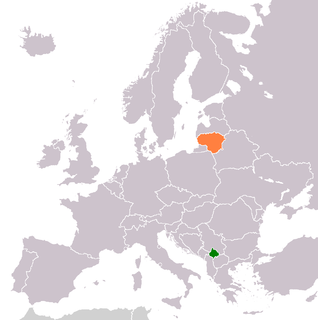 Kosovan–Lithuanian relations involve foreign relations between Kosovo and Lithuania. Kosovo declared its independence from Serbia on 17 February 2008 and Lithuania recognized it on 6 May 2008. Diplomatic relations commenced on 16 July 2008.

LRT Plius is a Lithuanian television station owned and operated by LRT. LRT Plius was launched on 16 February 2003 as 'LTV2', then changed its name to LRT Kultūra on 28 July 2012. Last iteration of this stations name was made on 1 October 2018 to LRT Plius.

LRT Lituanica is the third Lithuanian public television channel, operated by LRT. The channel broadcasts 24 hours per day and is a mix of original programming from LRT televizija and LRT Plius.

LRT Klasika is a Lithuanian radio channel dedicated to culture and classical music and produced by Lithuanian National Radio and Television (LRT). Its programme content in 2012 was made up as follows:

Edita Mildažytė is a Lithuanian journalist, documentarian and social activist, widely known as the host of the longest running talk show in Lithuanian TV history, “Bėdų turgus”, on air since 2001.

Lithuania participated in the Eurovision Song Contest 2016 with the song "I've Been Waiting for This Night" written by Jonas Thander and Beatrice Robertsson. The song was performed by Donny Montell, who previously represented Lithuania in the Eurovision Song Contest 2012 with the song "Love is Blind", placing fourteenth in the final. The Lithuanian broadcaster Lithuanian National Radio and Television (LRT) organised the national final "Eurovizijos" dainų konkurso nacionalinė atranka in order to select the Lithuanian entry for the 2016 contest in Stockholm, Sweden. The national final took place over ten weeks and involved 28 artists initially competing in two different competitive streams: artists that applied with a song and artists that were matched with a song from the song submissions LRT received because they did not have a song. The results of each show were determined by the combination of votes from a jury panel and a public vote. In the final, six artists and songs remained and "I've Been Waiting For This Night" performed by Donny Montell was selected as the winner.

Lithuania participated in the Eurovision Song Contest 2017. The artist and song that represented Lithuania in the 2017 contest were selected through a national final, „Eurovizijos“ dainų konkurso nacionalinė atranka, organised by the Lithuanian broadcaster Lithuanian National Radio and Television (LRT), culminating in a final on 11 March 2017.

Lithuania originally planned to participate in the Eurovision Song Contest 2020. The Lithuanian broadcaster LRT televizija (LRT) organised the national final Pabandom iš naujo! to select the Lithuanian entry for the 2020 contest in Rotterdam, Netherlands. However, the Eurovision contest was cancelled due to the COVID-19 pandemic.