MTV3 (Finnish : MTV Kolme, Swedish : MTV Tre) is a Finnish commercial television station. It had the biggest audience share of all Finnish TV channels until Yle TV1 (from Yle) took the lead. The letters MTV stand for Mainos-TV (literally "Advertisement-TV", i.e. "Commercial TV [1] ), due to the channel carrying advertising for revenue. Number 3 was added later, when the channel was allocated the third nationwide television channel and it generally became known as "Channel Three"—Finnish Broadcasting Company’s Yle TV1 and Yle TV2 being the first two—and also to distinguish it from the later MTV Finland, which is a Finnish version of ViacomCBS's MTV channel. From 1957 until 2001, the channel's logo was a stylised owl, changed to an owl's eye after an image renewal in 2001, which was then used until 2013. MTV3 has about 500 employees. It is also known as Maikkari (a slang of word "Mainos-TV").

MTV3 was launched on 13 August 1957, [2] the first commercial television network in Finland, [3] and one of the earliest nationwide commercial TV stations in Europe. In Finland it was preceded by the regional TES-TV commercial channel. It was originally known as MTV (Mainostelevisio) with programmes broadcast on the two channels of Yle. MTV was allocated its own channel after 1986, when Kolmoskanava (TV3) was born as a joint venture between Yle, MTV, and Nokia. MTV3 was born in 1993 when MTV took over the shares of TV3 from Yle and Nokia and MTV programming switched from the Yle frequencies to the TV3 transmitters. The same year MTV Oy was admitted as a full active member of the European Broadcasting Union. This membership ended in 2019. [4]

In 2005 Alma Media sold MTV3 and its sister channels (MTV3+, Subtv, Radio Nova and a share in Urheilukanava) to Swedish Bonnier. [5] In 2018 Bonnier sold the channel to the Swedish telecommunication enterprise Telia. [6]

MTV3 broadcasts every day from morning to small hours. The pre-dawn hours are allocated to a SMS-based online chat.

Much of the output of MTV3 is a mixture of Finnish versions of popular program formats and of American and British imports. However, MTV3 has also its own Finnish programming. For example, many of Spede Pasanen's productions were produced for MTV3. [7]

MTV3 brought the first daily soap opera to Finland, by showing the American The Bold and the Beautiful , [9] which in 1990s became the most popular show on the channel. In 1999, MTV3 started showing Finnish daily soap opera Salatut elämät . [10]

Yle Fem was Yle's Finland-Swedish national television channel, providing television programmes in the Swedish language in Finland. It was a public-service channel principally intended for Finland's Swedish-speaking minority. Creating understanding over the language and culture border was also one of the channel's recognized objectives. 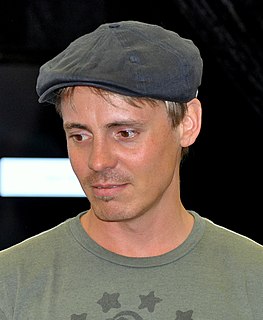 Joona Jasper Pääkkönen is a Finnish film actor and entrepreneur. 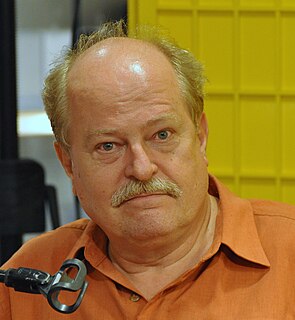 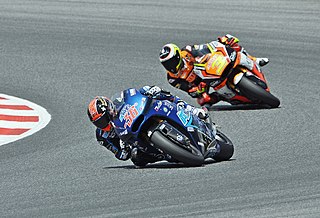 Mika Kallio is a Finnish Grand Prix motorcycle racer. He debuted in the 125cc World Championship with the Finnish rookie team Ajo Motorsport in 2001 and was awarded the "Rookie of the Year" in 2002. After moving to Red Bull KTM during the 2003 season, he finished runner-up in the class in 2005 and 2006. 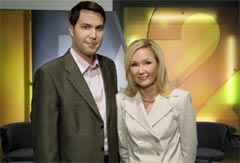 Ajankohtainen kakkonen was a Finnish current affairs television series broadcast in Finland on Yle TV2 from 1969 to 2015. Aired every Tuesday at 21.00 EET.

Esko Kovero is a Finnish actor. He is best known as Ismo Laitela in the Finnish soap opera Salatut elämät (1999–), but he has also appeared in movies and the theatre.

Henna Vänninen is a Finnish actress. She is known for her role as Aamu Korhonen in the popular Finnish soap opera Salatut elämät.

Sami Uotila is a Finnish male actor, who is known best as Aki Nikkinen from the Finnish TV-series Salatut elämät on MTV3.

C More Max is a Finnish pay television channel owned and operated by MTV Oy. The channel started broadcasting in November 2006 and was originally dedicated to F1 coverage.

Yle Uutiset is the Finnish news production unit of Yle. Yle Uutiset also produces news in Sami, Russian and English. News in the other national language, Swedish, is produced by the unit Svenska Yle.

Kymmenen Uutiset is the main news program of MTV3, broadcast daily at 10:00 p.m. 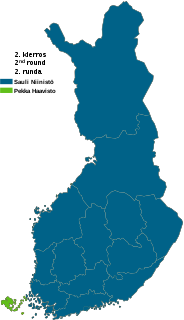 Kotikatu is a Finnish drama television series which aired on Yle TV1 from August 24, 1995 to December 7, 2012. Kotikatu was titled as "a semi-soap opera". 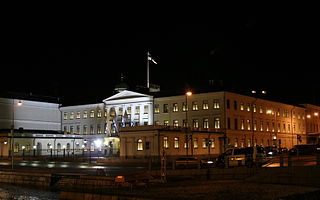 The Independence Day Reception is an annual event organised by the President of Finland at the Presidential Palace in Helsinki on 6 December, Finland's Independence Day. Invitations are sent to all members of parliament and other representatives of the national and municipal governments, the ambassadors to Finland, representatives of NGOs, important business people, and people who distinguished themselves during the year in the arts, sports, sciences, and other fields.

Nora Rinne is a Finnish actress. She is best known for her role of Camilla Mustavaara in the Finnish soap opera Salatut elämät, a role she has portrayed intermittently since 2001.

Inspector Palmu's Mistake is a 1940 Finnish detective novel by Mika Waltari. It is the second book of the Inspector Palmu series after the first book, Who Murdered Mrs Skrof?. The protagonist of the book, like his predecessor, is Inspector Frans J. Palmu, who sets out to investigate a rich victim who appears to be died in an accident, but which is revealed to be murder.

Jasmin Hamid is a Finnish Tatar actress, politician and investor.