With headquarters in London, United Kingdom, the channel started its broadcast in the Scandinavian countries and after a few years expanded to many East European markets and the Baltic countries with subtitles.

The service was launched in January 2002 as Viasat Explorer in Sweden, Denmark, Norway and Finland. [1] On 1 November 2003 it expanded into Ukraine, Russia, Kazakhstan, Estonia, Latvia, Lithuania, Moldova, Belarus, Hungary, Poland, Romania and Bulgaria. In 2006, all Serbian cable operators and their satellite platform, Total TV began with broadcasting this channel. [2]

Since 2012, Viasat Explorer together with sisterchannels Viasat History and Viasat Nature are broadcast in HD together with the SD feed on the Viasat satellite platform. The channel was rebranded as Viasat Explore on 29 April 2014, gaining a new ident package and logo and dropping the "X" letter from its logo in flavour of an "E". 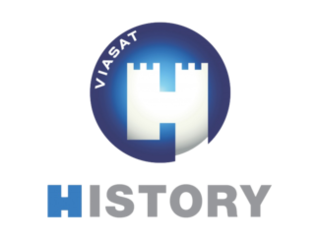 Viasat History is a pay television channel owned by Swedish media company, Viasat World LTD. The channel broadcasts history series from around the world with a focus on the ancient world, historical drama, royal history, travel history and religious history. Viasat History is a 24-hour channel, broadcasting in Central and Eastern Europe, Russia and Commonwealth of Independent States.

TV1000 East is a movie television channel targeting the Baltic countries, Russia, Kazakhstan and other Eastern European countries. It is owned by the international broadcaster Viasat World and was launched in 2003 by Swedish media conglomerate Modern Times Group now the Nent Group. TV1000 East was rebranded in December 2009.

Viasat Sport East is a television channel available in Russia and the CIS countries. The channel heavily features American sports such as the National Hockey League and Major League Baseball.

Peretz is a Russian federal television channel, broadcasting original entertainment programming along with popular Russian and Western series. It began broadcasting on 7 June 1999 as "Darial-TV", rebranded in 2007 to "DTV", and finally took its current name in 2011. It broadcasts in over 400 cities in Russia. Technical penetration of the channel is 72.5%.