Discovery Channel (often referred to as simply Discovery) is a Danish television channel.

The Discovery Channel has been available to Danish viewers since 1989, but started becoming increasingly localised during the 2000s. For example, they have increasingly started broadcasting programmes in Danish. [1]

Since TNS Gallup started measuring viewing for the channel in 2002, the channel has continuously held a 1.3 percent share of all viewing. 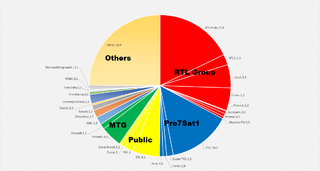 Discovery Channel is the Swedish language version of the Discovery Channel, using a "factual entertainment" concept similar to the original American channel. As of 2006, it was the eighth most watched channel in Sweden (MMS).

Animal Planet is a Polish television channel and was launched in Poland in October 1997. From the very beginning the channel broadcast documentaries devoted to animals and wildlife. The broadcast of the channel was created specially for the needs of the Polish market.

Discovery Channel is a Dutch television channel airing in the Netherlands. Its primary target is men aged 25–39.

The Pan-European Animal Planet is a feed of Animal Planet, which broadcasts to several countries in Europe, Africa and the Middle East.

Discovery Life is a Polish television channel owned by Discovery Networks Europe, which produces documentary, feature and entertainment films and series. In Poland, the channel replaced Animal Planet in SD quality on 1 February 2015. At the time of launch, the station was available in 55.5% of households in Poland. On 16 January 2017, Discovery Life began broadcasting in HD quality, replacing the previously released SD version.