Discovery Channel Romania was a television channel in Romania.

The dedicated channel for Romania was launched in 2006. [2] [3] At the same time Discovery Networks Europe opened a local office in Bucharest. [4] Before this, Romania had received a pan-regional feed of the Discovery Channel.

The channel adopted the new Discovery logo on July 1, 2009 along with its sister channels in Central Europe. [5]

TAROM is the flag carrier and oldest currently operating airline of Romania, based in Otopeni near Bucharest. Its headquarters and its main hub are at Henri Coandă International Airport. It is currently the first and largest airline operating in Romania based on international destinations, international flights and the third-largest measured by fleet size and passengers carried.

Pro TV is a Romanian free-to-air television network, launched in December 1995 as the third private TV channel in the country. It is owned by CME, which is 75% owned by WarnerMedia.

The A1 motorway is a partially built motorway in Romania, planned to connect Bucharest with the Banat and Crișana regions in the western part of the country and the rest of Europe. When completed it will be 580.2 kilometers long and it will span the country on the approximative south-east to north west direction. The motorway starts in the western part of Bucharest and connects the following major cities: Pitești, Sibiu, Deva, Timișoara, Arad, reaching Hungary's M43 motorway near Nădlac. As the motorway is built along the Trans-European Transport Networks Rhine-Danube Corridor the construction receives 85% funding from the European Union. The road is part of the proposed Via Carpatia route. 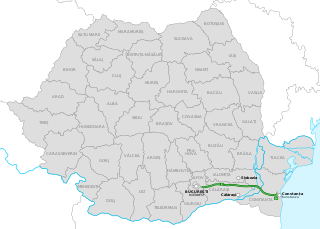 The A2 motorway, also known as The Motorway of the Sun, is a motorway in Romania which links Bucharest with Constanța, a city-port on the shore of the Black Sea, where it merges after an interchange into the A4 motorway. It is 206 km long, and has been operational on its entire length since November 2012.

U Craiova 1948, commonly known as FCU Craiova, is a Romanian professional football team based in Craiova, Dolj County, currently playing in Liga I. 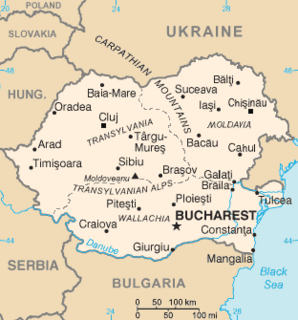 The unification of Romania and Moldova is a popular concept in the two countries beginning with the late 1980s, during the collapse of communism. The Romanian Revolution in 1989 and the independence of Moldova in 1991 further contributed to the development of a movement for the unification of the two Romanian-speaking countries. The question of reunification is recurrent in the public sphere of the two countries, often as a speculation, both as a goal and a danger. The idea is widespread in Romania but has been opposed by most Moldovans according to polls in recent years. However, a poll in April 2021 found that 50% of Moldovans would support unification if local salaries and pensions became the same as those in Romania, while 43% would remain opposed.

Ciprian Ioan Deac is a Romanian professional footballer who plays as a winger or an attacking midfielder for Liga I club CFR Cluj.

Digi Communications, also known as RCS & RDS, is a Romanian telecommunication holding company operating in Romania, Hungary, Spain and Italy. Digi was founded by Zoltán Teszári, who is the majority owner, and it is listed on the Bucharest Stock Exchange since 16 May 2017.

JimJam is an international children's preschool television channel which originally launched in Italy on Sky in 2006.

The Port of Constanța is located in Constanța, Romania, on the western coast of the Black Sea, 179 nautical miles (332 km) from the Bosphorus Strait and 85 nmi (157 km) from the Sulina Branch, through which the Danube river flows into the sea. It covers 3,926 ha, of which 1,313 ha is land and the rest, 2,613 ha is water. The two breakwaters located northwards and southwards shelter the port, creating the safest conditions for port activities. The present length of the north breakwater is 8.344 m (27.38 ft) and the south breakwater is 5.560 m (18.24 ft). The Port of Constanța is the largest on the Black Sea and the 17th largest in Europe. Cluj Arena is a multi-purpose stadium in Cluj-Napoca, Romania. It serves as the home of Universitatea Cluj of the Liga II and was completed on 1 October 2011. It is also the home of the Untold Festival. The facility, owned by the county council of Cluj, can also be used for a variety of other activities such as track and field events and rugby union games. It replaced the Stadionul Ion Moina, which served as Universitatea Cluj's home from 1919 until the end of the 2007-08 season.

Elena Alexandra Apostoleanu, known professionally as Inna, is a Romanian singer and songwriter. Born in Mangalia and raised in Neptun, she studied political science at Ovidius University before meeting the Romanian trio Play & Win and pursuing a music career. She adopted the stage name "Alessandra" in 2008 and adopted a pop-rock style; later that year, she changed her stage name to "Inna" and began releasing house music. "Hot" (2008), her debut single, was a commercial success worldwide and topped the Romanian and Billboard's Hot Dance Airplay chart, among others. Inna's debut studio album of the same name followed in August 2009 and was certified Gold and Platinum. It featured several other successful singles in Europe, including "Amazing" (2009), her second number one single in Romania.

Liga IV Maramureș is the regional Liga IV football division for clubs in Maramureș County, România, the fourth tier of the Romanian football league system. It is organized by the County Football Association and is competed amongst 24 teams divided into 2 series, the winner is promoted to Liga III after a promotion play-off.

The Alliance for the Union of Romanians is a right-wing populist and nationalist political party currently active in Romania and Moldova. It was founded on 19 September 2019. This was done with the intention of participating in the 2020 Romanian local and legislative elections. Today, the party has two co-presidents, George Simion and Claudiu Târziu.