For 43 years it was the official party newspaper of the Socialist Unity Party of Germany (SED), which governed East Germany (officially known as the German Democratic Republic) as a dictatorship, and as such served as one of the party's most important organs. It originally had a Stalinist political stance; it retained a Marxist-Leninist stance until German reunification in 1990. [2] The Neues Deutschland that existed in East Germany had a circulation of 1.1 million as of 1989 and was the communist party's main way to show citizens its stances and opinions about politics, economics, etc. It was regarded by foreign countries as the communist regime's diplomatic voice.

Since the fall of communism, the Neues Deutschland has lost 98 percent of its readership and has a circulation of 18,595 as of 2020. Between 2019 and 2020 the number of sold copies and subscriptions declined 14.8 percent. [1] Since 1990 the newspaper has changed its political outlook and now has a democratic socialist political stance. The newspaper is both politically and financially tied to one of its part owners, The Left (Die Linke), which owns the publishing house and printing presses.

ND was formed in 1946 [3] as a Lizenzzeitung after the Social Democratic Party of Germany (SPD) and the Communist Party of Germany (KPD) were forcibly merged to form the SED in the Soviet occupation zone of Germany. The first edition of ND was published on 23 April 1946 in conjunction with the founding of the SED. ND replaced the SPD organ Das Volk and the KPD organ Deutsche Volkszeitung . Karl Maron was the first chief editor of the daily and served in the post until 1950. [3]

Before the reunification of Germany in October 1990, ND had a circulation of a million and was second only to the youth newspaper junge Welt in readership. During this period the editor-in-chief of ND was Wolfgang Spickermann. [4] However, it has been claimed that Neues Deutschland failed to reach much of the East German population. [5]

After reunification, ND's readership diminished greatly. In 2020, ND had a circulation of 18,595. While most large newspapers in Germany have a problem with declining circulation, ND is particularly vulnerable in that the majority of its readers are over 60 years old. ND produces both a national edition and regional editions for Berlin and Brandenburg.

Jürgen Reents, who has political roots in both the Party of Democratic Socialism and the Green Party, has been the editor in chief of ND since 1999. One of his major goals has been to transform ND's image from a propaganda leaflet to a more respected newspaper. In October 2005 the editors moved from Elsenbrücke to Franz-Mehring Platz in Berlin. Three months later, Olaf Koppe took over management of the newspaper.

ND is now oriented towards a democratic socialist viewpoint and is owned partially by The Left party. The twin goals of the newspaper are to give those in eastern Germany a voice and to represent the democratic socialist viewpoint without being the organ of The Left or any other political party. While eastern German themes dominate the features and the community pages, the political section looks at leftist politics throughout Germany. Authors and politicians from diverse political backgrounds have also been represented on the pages of the newspaper. For example, Friedrich Schorlemmer, a known critic of The Left party and the political left in general, has been a guest writer.

Other traditional sections of a newspaper are also included, such as an advice page, a television guide, notifications and classifieds, opinion columns, and theme sections dealing with health, environment, and other issues. The letters to the editor are often cited as examples of viewpoints of the Left party from other media sources. As with most daily German newspapers, ND is published daily Monday through Friday, with a weekend edition published on Saturdays. 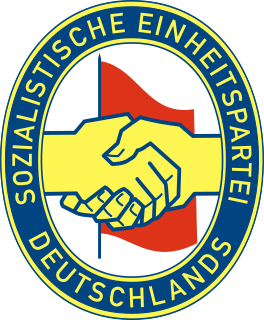 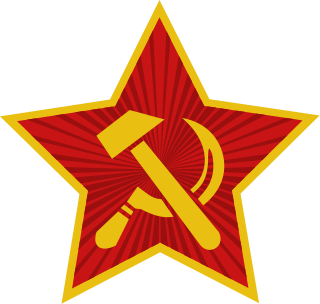 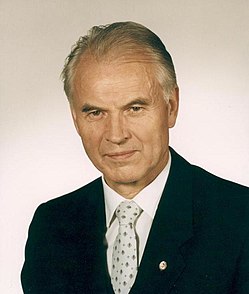 The German Communist Party is a minor communist party in Germany. The DKP supports left positions and was an observer member of the European Left. At the end of February 2016 it left the European party.

Junge Welt is a German daily newspaper, published in Berlin. The jW describes itself as a left and Marxist newspaper. German authorities categorize it as a far-left medium hostile to the constitutional order.

The German Democratic Republic was created as a totalitarian socialist republic on 7 October 1949 and began to institute a government based on the government of the Stalinist Soviet Union. The equivalent of the Communist Party in East Germany was the Sozialistische Einheitspartei Deutschlands, which along with other parties, was part of the National Front of Democratic Germany. It was created in 1946 through the merger of the Communist Party of Germany (KPD) and the Social Democratic Party of Germany (SPD) in the Soviet Occupation Zone of Germany. Following German reunification, the SED was renamed the Party of Democratic Socialism (PDS), which eventually merged with the West German Electoral Alternative for Labor and Social Justice to form the modern Left Party.

The Communist Party of Germany is a minor political party in Germany. It is one of several parties which claim the KPD name and/or legacy. It was founded in Berlin in 1990.

Wilhelm Koenen was a communist and an East German politician. He was married to Emmy Damerius-Koenen and was the father of Heinrich Koenen and Johanna Koenen. 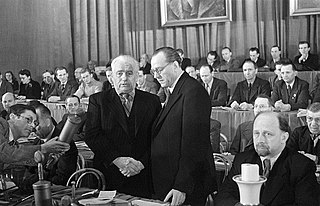 Das Volk was a daily newspaper published from Berlin, Germany. It was the central organ of the Social Democratic Party of Germany (SPD). The first issue of Das Volk was published on 7 July 1945. Das Volk was the second working class-newspaper to emerge in Berlin after the Second World War. During its first twenty days of publishing, Das Volk was printed in Berliner format. Das Volk heeded the calls of the Communist Party of Germany (KPD) for building an anti-fascist democratic Germany, a parliamentary-democratic republic and unity of the working class. The newspaper was controlled by the left-wing tendency inside SPD, and supported merger of the party with KPD.

Deutsche Volkszeitung was a newspaper published daily from Berlin, Germany 1945-1946. It was the organ of the Central Committee of the Communist Party of Germany (KPD).

Leonhard Helmschrott (born 5 June 1921 ; died 28 October 2011 was a German journalist and politician. He was a founding member of the National Committee for a Free Germany . Between 1948 and 1989 he was the chief editor of the Bauernecho . 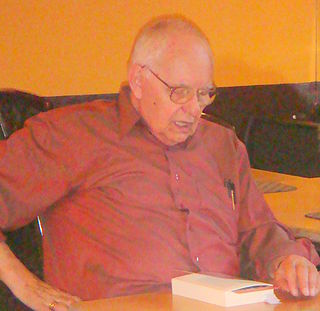 Klaus Huhn was a German sports journalist, writer and sports administrator. Huhn worked for the East German mass-market daily newspaper, Neues Deutschland, and was chairman of the Sports Journalists Sub-Association within that country's important Union of Journalists.

Lieselotte Thoms-Heinrich was a journalist and officially mandated feminist. Between 1968 and 1981 she was editor in chief of the mass circulation women's magazine, "Für Dich". She was also a member of the national parliament ("Volkskammer") between 1963 and 1981.

Brigitte Zimmermann is a German journalist. Between 1983 and 1991 she was editor in chief of Wochenpost, East Germany's top selling weekly newspaper.

Helga Mucke-Wittbrodt was a German physician. For nearly forty years she was the medical director at the East German Government Hospital. In connection with this, for forty years she was a member of the National legislature ("Volkskammer"), representing not a political party but the Democratic Women's League . Although her medical abilities were evidently well attested, the length of her tenure at the hospital and the number of national honours that she accumulated over the years indicate that she was also highly prized by the authorities for her discretion and "political reliability".