A foreign area officer (FAO) is a commissioned officer from any of the six branches of the United States Armed Forces who is a regionally focused expert in political-military operations. Such officers possess a unique combination of strategic focus and regional expertise, with political, cultural, sociological, economic, and geographic awareness. [1] Foreign language proficiency is necessary in at least one of the dominant languages in their specified region.

A FAO will typically serve overseas tours as a defense attaché, a security assistance officer, or as a political-military planner in a service's headquarters, Joint Staff, Major Commands, Unified Combatant Commands, or in agencies of the Department of Defense. They also serve as arms control specialists, country desk officers, liaison officers, and Military Personnel Exchange Program (MPEP) officer to host nation or coalition allies. Recently, increasing numbers of FAOs are serving as political and cultural advisors to combatant staffs in support of the Iraq War and War in Afghanistan. Presently, there are just over 2,200 FAOs in active operational capacities, while roughly 25 percent are still in training. The services plan to recruit and train more than 170 a year, with almost 1,100 new FAOs entering the program between 2005 and 2014. [2]

The Army Foreign Area Officer Program (Functional Area 48) is a single-track FAO program managed by G-35, DAMO-SSF, which is the Strategic Leadership Division. It is by far the largest and oldest FAO program of the Services. The Proponent Office is responsible for establishing policy guidance and FAO career field development as well as establishing specific programs focused on the accession, training, education, distribution, utilization, deployment, and separation of FAOs. Currently, there are ~1,200 Army FAOs either in training or fully qualified.

Army FAOs are categorized by areas of concentration that correspond with their respective military occupational specialty, further grouped in scope by functional areas. Army FAOs are divided into eight categories of regional areas of expertise and language skills: [3]

The Army Reserve has a small corps of FAOs who mostly serve in operational and back-up roles at the Defense Attaché Service as Reserve A/ARMAs, and at the Geographical Combatant Commands as Pol-Mil Officers and Country Desk Officers. Selection for the Reserve Component (RC) FAO Program is highly selective, with new accessions only chosen to fill identified vacancies at semi-annual selection panels held by Army Human Resources Command with the RC FAO Proponent.

The International Affairs Officer Program replaced the FAO and International Relations Officer Program in the Marine Corps in 2000, which is an umbrella program that governs two separate, but interrelated military occupational specialty: the Foreign Area Officer (994x) and the Regional Affairs Officer (982x) designations. Much like the USAF dual-track system, RAOs are basically FAOs without local language skills. There are approximately 280 FAOs and 80 RAOs in the Marine Corps, distributed amongst the following specialties: [4]

The Navy FAO Branch is a restricted line community of the Navy. [5] The Navy has approximately 350 FAOs either fully qualified or in training. The community is expected to achieve 400 officers by 2019. As with the Army, the Navy has a single-track system, where officers from other Navy communities transfer over to Foreign Area Officer permanently. Navy FAOs are assigned the 1710 designator.

The International Affairs Specialist Program is the Air Force component, and encompasses two officer types: the Foreign Area Officer (previously Regional Affairs Strategist) and Political-Military Affairs Strategist. Both tracks remain under the Air Force Specialty Code 16: 16F for FAO and 16P for PAS. PAS development begins in conjunction with Intermediate Developmental Education, at around 10–12 years of commissioned service, and officers serve in similar positions as FAO officers do, but perform duties that require a broad knowledge of political-military affairs rather than regional expertise with foreign language skills. [6] FAO officers require language skills and follow a more intensive, regionally focused pipeline with the following subcategories: [7]

FAOs start their training earlier due to their more intensive training pipeline, typically between 7–10 years of commissioned service, and will serve in alternating FAO and primary career field positions for the remainder of their career. PAS officers will only serve one tour as a PAS before moving back to their primary AFSC. FAOs are required to maintain their language skills at or above a minimum level (ILR scale reading 2/listening 2/speaking 1+) for the remainder of their career.

Acceptance into the FAO programs typically requires at least 7–10 years of commissioned service, since most FAO positions are designated for that of a field-grade officer (Marines being the exception, who only require 3 years). Generally speaking, applicants must have at a minimum the following:

FAO training varies (depending candidate's skills at selection), but usually takes a minimum of 3–5 years before FAOs are qualified for operations:

Standard requirements for full-qualification as a FAO generally include the following:

Unlike its Active Component (AC) counterpart the Army RC FAO Program only selects branch-qualified officers who already possess 2/2 or better language qualifications with matching regional experience, Master's degrees, and at least Phase 2 their common core of Intermediate Level Education completed. As such, these officers tend to have had substantial international experience in their civilian careers that augments the military backgrounds of their AC FAO colleagues.

The Defense Language Office ensures a strategic focus on meeting present and future requirements for language and regional expertise, among military and civilian employees. This office's main responsibilities are to oversee and manage the implementation of a comprehensive Department-wide Language Transformation Roadmap; identify policy, procedural, and resource needs associated with providing needed language capability; oversee policy regarding the development, management, and utilization of civilian employees and members of the Armed Forces; and conduct research and analyze studies, reports, and lessons learned from the Global War on Terrorism and current military operations as they pertain to language and regional area expertise. 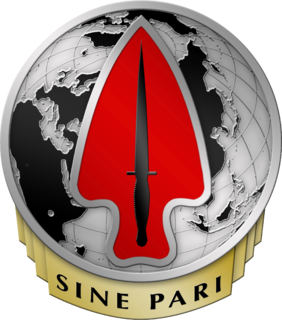 Civil Affairs (CA) is a term used by both the United Nations and by military institutions, but for different purposes in each case.

The Medical Corps (MC) of the U.S. Army is a staff corps of the U.S. Army Medical Department (AMEDD) consisting of commissioned medical officers – physicians with either an M.D. or a D.O. degree, at least one year of post-graduate clinical training, and a state medical license.

The United States Africa Command, is one of the eleven unified combatant commands of the United States Department of Defense, headquartered at Kelley Barracks, Stuttgart, Germany. It is responsible for U.S. military operations, including fighting regional conflicts and maintaining military relations with 53 African nations. Its area of responsibility covers all of Africa except Egypt, which is within the area of responsibility of the United States Central Command. U.S. AFRICOM headquarters operating budget was $276 million in fiscal year 2012.

The George C. Marshall European Center for Security Studies is a bi-national United States Department of Defense and Federal Ministry of Defence (Germany) security and defense studies institute. When the Marshall Center was founded in 1993, its mission was to create a more stable security environment by advancing democratic institutions and relationships, especially in the field of defense; promoting active, peaceful, security cooperation; and enhancing enduring partnerships among the nations of North America, Europe, and Eurasia. As of Oct. 1, 2014, the Marshall Center's regional mission changed to a transnational one based on an Office of the Secretary of Defense directive to change from a European to a global participants' base.

The 97th Civil Affairs Battalion (Airborne) is a civil affairs battalion of the 95th Civil Affairs Brigade (Airborne) based at Fort Bragg, North Carolina. It is a member of the only active duty Special Operations Civil Affairs unit in the United States Department of Defense. The concept for a Civil Affairs brigade had been under consideration for years, but was finally approved as a result of the 2006 Quadrennial Defense Review.

The Maritime Civil Affairs and Security Training Command (MCAST) provides personnel, trains, equips and deploys U.S. Navy sailors for a task force commander to establish and enhance relations between military forces, governmental and nongovernmental organizations and the civilian populace. Accomplished in a collaborative manner across the spectrum of operations in the maritime environment, MCAST Command executes civilian to military operations and military to military training, as directed, in support of security cooperation and security assistance requirements.

The United States European Command State Partnership Program, according to its own mission, is a National Guard program that "links U.S. states with designated partner countries to ... support the command’s security cooperation objectives." Currently, 22 Partnerships exist "with former Soviet, Yugoslav and Warsaw Pact countries in the EUCOM Area of Responsibility." Becoming independent on the dissolution of the Soviet Union on December 26, 1991, these countries shortly requested the advice and assistance of the United States in creating new self-defense forces.

A Bilateral Affairs Officer is a United States Army or Air National Guard officer serving as a conduit between the state and a 'partner country' as part of the National Guard State Partnership Program. The position is considered a diplomatic level assignment.