United States Northern Command (USNORTHCOM) [7] is one of eleven unified combatant commands of the United States Department of Defense. The command is tasked with providing military support for non-military authorities in the U.S., and protecting the territory and national interests of the United States within the continental United States, Puerto Rico, Canada, Mexico, The Bahamas, and the air, land and sea approaches to these areas. It is the U.S. military command which, if applicable, would be the primary defender against an invasion of the U.S.

According to the UCP, Northern Command's mission is to: [11]

USNORTHCOM's Area of Responsibility (AOR) includes air, land and sea approaches and encompasses the continental United States, Canada, Mexico and the surrounding water out to approximately 500 nautical miles (930 km). It also includes the Gulf of Mexico, the Straits of Florida, portions of the Caribbean region to include The Bahamas, Puerto Rico, the U.S. Virgin Islands, the British Virgin Islands, Bermuda, and the Turks and Caicos Islands. [12] The commander of USNORTHCOM is responsible for theater security cooperation with Canada, Mexico, and The Bahamas. [13] In May 2011, NORTHCOM was mobilized in the wake of the BP oil spill in the Gulf of Mexico [14] to provide air, ground, and logistical support. [15] In October 2014, NORTHCOM took administrative control of Alaskan Command. [16]

USNORTHCOM headquarters has approximately 1,200 uniformed and civilian staff. [19] In its first period of organising in 2002–03, one priority was to hire civilian staff which could help respond to a Weapons of Mass Destruction attack and to coordinate disaster recovery. [20]

Note: The National Defense Authorization Act of 2008 stipulates that at least one deputy commander of USNORTHCOM be a National Guard general officer unless the commander is already such an officer. [28] [29]

Northern Command has created several classified "concept plans" (e.g. "Defense Support of Civil Authorities") that are intended to address the 15 National Planning Scenarios that NORTHCOM must be prepared to respond to. [30]

However the GAO found that the national strategy to defend the United States is several years out of date. [31]

In Exercise Vigilant Shield 2008, Northern Command, Pacific Command, the Department of Homeland Security, and numerous law enforcement agencies across the U.S. conducted exercises to test their "response abilities against a variety of potential threats". [34]

The Posse Comitatus Act of 1878 and subsequent Department of Defense policy constrains any member of the United States Army, Air Force, Navy, or Marine Corps, and the National Guard under federal authority from domestically intervening in a law enforcement capacity on United States soil. Several exceptions to the law have been used in the past, including protecting the citizens' constitutional rights in the absence of state and/or local assistance, such as protecting the Little Rock Nine students in Little Rock, Arkansas in 1957, and using the Insurrection Act to quell civil disorders, such as the 1992 Los Angeles riots.

The Military Commissions Act of 2006 lifted many restrictions placed on the military to support non-military authorities by the Posse Comitatus Act, however the United States Supreme Court ruled in June 2008 that significant portions of the MCA were unconstitutional. The "John Warner Defense Authorization Act of 2007" H.R. 5122 (2006) effectively nullified the limits of the Insurrection Act [35] when it was passed; however, the bill was amended in 2008.

On 1 October 2008, the 3rd Infantry Division's 1st Brigade Combat Team was assigned to U.S. Northern Command, marking the first time an active unit had been given a dedicated assignment to Northern Command. The force will be known for the first year as a CBRNE Consequence Management Response Force, and will serve as an on-call federal response force for terrorist attacks and other natural or manmade emergencies and disasters. [36]

North American Aerospace Defense Command, known until March 1981 as the North American Air Defense Command, is a combined organization of the United States and Canada that provides aerospace warning, air sovereignty, and protection for Canada and the continental United States. Headquarters for NORAD and the NORAD/United States Northern Command (USNORTHCOM) center are located at Peterson Space Force Base in El Paso County, near Colorado Springs, Colorado. The nearby Cheyenne Mountain Complex has the Alternate Command Center. The NORAD commander and deputy commander (CINCNORAD) are, respectively, a United States four-star general or equivalent and a Canadian Lieutenant-general or equivalent.

The Posse Comitatus Act is a United States federal law signed on June 18, 1878, by President Rutherford B. Hayes which limits the powers of the federal government in the use of federal military personnel to enforce domestic policies within the United States. The Act was passed as an amendment to an army appropriation bill following the end of Reconstruction and was updated in 1956 and 1981. 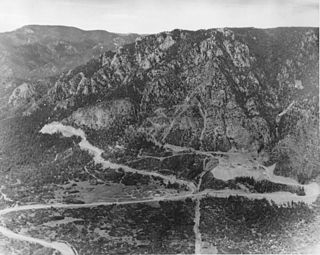 The Cheyenne Mountain Complex is a Space Force installation and defensive bunker located in unincorporated El Paso County, Colorado, next to the city of Colorado Springs, at the Cheyenne Mountain Space Force Station, which hosts the activities of several tenant units. Also located in Colorado Springs is Peterson Space Force Base, where the North American Aerospace Defense Command (NORAD) and United States Northern Command (USNORTHCOM) headquarters are located. 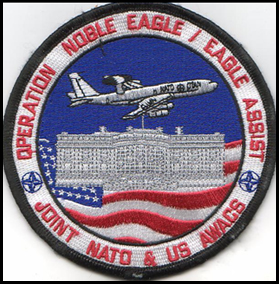 Operation Noble Eagle (ONE) is the United States and Canadian military operation related to homeland security and support to federal, state, and local agencies. The operation began 11 September 2001, in response to the September 11 attacks.

The Department of Defense Civil Disturbance Plan, also known by its cryptonym GARDEN PLOT, was a general US Army and National Guard plan to respond to major domestic civil disturbances within the United States. The plan was developed in response to the civil disorders of the 1960s and fell under the control of the U.S. Northern Command (NORTHCOM). It provided Federal military and law enforcement assistance to local governments during times of major civil disturbances. 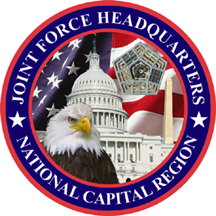 Joint Force Headquarters National Capital Region (JFHQ-NCR) is directly responsible for the homeland security and defense of the Washington D.C. area as well as surrounding counties in Virginia and Maryland. Primarily made up of joint military units within the National Capital Region, the JFHQ-NCR assists federal and local civilian agencies and disaster response teams in the event that the capital area's security is or possibly could be breached by acts of terrorism. Officially activated on September 22, 2004, JFHQ-NCR is part of United States Northern Command. The United States Department of Defense is an executive branch department of the federal government charged with coordinating and supervising all agencies and functions of the government directly related to national security and the United States Armed Forces. The DoD is the largest employer in the world, with over 1.34 million active-duty service members as of June 2022. The DoD also maintains over 778,000 National Guard and reservists, and over 747,000 civilians bringing the total to over 2.87 million employees. Headquartered at the Pentagon in Arlington, Virginia, just outside Washington, D.C., the DoD's stated mission is to provide "the military forces needed to deter war and ensure our nation's security". 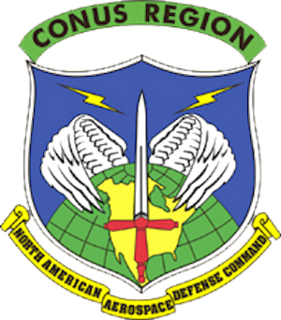 The Continental U.S. NORAD Region (CONR) is a component of the North American Aerospace Defense Command (NORAD) that provides airspace surveillance and control and directs air sovereignty activities for the continental United States (CONUS). CONR is one of three NORAD regions. The two other Regions are the Canadian NORAD Region (CANR) and the Alaskan NORAD Region (ANR). 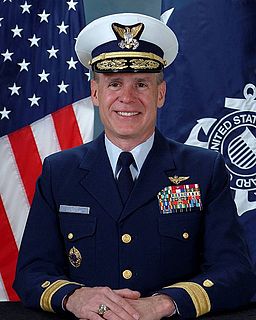 Daniel B. Lloyd is a retired United States Coast Guard Rear Admiral. His last tour of duty in 2011, was as the Director of Joint Interagency Task Force South. Lloyd assumed the duties of Military Advisor to the Secretary, United States Department of Homeland Security, in June 2006. In this role, he was responsible for advising the Secretary on matters involving coordination between the Department of Homeland Security and all branches of the military. 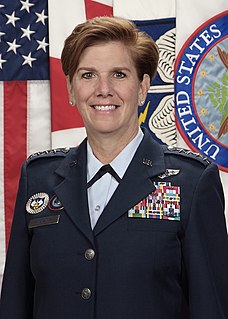 Defense Support of Civil Authorities (DSCA) is the process by which United States military assets and personnel can be used to assist in missions normally carried out by civil authorities. These missions have included: responses to natural and man-made disasters, law enforcement support, special events, and other domestic activities. A recent example of the use of DSCA is the military response to Hurricane Katrina. DSCA is the overarching guidance of how the United States military can be requested by a federal agency and the procedures that govern the actions of the military during employment. 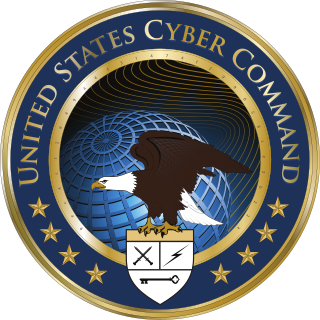 United States Cyber Command (USCYBERCOM) is one of the eleven unified combatant commands of the United States Department of Defense (DoD). It unifies the direction of cyberspace operations, strengthens DoD cyberspace capabilities, and integrates and bolsters DoD's cyber expertise. 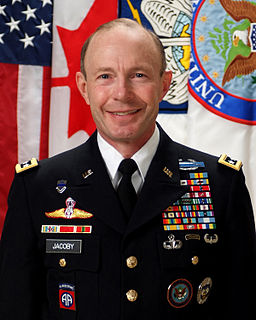 Charles Hemming Jacoby Jr. is a retired United States Army general who served as the fifth Commander of United States Northern Command (USNORTHCOM) and the 22nd Commander of North American Aerospace Defense Command (NORAD). Jacoby was the first army officer to assume command of Northern Command. He previously served as the Director for Strategic Plans and Policy, The Joint Staff. He assumed command of USNORTHCOM and NORAD on August 3, 2011, and was succeeded by Admiral William E. Gortney on December 5, 2014. Jacoby is notable as the first non-command pilot to serve as commander of either NORAD/USNORTHCOM, as both commands have traditionally been dominated by Air Force officers and NORAD carries a heavy air interdiction mission. 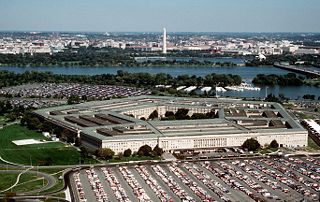 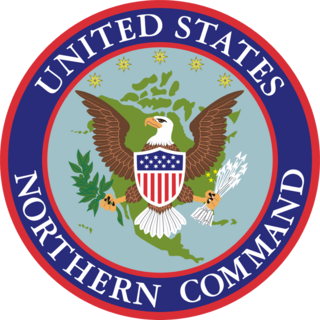 This is a list of all commanders, deputy commanders, senior enlisted leaders, and chiefs of staff of the United States Northern Command.