GamesTM (styled as gamesTM) was a UK-based, multi-format video games magazine, covering console, handheld, PC and Arcade games. The first issue was released in December 2002 and the magazine was still being published monthly in English and German up until the last edition was published on 1 November 2018.

Besides covering all current and recent happenings in the video game world, the magazine included a retro section at the rear, with reviews of past games and "battles" between older consoles.

As a standard, it was around 112 pages long. News articles, developer interviews and the like were located at the front, with the preview section following. After the previews there was usually a large feature focused on a particular game or games company. This feature normally lasted 4 to 5 pages. The section for readers' letters followed, at the end of the magazine.

Since it was a multi-format magazine, a large number of games on all formats were reviewed, although the majority of released games were not reviewed because of space and deadline restrictions.

Reviewed games were given an overall score marked out of 10. While several games have received 9/10, only sixteen games in the magazine's history achieved the ultimate score of 10:

In addition, the online modes of Project Gotham Racing 2 , Halo 3 , LittleBigPlanet , Monster Hunter Tri and Halo: Reach all scored a 10, although the single-player of each title only received an 8 or 9.

The magazine had also started to review game related hardware on occasion as well as aspects of Xbox Live. These typically included games available for purchase on the Xbox Live Marketplace and various retail games with Live functionality.

In January 2006, the future of the magazine became uncertain after its publisher, Highbury Entertainment, went into administration with debts of GBP £27 million. No subscribers received issue #40 and the next issue (#41) did not appear in the shops, though it should have been out on 26 January 2006. At that time, the magazine's staff could not be contacted and calls to the subscription helpline led to an automated message that said all magazines had been sold. The magazine's website went offline but was available again a few days later.

On 20 January 2006, Imagine Publishing announced that it had acquired GamesTM along with 23 other Highbury titles. [7] [8]

Imagine Publishing has since announced that it will continue to publish GamesTM, resuming with issue #41 which was published in February 2006.

Issue #42 was released on 23 March 2006, with an explanation from its new editor in the introduction, stating that the magazine will undergo an evolution. [9] The magazine has been published according to its usual monthly schedule since.

Issue #43 Stating that the magazine will undergo an evolution. The magazine has been published according to its usual monthly schedule since.

In Issue #62, the "evolution" of the magazine proposed back in Issue #42 finally occurred, when it received its first major overhaul since its inception. Although the content of the magazine was largely unchanged, it received a complete visual makeover as well as the addition of two new regular segments: "Illustrated" pages that highlighted influential games from the past, and "Reader's View", which gave readers the chance to have their own articles featured in the pages of the magazine.

From 3 March 2008 to 2 December 2009, a German version of GamesTM was released on a (bi)monthly schedule in Germany, Austria and Switzerland.

On 1 April 2008, the Dutch version of GamesTM was first released in the Netherlands and Belgium, with a scheduled 11 issues per year.

As of issue #68, GamesTM introduced "Industry"; a recruitment focused mini magazine built into the magazine that allows game developers, universities and colleges to advertise their job positions and related courses amongst industry focused news editorial and features.

In September 2010, GamesTM celebrated its 100th issue by releasing 100 different covers - limited to 400 prints of each - representing one of the magazine's 100 greatest games of all time. [10]

GamesTM was acquired by Future Publishing alongside the entire Imagine Publishing portfolio in 2016. [11] The last issue was published in November 2018, with Future explaining that the magazine was "no longer profitable". [11] 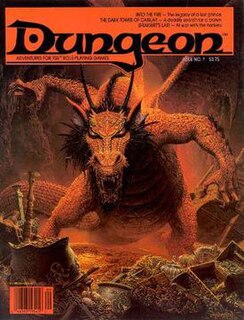 Dungeon was one of the two official magazines targeting consumers of the Dungeons & Dragons role-playing game and associated products; Dragon was the other. 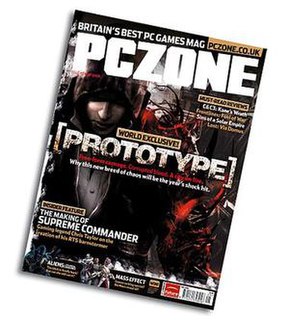 PC Zone, founded in 1993, was the first magazine dedicated to games for IBM-compatible personal computers to be published in the United Kingdom. Earlier PC magazines such as PC Leisure, PC Format and PC Plus had covered games but only as part of a wider remit. The precursor to PC Zone was the award-winning multiformat title Zero. 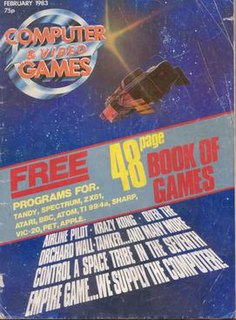 Snake Rattle 'n' Roll is a platforming video game developed by Rare. It was published by Nintendo and released for the Nintendo Entertainment System in North America in July 1990 and in Europe on March 27, 1991. It was ported to the Mega Drive and released by Sega in June 1993. The game features two snakes, Rattle and Roll, as they make their way through eleven 3D isometric levels. The object is to navigate the obstacles in each level and eat enough "Nibbley Pibbleys" to ring a weigh-in bell located in the level, which will allow the snakes to exit. The game can be played by a single player or by two players simultaneously.

Computer Games Magazine was a monthly computer and console gaming print magazine, founded in October 1988 as the United Kingdom publication Games International. During its history, it was known variously as Strategy Plus and Computer Games Strategy Plus, but changed its name to Computer Games Magazine after its purchase by theGlobe.com. By April 2007, it held the record for the second-longest-running print magazine dedicated exclusively to computer games, behind Computer Gaming World. In 1998 and 2000, it was the United States' third-largest magazine in this field. 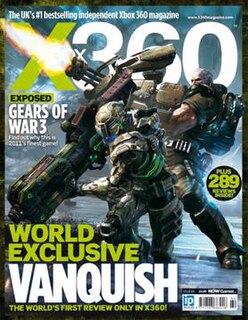 XONE was a monthly magazine produced by Imagine Publishing in the United Kingdom. XONE was the UK's #1 selling independent dedicated Xbox 360 and Xbox One magazine, covering news, previews and reviews. The magazine's community and Xbox Live also featured heavily in the magazine. 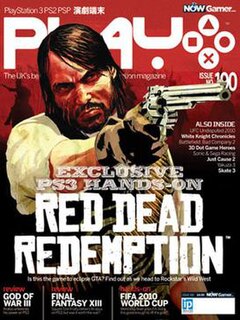 Play is a monthly magazine produced by Imagine Publishing in the United Kingdom, which reports on Sony's PlayStation product range. It is the UK's longest-running PlayStation magazine. Issue 269, the magazine's final printed edition was published in April 2016, and it has since become a digital only publication. As well as being sold in the UK, PLAY is also sold in Australia. Though because of the distance between the two countries, Australia is one month behind, so some of the information may be inaccurate or old. Prior to issue 249, PLAY came with a covermounted DVD every issue.

360 was an Xbox 360 video games magazine published by Imagine Publishing in the UK. Originally published four-weekly, the magazine switched to a three-weekly schedule in 2009.

Golf Monthly is a monthly golfing magazine published by TI Media and based in Farnborough. It publishes 13 issues a year and has a popular website. The magazine's editor is Michael Harris. It is known for being the world's oldest golf magazine and its first editor was two-time Open Championship winner Harold Hilton.